Imagine you're visiting one of those Florida alligator farms where tourists can see brave handlers wrestling enormous crocodilians. The handler straddles a 10-foot gator, then asks for a volunteer to come up and assist. Being the daring (a.k.a. stupid) type, you jump at the chance. As you stand before the audience, the handler pries open the maw of the gator, then says, smiling, "While I hold his mouth open, you stick your hand inside."

The first (and last) time I went noodling for catfish, when my companions urged me to insert my hand in a dark underwater hole to feel for a catfish, I felt like that tourist. Like an idiot, I had volunteered for this mess, and my pride said, "You have to stick your hand in now, or you'll look like a wussy. So stick it in, stupid."

So what did ol' Stupid do? He took a deep breath, dove beneath the water and reached into the hole.

At this point in your first noodling excursion, many questions muddle your mind. How did I get myself into this? Will there be a cottonmouth in this hole, or a beaver, or a snapping turtle? Do alligators live in these parts? If a catfish is home, will it really bite hard like they say? How bad will it hurt? They say big cats will swallow your entire hand, start spinning and rip the skin off your arm. What will that feel like? How did my noodling instructors get the nicknames Nubbins and Three-Fingered Jack?

Noodling is the most ancient form of catting. No equipment is used. No hooks, no lines, no poles or reels. No tackle of any sort ... unless you consider your hands tackle.

It's an extreme sport by anyone's definition, ranking right up there with bull fighting, skiing Mount Everest, parachuting off waterfalls and walking tightropes stretched between city skyscrapers. Some call it foolish. Others label it idiotic. None would deny, however, that those who catch catfish bare-handed are a special breed. 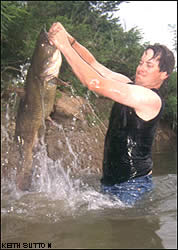 Several terms describe the practice of hand-grabbing catfish. "Noodling" is almost universal, not surprising when you realize this is derived from the word "noodle," meaning a very stupid person; a fool.

It's hard to imagine the first brave soul who reached underwater and probed a dark, watery nook for dinner. But imagine it we must, for noodling leaves no traces. It is, as one writer describes it, "as emphemeral as some of the boasts it inspires."

Trader-historian James Adair was perhaps the first to leave a written record when, in 1775, he described "a surprising method of fishing under the edges of rocks" among Southern Indians.

"They pull off their red breeches, or their long slip of Stroud cloth, and wrapping it around their arm, so as to reach the lower part of the palm of their right hand, they dive under the rock where the cat-fish lie to shelter themselves from the scorching beams of the sun, and to watch for prey: as soon as those fierce aquatic animals see that tempting bait, they immediately seize it with the greatest violence, in order to swallow it. Then is the time for the diver to improve the favourable opportunity: he accordingly opens his hand, seizes the voracious fish by his tender parts, hath a sharp struggle with it … and at last brings it safe ashore."

Today's noodlers are driven more by the desire for excitement than pangs of hunger. And despite the stereotypical image of the noodler as a rough-cut "river rat" of a man, participants come from all walks of life. One of the sport's best spokespersons was Kristi Addis, Miss Teen USA 1987. Addis told judges at the pageant that one of her favorite pastimes was "grabbling for catfish on the Yalobusha River" in Mississippi.

To become a noodler yourself, you must be brave enough (or foolish enough) to reach into an underwater hole and extract the occupant. At times, this is simple. The occupant becomes infuriated by your intrusion and chomps down on the offending appendage. You drag it to the surface and hope your buddies quit laughing long enough to beat it into submission.

If the creature is a catfish, your friends will pat you on the back and tell everyone how you bravely fought the beast. If it is, instead, a snapping turtle, snake or muskrat, they'll ask why you stuck your stupid hand in a hole where you couldn't see.

The hole you reach in may be an old muskrat or beaver burrow, a crevice beneath a rock, a hollow log or any underwater cavity. Catfish occupy such nooks at times year-round, but are most likely to hole up during spawning season when laying, guarding, and fanning their eggs.

Most noodlers enter shallow water  never as deep as the noodler is tall  to probe likely catfish hideouts. Sometimes the hole is partially blocked with rocks, small sandbags or the noodler's body to prevent the catfish's escape. If it's spawning season, however, this is unneccessary. Catfish guarding a nest seldom abandon it.

When a hand is inserted, the fish may nip, bite or, if large enough, engulf the noodler's hand. The cat may spin, causing the sandpaper-like teeth to shred the noodler's skin. For this reason, some noodlers wear gloves, though most believe this hinders the sense of touch necessary for determining the type of creature in the hole, its position and the best method for gaining a handhold.

At this point, the reason for working in shallow water becomes crystal clear. If one cannot quickly stand with mouth and nostrils above the water, he might find himself in a sticky predicament. Even then, battling a 50-pound-plus cat to the surface  and this is often done  may require extraordinary effort. Many square inches of the noodler's hide may be removed in the process. Occasionally, participants have drowned.

The closest most folks will come to hand-grabbing catfish is reaching across the table and snatching a fried fillet off a platter. That's also dangerous, but only when you're sharing a table with hungry friends, and there's only one fillet left.

Me ... well, I was stupid enough to try hand-grabbing the old-fashioned way. When I reached in that hole, a catfish was home. It didn't bite. It didn't spin. Instead, it shot from the hole like a torpedo from a submarine tube, and smashed square into my chest. Those standing on the bank above me saw lots of bubbles rising to the surface as the air left my lungs. Then they watched, amazed, as a 250-pound man lept from the water and onto shore, much like a migrating salmon ascending a waterfall.

Blood dripped from my arm where the catfish's spines had brushed me.

"Something bit me," I said, breathlessly. "A snake or a snapping turtle, maybe. I'm done noodling."

"Ah, c'mon, Stupid," Nubbins said. "We're going over to the Hole-tel on Barksdale Lake. Ain't no snakes or snapping turtles there. Only real big catfish."

I counted my fingers. Ten. I still had all ten.

My noodling adventure ended then and there.