Two-time adventure racing world champion Danelle Ballengee has her dog and a search and rescue team to thank for saving her life after she spent two nights in sub-freezing weather near Moab, Utah, last week.

Ballengee, 35, of Dillon, Colo., has competed in adventure races in the wilds of Canada, Mexico, Sweden, China, Argentina, Fiji and Morocco. But it was a relaxing two-hour trail run with her dog that nearly did her in.

She started what she thought would be a casual 10-mile run from the Amasa Back trailhead south of Moab around noon on Dec. 13. Temperatures were in the low 40s and she was wearing light running pants, two lightweight running shirts, a lightweight fleece top and sunglasses. She also carried her iPod and a small hydration pack.

Midway through the run, Ballengee slipped on a patch of black ice near Hurrah Pass and tumbled about 60 feet down three successive rock faces, each of which was 10 to 25 feet below the next. After crashing to the bottom of a rocky canyon, she knew she wasn't paralyzed but was in too much pain to stand.

Although dazed and in severe pain, she managed to crawl about a quarter mile on her hands and knees over the next five hours before darkness set in. During the night, she did sit-ups and kept her upper body moving to keep warm. She drank snowmelt from a puddle when the water in her pack ran out and ate two packets of raspberry energy gels that she carried on the run.

A Grand County (Utah) search and rescue team on all-terrain vehicles found her at about 3:30 p.m. on Dec. 15 after her dog, Taz, a 3-year-old German shepherd/golden retriever mix, led rescuers on a five-mile journey to her. Ballengee had spent 52 hours in the wilderness in temperatures that ranged from the low 20s at night to the mid-40s during the day.

On the first night in the cold, Taz slept with his head on Ballengee's stomach, but during the second night he was hesitant to get near her.

"The first night I couldn't really cuddle with him because I had to stay on my back, but he cuddled next to me and helped keep me warm," she said. "But the second night he either got mad or he got a plan in his head. Either way, I just can't wait to give him a big hug. He definitely helped save my life. I don't know if I would have made it out there another night."

Ballengee said she wasn't sure when Taz left because he was gone for a while and returned a couple of times.

After shivering throughout the first night, Ballengee said she was glad to feel the warmth of the sun but frustrated that she had not been found. She said several prayers, even though she says she's not religious. She said she thought about Aron Ralston, the Colorado adventure athlete who cut off his right arm with a pocket knife after getting stuck under a large boulder in southeastern Utah in 2003.

"I did think about him because I read his book," Ballengee said. "I thought about my family and my friends and everything I do, and I just kept saying to myself, 'I can't die. I'm not ready to die.' But it would have been so easy to relax and curl up and die." 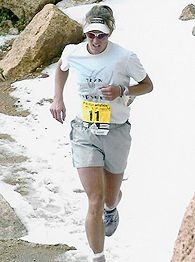 Ballengee, a professional athlete and personal trainer, owns a second home in Moab and spends a lot of time running, cycling, climbing and paddling in the area, sometimes with friends but often just with Taz. When she hadn't been seen for more than 24 hours, Dorothy Rossignol, a Moab neighbor and friend, called her parents in Evergreen, Colo., on the afternoon of Dec. 14.

Knowing her penchant for wild training sessions, Ballengee's parents were hesitant to react hastily. They called her close friends, but when no one knew of her whereabouts, they called the Moab police.

"With all of the things Danelle does, we didn't really want to bother people and make a big deal of it if she was just out training. But we just had a gut feeling that we needed to do something, and thank God we did," her mother, Peggy Ballengee, said. "We've told her before to be safe and leave a note about where she's going or go with someone, but that's not always possible. Sometimes she can't find someone to train with because she might be going out for a 30-mile run, then a 100-mile ride. Those are the things she does. That's her job."

Police initially searched Ballengee's Moab house for signs of foul play and notified authorities in Colorado, Utah, New Mexico and Arizona about her missing vehicle. They also searched the Colorado River and nearby lakes at the advice of her parents, who thought she might have been kayaking.

Moab police found Ballengee's pickup truck at the Amasa Back trailhead at 12:30 p.m. on Dec. 15. The search and rescue team was organized and a volunteer pilot began searching from the sky.

As the search team gathered at the trailhead, a dog matching the description of Taz was spotted by police a couple of miles down Kane Creek Road. It was heading toward town but suddenly changed directions when authorities tried to apprehend it.

"We were going to try to identify the dog, but the dog basically didn't want to be caught and instead turned around and headed back toward the trail," said Curt Brewer, chief deputy of the Grand County Sheriff's Office. "When that happened, the search crew decided to follow the dog. And the dog took our rescue personnel right to her. I think we would have eventually found her, because we were in the right location, but the dog saved us some time."

The rescue team made verbal contact with Ballengee at 3:38 p.m. and reached the accident site shortly thereafter. A helicopter airlifted her to St. Mary's Hospital in Grand Junction, Colo., where doctors determined she had broken her pelvis in four places and suffered severe frostbite on her feet. She was bleeding internally and had numerous cuts and bruises on her hands and knees.

Ballengee was flown to Denver the next day and had surgery Tuesday to insert a titanium plate and titanium pins into her pelvis and sacrum.

Doctors have told her it is unlikely she will lose any toes, but it could be two to six months before she can walk again.

"We just feel so fortunate that she's alive," Peggy Ballengee said, while fighting back tears. "We're glad she's not paralyzed. I know she's in pain, but I told her it's better to feel the pain than to feel no pain." 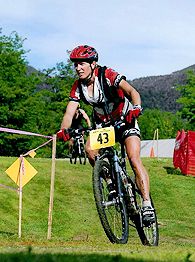 As an adventure athlete, Ballengee has already experienced her share of physical adversity and injuries. Adventure racing is an endurance sport in which coed teams of three athletes mountain bike, paddle, hike, climb, run and navigate through the wilderness in events that last from three hours to seven days.

During an adventure race in 2000 in Borneo, a leech attached to one of Ballengee's eyes. That led to a corneal ulcer that left her blind for three days.

In 2005, she tore a ligament in her right ankle. But instead of taking time off to recover, she completed several adventure races ranging in length from six hours to six days. Last summer in the Primal Quest Expedition Race in Moab, Ballengee's feet blistered so badly from trekking across hot desert terrain that, at times, she could barely stand. But she somehow managed to finish the race with her teammates, albeit dropping from first to ninth place.

"She's tough as nails," said Dave Mackey, a friend and adventure racing teammate. "She's a pretty strong, independent person. But she got lucky in this case that she was found."

Ballengee's athletic resume looks like something you'd see on the back of a Wheaties box. She's a four-time winner of the Pikes Peak Marathon in Colorado. She once finished 13th in the Hawaii Ironman. In 2000, she set a women's record by hiking up and down all 54 of Colorado's 14,000-foot peaks in 14 days, 14 hours and 49 minutes.

She helped Team Nike win two adventure racing world championships in 2004, one in Argentina and another in Canada. Last March, she placed eighth at the Winter Triathlon World Championship in Sjusjoen, Norway, an event that included mountain biking, skate skiing and running on snow.

And she's earned six U.S. athlete of the year awards in four different endurance sports: adventure racing, duathlon, mountain running and triathlon. But it was her most loyal companion and not so much her athletic prowess that saved her life.

"It's an amazing story of survival," said Mike Kloser, a former adventure racing teammate from Vail, Colo. "Her dog really wound up being her saving grace. I know her parents have since said it, but it's a lesson learned to tell people where you're going."

Ballengee said she has run the loop on Hurrah Pass several times. Most of it is on Jeep roads, but a small section of it is on a rugged single-track trail that requires a bit of hand-over-hand scrambling.

"I knew it was icy and I was being very careful, but my foot just slipped," she said. "The next thing I knew I was just sliding and there was no way to stop until I hit the bottom.

"I'm just happy to be alive. It was a horrible accident, but a fortunate turn of events saved my life. My dog is so awesome. He has no idea how important he is. He deserves a big reward  like a big steak."