And I hate them, too.

That love-hate relationship has much history behind it, starting when I killed my first Rio Grande gobbler 15 years ago.

Since that humble beginning, there have been more than a few moments of triumph when I have been blessed to tag a big longbeard.

There also have been plenty of defeats  a collection of hard-luck gobblers that have been henned up, hung up or hushed up  or flat-out missed by yours truly.

In case you think my turkey-hunting love/hate complex is without merit, take this spring's recently completed season as further proof.

Prior to the campaign's start, I was mentally tabulating my spring 2006 taxidermy bill, not to mention my favorite recipes for cooking succulent turkey meat for the table.

After all, I had a number of trips planned, starting off with my pal Doug Rodgers, a turkey-hunting fanatic with access to some of the best gobbler land north Texas has to offer.

Following that opening weekend hunt, a visit to the longbeard-rich Halff Brothers Ranch in south Texas with my good friend John Hafner of Realtree had the plot of my spring-turkey saga thickening.

Next up was a journey to Colorado to hunt Merriam's turkeys with the National Wild Turkey Federation's Jake Fagan and Paul Rackley in some of the continent's most rugged and beautiful terrain.

And with the possibility looming of capping the season off by chasing Eastern gobblers in Kansas with my hunting buddy Casey Ingold, and well, it looked like a three-quarter turkey slam in the making.

Except that I forgot that sage Biblical advice from King Solomon, the warning about pride going before the fall. 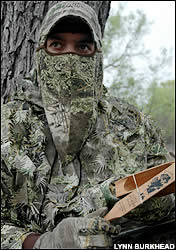 Especially for a spring turkey hunter counting his chickens  or is that poults?  before they hatch.

Fast-forward to the season's opening salvo in Texas as I stood in the pre-dawn glow with Rodgers listening for the first gobble of the day  and the season.

Problem was it never came.

On a lease that Rodgers had never failed to hear a gobbler sound off on  in 13 years of hunting, mind you  we struck out.

Not to worry, though, since in a matter of days I would jet off to chase longbeards in south Texas country so lousy with them that the gobblers have to stand in line and take a number before sounding off.

Except that it didn't quite work out that way since the lockjawed birds scarcely uttered a peep.

Thanks to the silence of the toms, the hunting was tough, even for veteran gobbler getters not used to this rude side of Texas' supposedly "easy" reputation for tagging Rio Grande longbeards.

By hunt's end, I had endured three close, but not close enough encounters.

One had come when two hens appeared silently just out of shotgun range, towing behind them a lovesick longbeard in full strut.

Had I not seen them before they disappeared into the brush  ignoring my calling, I might add  I would have never even known that they were there.

Another morning, Hafner and I teamed up to try and outsmart twin longbeards that suddenly remembered how to gobble.

Despite our best tag-team calling efforts  Hafner is a virtuoso on a slate call  the two toms gave us the slip after apparently stumbling onto some real, live hens while moving in our direction.

With a midday flight back home looming, Josh Miller and I gave the south Texas gobblers one last morning try, hoping for a storybook ending to my hunt.

We nearly got it, too, suddenly surprised by a giant Rio Grande gobbler silently strutting into view with a half-dozen hens at his side.

While that big bird closed to within 35 yards of my shotgun's bead, thick brush screened him off and kept me from getting a completely clean shot.

Better to let him walk away unscathed  which I reluctantly did  rather than to risk wounding a grand longbeard in the thick south Texas brush.

Besides, a few days later, I would find myself on an epic backpack spring turkey hunt for Merriam's deep in Colorado's mountainous backcountry.

Soon I was hiking high onto the continent's spine with Fagan, Rackley, and Outdoor Life's John Taranto.

From epic meals of freeze-dried stroganoff  hey, anything tastes good after a day of lung-burning hikes at 10,000 feet  to a crazy mix of spring weather from cold and light snow to sunburn and searing heat back to cold and snowflakes, again , this trip had it all.

This included close encounters with various wild critters ranging from black bears to elk to mule deer to a group of Rocky Mountain bighorn rams.

While certainly ranking among the best outdoor experiences of my entire lifetime, our band of hunting brothers failed to tag a Merriam's gobbler during that vertical week of hunting, despite several close encounters.

I did, and with the price of gas up in the stratosphere, I decided to lick my turkey-hunting wounds, scrub my Kansas trip and stay close to home.

Which is why the last Saturday of the Texas season found yours truly chasing longbeards one last time with my pal Rodgers.

As dawn broke, my turkey-hunting misfortune appeared to be about to change, thanks to the chorus of gobblers sounding off as the sun's arrival approached. 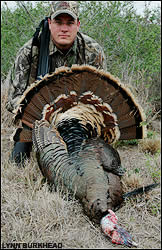 Surely one of those lovesick longbeards would stumble into shotgun range to provide a fine ending to my less than memorable 2006 spring turkey hunting campaign.

But, again, the best-laid plans of mice and turkey hunters don't always pan out, even on the last weekend of the season.

Just as it began, my spring ended with a wallet full of unused turkey tags.

Against that backdrop, let me say that I can't wait for next spring's turkey hunting season to arrive.

With any luck, however, I can only hope that the powers that be will cancel next spring's hunting, a move that will undoubtedly leave more time for counseling.

Because after a spring season in which birds with a brain the size of a pebble beat me up, yet again, I'm going to need it.