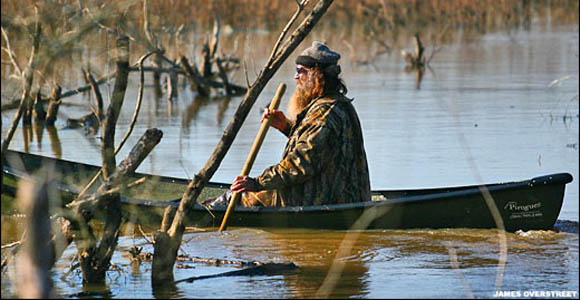 Dinner at the Duck Commander's house tonight, it's obvious upon entering, will come off a cold slab of marbled beef on a chopping block next to his island counter.

The man himself reclines in front of a windshield-sized TV near the hearth as his rat terriers bumble around the living room.

At the feeding hour, Phil Robertson  the aforementioned Duck Commander, an icon in hunting, surely one of the only men ever to be named after his own duck call  ambles to the kitchen, peels away a half-dozen steaks each the size of a large man's footprint and arranges them on the griddle.

"We like rare steak, and all that," he says, almost apologizing for using a recipe that involves searing the steaks then baking them in cast-iron kettles with butter, salt, pepper and green onions.

He is a tall man, 62 years old, clad ankle-to-wrist in forest camouflage, with long hair hanging in mats over his suspension-bridge shoulders.

His graying beard is a testament to how much credit he gives his prey: it juts to his sternum like a hornet's nest, grown as natural camo; when hunting, he paints his face with black costume grease, erasing but for his eyeballs any resemblance to a man.

His anonymity recedes at forest's edge. In college, Robertson was a star quarterback at Louisiana Tech, where he started ahead of a discouraged Terry Bradshaw for two years. He had NFL offers he declined; he worked in the gas fields; he put his master's in education to use teaching school.

None of these were for Robertson. Instead, he moved to the woods, invented a duck call that has become the industry standard, pioneered homemade duck hunting videos and has become a celebrity on the hunting and religious circuit, hawking T-shirts, posters and even his own line of Cajun seasoning.

Yet the backwoods life remains simple for the Duck Commander and his cadre of "Duckmen"  his sons, mainly  who have joined him to build this ducky empire.

A call of the wild

If you are to participate in the eating, you drive your pick-up, preferably, off I-20 near West Monroe, La., past the horse pastures and pine trees, past the slouchy swamp shack bar up the road called Memories, past the restaurants offering all-you-can-eat crawfish, the sprawling paper mill that stands shadowed under its own smoke and the shop with the "We Crack Pecans" sign out front.

At a break in the trees, workers install a gas pipeline in a deep ditch that when finished will reach from Mississippi to Texas. It is the last sign of commotion for some time.

Then, beyond the shot-up speed limit signs and the notary public with a four-wheeler in the front yard, Robertson's own slice of heaven spreads out at the bottom of a hill.

When he first drove this road 27 years ago, none of the stray homes had been conceived  it was only the wild acres of duck habitat.

His son Jase says that when Robertson saw that beautiful splay of water, he told the salesman he'd take it — even before he reached the house.

Robertson killed his first ducks at age 11, stripped naked to swim across and retrieve them, then ran home to show his father.

It is the sound of ducks moving through the air that hooked him, he says.

When he finished college  spurning NFL offers that would have paid modestly, but brought a risk of injury  he instead worked as a commercial fisherman.

After fishing season, he would pack up his calls and make the rounds to sporting goods stores.

He figured he'd find fertile ground in Stuttgart, Ark., home to the World's Championship Duck Calling Contest. But there, someone told him he'd never sell duck calls unless he became a champion caller himself. That is, unless he played a call so long and loud he could be mistaken for a minimalist bagpiper.

When Robertson relates this story, always with the squinty-eyed look of someone applying basic horse sense to hogwash, he says his reply was: "Could a duck win it?"

No, the reply came.

The Duck Commander call never won a trophy, but Robertson did eventually get it into a few stores, and then into a Wal-Mart, then a second, then a dozen.

Finally a manager from the chain's headquarters called to ask him why he wasn't doing business directly with the mother ship.

Today his second-eldest son, Jase, is lead craftsman on the calls, working in a corrugated shed workshop beside the house.

In 2006, they assembled and shipped 90,000 of the things via the UPS trucks that arrive twice daily.

The shop, all open boxes and exposed fiberglass insulation, has changed little over the years. Jase still has his original "dimpler," a handheld tool that gouges a nub between the two reeds to allow errant bits of dipping tobacco to escape.

The success of the calls led to the videos. They began as instructional tapes  and virtually underground, at that  in the late '80s. It wasn't until Wal-Mart picked up the third edition that it exploded.

Annually the Duckmen move tens of thousands of DVDs, and do so at about 50 percent more than other titles in the genre cost.

"It's a lot of money transacting," Jase says, "but not much profit."

The other prong of the Duck Commander's success has been his own brand of natural law revivalism he issues to churches and organizations who invite him to speak.

The first of these talks Robertson gave, at a trade show in New Orleans about 20 years ago, was an impromptu rant about the Ten Commandments and duck hunting and the state of the union.

Enough people applauded that he thought he might have something. Today there's a two-year waiting list, he says, to book him. He has changed the speech little in the intervening years, he says, because he still delivers it to small crowds who have not heard it before, and it still slays.

One biblical interpretation he often recites  and it is germane while the beefsteak cooks  is of Noah's exit from his ark.

God has destroyed every living thing from the face of the planet except for Noah's family and the menagerie on the ark, then proceeds to tell Noah that henceforth the fear of Noah shall be upon every beast, every fowl, everything crawling on the ground and every fish, and that they are to become food for humankind.

"God's talking to Noah," Robertson says. "He says, 'I have given them into your hands. Everything that lives and moves will be food for you.' He was basically saying, 'Whack 'em and stack 'em. You have my blessing. Do it.'"

After the steaks are reduced to gnarled wads of fat, the potatoes are ravaged and the gravy is mopped up and the mayhaw jelly (homemade from wild berries) meets its last piece of toast, Robertson retires to his recliner, talks a while, then announces he's hitting the hay.

The morning will bring hot coffee and, here's hoping, a stack of whacked ducks. [NEXT PAGE]