Eight hours into butchering my first Alaska moose, I caught myself mumbling the same phrases over and over.

"This is not humanly possible," and "never again."

Stepping back from the massive pile of moose every so often to survey my progress  and scan the horizon for incoming bears  I struggled to stay positive and approach the task as a series of small jobs versus one big one.

Other than brown bears and nightfall, my biggest concern was that the backs of my hands and fingers were so swollen from the constant attacks of biting flies, I could no longer bend my fingers at the knuckles.

And I was nowhere near completion.

The good news was that other than a couple of birds that would swoop in every few minutes to steal a chunk of moose meat  oh, and a frustrated red fox  no one heard my whining except me.

I was alone. After three years of trying, I had finally found, stalked and killed an Alaska bull moose without the help of a guide, outfitter or companion.

As my success illustrates, it is entirely possible to hunt and harvest a moose in Alaska without the aide of a guide or even outfitter. The sacrifice required to kill and move the biggest deer in the world, however, is not for everyone.

Do-it-yourself moose hunters need to be prepared and thrill at the prospect of getting into trouble; because in the Alaskan wilderness, otherwise small crises often become complex and life threatening.

And if a person's first confrontation with a serious injury or life-threatening situation happens while alone in the Alaskan wilderness, it could be disastrous.

Planning well ahead of time, admitting personal limitations and going into it with realistic expectations of what constitutes a successful hunt are the keys to coming home happy  and alive.

Though there are ways to hunt moose in Alaska without the aide of a guide or outfitter, it is completely necessary to hire an air-taxi operator. They transport hunters and their own gear to and from a hunting area and that is all. Some will recommend a spot, while others drop hunters wherever the hunter designates.

(By contrast, an outfitter supplies hunters with varying amounts of gear and generally only drops off and picks up; whereas a guide often can be expected to find your moose, take you to it, butcher and pack it out, as well as keep you warm and well fed throughout the entire hunting experience.)

When choosing an air-taxi operator for a guideless hunt, know that the best bush pilots are long-time Alaska residents who fly over their state all year. 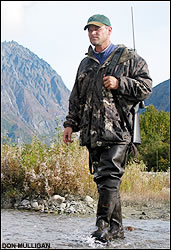 These guys know where moose live, not just moosey-looking spots that happen to be near a smooth runway. Do-it-yourselfers should be cautious of pilots who migrate to Alaska from the lower 48 states every fall just to transport hunters for a month.

Good, local air-taxi pilots can offer a lot more than just a good hunting spot, and guideless hunters should heed their advice if they find the real McCoy.

"People have no idea how big these animals are, how big this country is and how hard it is to hunt here," said Mike McCrary, owner of Alaska Bush Sports and an Alaska resident and air-taxi operator for the past 28 years.

"Especially when moose hunting without a guide, the percentage of kill is directly related to the condition, persistence and character of the hunter," he added.

And regardless of what advertisements might claim, the best moose hunting in Alaska is always at least two plane rides away from Anchorage.

There are several air-taxi operators flying out of Anchorage, and many of them transport successful moose hunters every year. On the whole, however, the most successful hunts and biggest bulls come from hunts operated from more-distant locations.

Remember, Anchorage is home to the largest float-plane port in the world, because almost everyone there is either a pilot or has a cousin who flies. There are places to moose hunt within one round-trip tank of airplane fuel from Anchorage, but hunters should expect to see as many other hunters in those locations as they do game.

Better moose hunts stage out of places like Naknek, Aniak, Dillingham and Galena, each of which can be reached by commercial jet service from Anchorage for around $500.

But in order to decide where to hunt, a guideless moose hunter must first decide what he expects from the hunt, as well as his or her physical and mental limitations.

"If it is a once-in-a-lifetime hunt, most hunters are probably better off paying for a guide, or at least choosing an area with high densities of moose," said Bruce Bartley, spokesman for the Alaska Division of Wildlife Conservation.

The trade off, Bartley said, is that areas with the most moose are not typically the best places to find a trophy-size bull.

Trophy spots are generally so sparsely populated with moose it is common to hunt for a week without seeing a single animal. Guideless hunters who choose trophy areas need to be prepared to return for several years in a row in order to tag a behemoth bull.

Hence, these hunters need to be able to find value in the entire experience, not just the harvest of a bull.

That was the case in 2004 for solo hunter Rene Kalkebrenner, who had hunted previously for three years before he finally got a shot at a moose on the Alaska Peninsula.

After eight completely mooseless days of hunting, he looked up from his freeze-dried lunch and saw a bull wandering across the valley in front of him. Minutes later his three-year wait was over, and he had a 72-inch-wide Alaska-Yukon moose to show for it.

Not many 70-plus-inch moose are killed anywhere these days. But without a doubt, the Alaska Peninsula is the best place to find one. More specifically, area 9E in the middle of the peninsula produces several massive bulls every year.

For the hunter who wants a better chance at filling a tag but doesn't yearn to kill a bull with antlers that resemble sheets of drywall, areas from Fairbanks south to the Alaska Range are a good bet. In particular, some of the highest moose densities in the state exist along the Tanana River Drainage where it flows north of the Alaska Range.

Regardless of how big the antlers are, however, they still only represent the last trip in a butchering and packing job that not everyone can handle alone.

Practically any legal bull moose in Alaska will weigh in excess of 1,000 pounds. And before anyone reasons that most of that is waste to be left for the scavengers, they better check the regulations and understand the wanton-waste rule.

According to the regulations, successful moose hunters must salvage all of the meat, except for meat on the head, the guts or that which is damaged by the bullet or arrow.

I was once told by an Alaska State Trooper that he interprets the rule to mean he better be able to see ground through the animal's rib cage when he flies over.

That leaves a lot of meat to haul out. When you include a cape and antlers, it usually means at least 10 trips for someone capable of carrying 80 pounds on their back  which is where I found myself in 2003.

Looking back, it was well worth the agony.

However, I didn't purchase a moose tag for this year's guideless Alaska hunt; caribou are half the size, and taste just as good.