MONTROSE, Colo.  Hunting mountain lions may not be as popular as the pursuit of deer or elk in Colorado, but it certainly has an active following.

The long-tailed cats are spread across the state, with the heaviest population density in the western two-thirds of the state.

Different outfitters and Department of Wildlife officials give different opinions on the average size of a male cat, but DOW estimations are from 100 to 160 pounds.

Depending on the time of the year, lions can be found in very diverse topography in Colorado, with the exception of way up in the alpine, up above timberline and up in some of the heavy coniferous forests, 8,500- to 10,000-foot elevations.

You won't find many lions at those elevations. Some cats can be found in the aspen, oak brush, mahogany type of communities.

A lot of lions are found in the pinion, juniper and sagebrush communities. 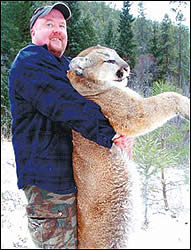 In matter of fact, the DOW has an ongoing study of mountain lions to learn more about the big cats.

"First of all we're trying to find out movement patterns, how they're using the landscape, which ones are leaving, younger males versus younger females," said Bill deVergie (970-252-6000), wildlife manager for the Montrose area office.

"We are looking for density and numbers available. Mountain lions, because of the wide area they roam, are the hardest species to do any counts or inventories. By going out there and marking them, you know where that animal is."

Marking refers to the fitting of tranquilized lions with telemetry collars.

The study is taking place in the northwest portion of the southwest part of the state. This area has been closed to all lion hunting.

The southern portion of Game Management Unit 61, all of 62 and a portion of Unit 70 are included. The rest of the state is open for hunting.

"We want to see how high we can let this population go," said deVergie.

"We're going to try to estimate what the population is for the next five years, see what kind of increase we can get without hunting, see how many lions we can get."

"Then after five years we're going to open it up to hunting and bring that population back down."

Through the use of watching the population growth and harvest figures, the department is trying to measure the effects of harvest so that they can establish yearly hunting quotas.

Hunting for mountain lions is accomplished predominantly through the use of dogs.

"Some people can call them and spend a lot of time without dogs, but it's not nearly as efficient," said deVergie.

"People drive around with their dogs looking for tracks in the snow along the sides of a lot of the Forest Service/BLM private roads."

"If they find some that look fairly fresh, they turn the dogs out and start following them. The dogs are barking and the cats go to the tree."

"They're basically hunting them by scent until they're treed, caved or ledged out where the hunter has a chance to take the lion, if they want it. Without a dog you can find tracks, but you'd be walking forever."

Lawrence Zeldenthuis hunts lions in the west-central part of the state. "We start looking for tracks," he said.

"Once we find track we do our best to warm that track up to one to two nights old. Then we start trailing through with hounds. Lions travel. An old tom may have a 200 to 300-mile radius that he travels."

"If we find his track three or four days old, then we're going to start looking in the direction that he is going and cutting way out front of that track."

"We try and find where he has come through someplace, warming that track up to a night or two nights old. Generally we catch up with him in the same day, but sometimes it takes a couple of days."

"Lions move at night," Zeldenthuis said. "During the day we're actually trailing that lion where he's been through the night. Out here you catch a lot of lions on the rims, in the rocks. A lot of trees are not big enough to really hold a lion."

"We like to wait until we get a good tracking snow, then our guides will go out and cut fresh tracks," he said.

"We like to measure those tracks to know that we're looking at a lion the size we want to take. Then we call our clients to see if they can be at the ranch in 24 hours."

"From the rear foot to the front foot, the distance is measured. We can estimate how long the cat is. A good cat will go 7 feet and that's what we're looking for, a 7-foot stride."

"We take the dogs out with the hunters and work the tracks from the freshest point," he said.

"Turn the dogs loose and let the dogs trail again. Hunt time varies, anywhere from 30 minutes to three hours, depending on how far the cat is."

Good dogs are the most important part of the hunting equation. "A dog is measured by his heart and willingness to hunt," said Isenhour.

"Most hounds, black and tans or redbone hounds, or a mixed breed of those type of dogs, do very well. We like the redbones and what we call 'blackmouth cur' dogs."

"They do pretty well when they're really interested. It's based on a dog's personality. Is he interested in hunting, is he is interested in running a cat versus a deer or elk? We want to make sure the dogs stay on the cats and not run big game animals."

"To be able to keep a cat treed, I like four dogs, anywhere from three to six, said Isenhour.

"You got to have enough dogs to keep the cat occupied. Don't have so few dogs that the cat can focus on any one particular dog. These cats are lethal. They can kill a dog in a heartbeat."

"They get bit quite often. These cats get pretty smart. They'll tree and then jump out of the tree as the hunters and guides approach and the chase is on again."

"Sometimes they get cornered where there is no tree, and there a pretty good fight goes on. The dogs get slapped, bit and beat up pretty good."

Sometimes the hunt can be physically demanding tracking down the big cats, but the adrenalin rush as you hear the dogs' barking intensify, signaling a treed cat, is worth the effort.

As Zeldenthuis puts it, "we've run them into caves and holes, just about every crevice and crack you can think of. If you're fortunate you get them in tree."