HELENA, Mont.  There's a new myth of the West that's growing in inverse proportion to the size of the elk herd in many parts of the region. It basically said that you need deep snow to have a chance at killing an elk.

Quentin Kujala, Montana Fish, Wildlife & Parks' wildlife management chief in Helena, connected weather and harvest just this month: "If the weather favors hunters this fall and they've obtained hunting access where necessary, it could be a great year of elk hunting in Montana," said Kujala.

It's a mindset that influences plenty of hunters who don't go afield after elk until snow is in the sky.

As hunters who have successfully hunted elk in shirt-sleeve weather and in parts of the state that don't normally see thigh-deep snow can attest, you need luck and grit more than a Canadian howler to bag a Montana elk. 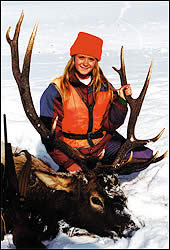 Winter weather, though, evens the odds, pushing elk to lower elevations where hunters are better able to intercept them.

Snowfall can help reveal the presence of elk by exposing their tracks, and snow can also muffle a hunter's movements.

Elk tend to feed more often, so they're more visible in daylight, ahead of and during winter storms.

So there's no doubt that a blizzard boosts elk harvest, but there are plenty of places where all you need is a general tag, a good set of boots and some time off to kill an elk.

Here are the best early-season spots in Montana, where the general elk season opened Oct. 22 and runs through Nov. 26:

This low-slung mountain range between the Madison and Ruby rivers is home to one of the largest elk herds in Montana, and for sheer numbers it's a good spot to find elk. It also has generally liberal hunting regulations.

In most portions of neighboring districts 323 and 324 this year, for instance, elk hunters can kill either brow-tined bulls or cows on their general tag.

Weather definitely aids hunters here, but elk hunters either afoot or on pack stock who stab deep into Robb Creek, the headwaters of the Ruby and Madison rivers and Blacktail Creek often have good opening-week success.

While all elk hunting in the Breaks  on both sides of the Missouri River and Fort Peck Reservoir  is by special permit only, there are so many cow tags here (somewhere around 2,500 in all the breaks units) that opening week will look like a general-tag area.

Also, in units 410 and 417 youth hunters between age 12 and 15 can hunt cows on their general elk tags. Instead of waiting for snow, try to intercept elk as they move back to timbered ridges and road-less areas after a night of feeding in alfalfa and wheat fields.

"Hunting away from roads is going to be a critical skill this year in the Breaks because we have issued so many cow tags," said FWP biologist Mark Sullivan.

"Hunting just a few hundred yards off roads can be productive here."

This portion of western Montana, specifically the Darby country at the head of the Bitterroot Valley, is full of elk. Kujala said districts 214, 250 and 270 are all over population objectives and nudging all-time record high elk populations.

These elk are chronically getting into trouble with farmers by gorging on high-dollar crops. These hayfield elk are great targets for early-season hunters.

Find a corridor that elk are using to travel back and forth between the national forest and irrigated bottomland and ambush elk as they pass.

This gentle mountain range that rises between Great Falls and White Sulphur Springs has an elk herd exceeding 2,000 animals, and just as in the Bitterroots and the Breaks, they frequent low-country cropland in dry falls.

Hunt the fringe of the Lewis and Clark National Forest, especially along private land in the Judith and Smith river valleys and along the North Fork Musselshell River on the southeast margins of the mountains.

In most Little Belts hunting districts (454, 448 and 416) general-tag hunters can shoot either a bull or a cow for at least a portion of the season. And in a pair of those units, second elk tags valid for cows were issued in the June draw.

This is one area where a dose of winter weather would aid elk hunters. But these mountains north of Livingston and Big Timber are so sheer that elk tend to stay in their lower elevations anyway, and are most abundant on adjacent private foothills habitat.

Hunt the forest boundary for elk moving back and forth to feed, and expect the most significant migrations just ahead of a major winter storm.

Elk populations in the Crazies, as well as the nearby Bridger Mountains to the west, are above biologists' objectives. Access is tough, though, so plan to stick to the National Forest land.

Elsewhere in Region 3, elk may be redistributed following wildfires on the east side of Paradise Valley south of Livingston and in the Boulder and Stillwater river drainages south of Big Timber.

And in the Gallatin River drainage and areas adjacent to Yellowstone National Park, elk populations are in decline, probably because of predation from wolves and bears.

Even with an open winter, elk hunters in Montana should exceed the long-term harvest success rate of about 17 percent. That's because there are plenty of animals out there, said Kujala, who would be relieved to see a good elk harvest this winter because it would help move elk numbers into better balance with available habitat.