I did as Ron Outz said, moving closer to the campfire to warm my backside. It was cold outside, but the coolness seemed to clarify the October air.

The stars were never brighter. I stared up at them and focused my attention on the sounds of Ron's dogs far off in the river bottoms.

I wish I could describe for you the sound made by two redbone hounds chasing a coon on a cold winter night. If I could and you had never heard that sound, you would still know what it was like.

But I can no more describe it than I can describe the aroma of a cake baking or the feel of an autumn breeze touching my skin. It can't be done.

Suffice it to say, two coon dogs out there in the darkness on a raccoon's trail have a sound all their own.

I've listened to the doleful sound of a wolf howling in the wilderness, but a lone wolf's howl is no more mournful than a redbone's cold-trail bawl.

The eerie noise of an owl calling from the darkness raises chill bumps on my skin, but not as quickly as the cry of a coon dog picking up a hot trail.

No one who has heard a pack of coyotes yipping hysterically as they chase some unseen prey can deny they sound as wild and ancient as the backcountry ridges along which they run. But when a coonhound is running those same ridges, his chorus sounds even more wild and ancient.

If you sit by a campfire on a winter night and listen to hounds, your mind is bound to wander back to a time when nearly every hunter owned a coon dog or two and followed them nightly through the woods with a carbide light on his head and a .22 rifle in his hand.

I thought about these things as I huddled by the fire that night. I listened as the dogs made those indescribable sounds. And during those hours spent listening, I was as happy as a man can be.

"They're turning back now," Ron said. "Sounds like ol' King is hot on the trail, and Rusty's not far behind."

The chase moved quickly through the bottoms, carrying the dogs and the coon away from the river. For this we were happy.

When a coon takes to water with dogs on his heels, he may swim quickly until the hounds are in the water with him, then turn and climb on the head of one of the canines. If the coon is big enough, he may drown the dog during the ensuing fight.

Fortunately, our happy state of affairs continued. The dogs kept pushing the coon our way, and when they were close, the sound of their barking changed in tone. 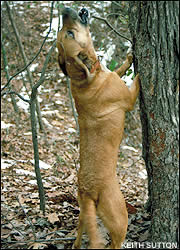 My companion disappeared into the black woods, leaving me to follow as best as I could. He reached the big oak where the dogs had treed well ahead of me, and was playing the beam of his flashlight on the branches when I arrived.

The scene under the tree was pure bedlam. The hounds were bawling, leaping and clawing furiously at the trunk.

Above the excited dogs, Ron's beam of light was playing back and forth in the treetop as he tried to locate the golden eyes of our quarry. The animal was so well hidden, we thought at first it had holed up. Then Ron spotted it.

He focused his light there, and the chase ended when I shot the coon with my rifle.

Native Americans hunted raccoons long before Europeans arrived in this country. The coon's long, warm fur was prized. The savory flesh, not unlike the dark meat of chicken in texture and flavor, was highly relished.

Early settlers hunted coons, selling the pelts for the manufacture of coats and hats. A pelt brought 25 cents in 1885, a good price in those days.

" About the time of World War I," biologist Trusten Holder wrote in 1951, "raccoons were so numerous that it was hard to grow corn. Raccoons were poisoned to protect the crop. About 1935 a low ebb seems to have been reached."

Populations continued falling during the 1930s and 1940s. Coons were hunted and trapped extensively for food and pelts during the Depression, and den trees often were cut to get at coons inside.

Many wildlife agencies started restocking and education programs to help stem the downward population trend. Sportsman's groups got together and agreed they would not cut den trees.

"With this aid," said outdoor writer Bill Apple, "Mister Raccoon made his comeback."

During the 1970s and 1980s, the price of raccoon pelts soared to its highest level as the demand for fur increased in Europe and Asia. The prime pelt from a large animal sometimes brought $25 or more, and this high price drew more participants into the sport of coon hunting.

On a good night, hunters with a well-trained hound might bag 10 or more coons and earn $200 or more for the pelts. I knew individuals during this period who quit their day jobs and hunted raccoons full-time for a living.

Heavy hunting and trapping pressure kept coon numbers in check, but raccoons are prolific and populations remained healthy throughout the raccoon's range.

Then, in the late 1980s and early 1990s, sustained campaigns by animal-rights groups against people wearing furs led to a decline in the demand for pelts, particularly in Europe. The fur market crashed. Raccoon pelts worth $30 in 1970 brought only a tenth of that in 1992. 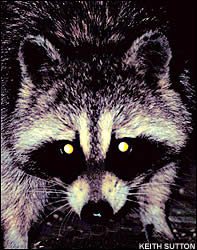 Raccoons are efficient predators of bird nests. They have been implicated in study after study of preying on the eggs and young of many bird species, from neotropical songbirds to ducks and geese to wild turkeys.

No wildlife manager worth his salt wants to eradicate raccoons. But raccoons do need to be controlled, not only for their own good but also for the good of their wildlife neighbors. Right now, raccoons are too numerous.

If you're already a coon hunter, great. If not, I encourage you to give coon hunting a try.

The pelts aren't worth much any more, but I can say from experience, a dinner of roasted or barbecued coon is one of the finest to which you'll ever sit down.

And, besides, I've always believed that a hunter who hunts simply for monetary gain isn't much of a hunter at all. Coon hunting offers much more than a monetary return.

I can still remember the last week I hunted coons with Ron. There were many more long chases across the bottoms and ridges, through cane thickets and briar patches, across sloughs and through soggy swamps.

After those long nights, I had scratches, bruises and sore muscles. It was all worth it, though, for those glorious hours spent listening to the hounds.

When the dogs would tear off on a chase, we'd build a fire and wait. "Let's sit and listen," Ron would say. And so we would.

We would sit and stare at the stars or the flames of the fire for hours, saying nothing. Talk was an interruption. We were there with one purpose in mind: to tune our ears to the baying of the hounds as they trailed a raccoon across the river bottoms. And if we killed a coon now and then  well, that was just a bonus.

During those times, sitting by the fire and listening to the chase, I was as happy as a man can be.