Standing ankle deep in the blackwater bayou, I watch the swamp rabbit.

I can hear, in the distance, two beagles hot on his track, but this bottomland creature seems unconcerned.

He hip-hops to the icy water's edge and slides in like a muskrat heading to the Cattail Diner.

I see a strong resemblance between this rabbit and the cottontails I often hunt.

Each sports a powder-puff tail, long ears and big hind legs. Each wears a camo-brown coat peppered with black.

In size, however, this swamp rabbit differs from a cottontail as much as a beagle from a Chihuahua. A big cottontail weighs perhaps 3 pounds; this swamper is pushing 10!

The rabbit swims as fluidly as an otter, with only his nose showing above the water. Then suddenly he dives and disappears. I wait, thinking soon he will surface. This mammal may have webbed feet but he certainly has no gills.

After five minutes, however, the swamp rabbit still has not reappeared. Puzzled, I wade closer to the spot where I last saw him and focus on the scene. Where has the rabbit gone?

The rabbit's scent trail ends at the water's edge, but the beagles are undeterred. They vacuum the loam with noses that could track an ant through the Gobi Desert, determined to find their quarry.

It is Bear who solves the mystery of the disappearing rabbit. He stops beside a brushy top half-submerged at the water's edge, looks at it intently, then yelps as if zapped by a cattle prod.

I can see the rabbit now  his nose, at least. Bear sees it, too. The rabbit has swum into the brush and hidden, or so he thinks. Bear leaps at him from the bank, followed by Reb.

Once again, the chase is on, like two crocodiles swimming after Tarzan. The three animals cross the slough and bail out, the swamp rabbit running like the demons of hell are on his tail.

People who have not hunted swamp rabbits may not appreciate my enthusiasm that day, for there are subtle complexities to the game the uninitiated may not see.

The swamp rabbit, you see, is more than just an overgrown bunny.

A swamper before a dog has more wits than a coyote, more speed than a fox. A swamper doesn't run a tight circle, like a cottontail, but traces huge ellipses, parabolas and figure eights through the bottoms, often taking an hour or more to make a single round through his home territory.

A swamp rabbit may make two circles on the same track, then, for no good reason, head straight for the Mexican border.

To make things even more difficult, swamp rabbits are excellent swimmers. They'll swim downstream, then exit the water in thick cover to throw dogs off the track. They'll dive and hide nose-up under root wads and log jams. A swamp rabbit is truly a fascinating animal. 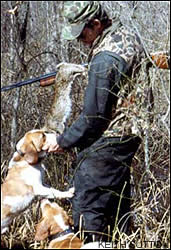 So is a fine swamper dog.

On a good day, a beagle like Reb or Bear will work five times as hard as the best cottontail dog. A swamper hound would rather run rabbits than eat or sleep.

He has a Labrador retriever's affinity for cold water. He'll go till his voice gives out, then he'll go some more, giving out feeble, laryngitic cries every few minutes until the sun goes down or the master calls.

The swamp rabbit, the largest member of the cottontail family, lives where he can keep his feet wet. He can't thrive without abundant water and bottomland vegetation. Transplants to dryer habitats have proven unsuccessful.

Fortunately for me, the river floodplains of Arkansas still have plenty of these elusive rabbits.

But throughout much of its range, the swamp rabbit suffers as streams are funneled into channels, wetlands are drained and bottomland hardwoods are cleared. Here is an animal that can cope with unrelenting natural predators and the seasonal pressure of beagles and hunters. Still, it is no match for the bulldozer.

The swamp rabbit goes by many descriptive nicknames. Throughout his range, he is called "canecutter," because of his fondness for young cane shoots. In other areas he's known as cane jake, swamp hare, water rabbit or, simply, swamper. Some people call swamp rabbits "bucks," because they think they're big buck cottontails.

The smallest mature swamp rabbit is about the size of the largest mature cottontail. The latter usually weighs 2 to 3 pounds, but the swamper tips the scales at 4 to 11.

The successful hunter requires in-depth knowledge of swamper habits. He must interpret his dogs' baying and the course of the rabbit and, when all is right, position himself to intercept the swamper within shooting distance.

Then he must stand motionless, lest the quarry see him and flee for cover, and when the canecutter moves into range  a brown ghost on a brown background covering six feet, sometimes more, with each bound  he must pinpoint his prey, shoulder his gun and shoot.

Consider all these factors and you may see why some hunters are smitten with a passion for swamp rabbits. It's a sport demanding the strategy of a war general, the shooting skill of a woodcock hunter, the intuition of a riverboat gambler, the lungs and legs of a marathon runner, the dog-handling talents of a professional trainer and the patience of Job.

I shoulder my gun and lean against a tree, content to listen to the dogs. The throaty aria of the two beagles rings through the bottomlands like a favorite hymn through a country chapel.

Reaching behind me, touching my game bag, I feel the shapes of two swamp rabbits taken earlier in the day. When younger, I might have stayed until I bagged a limit of eight, then struggled from the woods beneath the weight of all those giant rabbits.

These days, however, two are enough. I can only eat so much fried rabbit and stockpile so many lucky feet. But I never tire of watching and listening as rabbits run and beagles bawl.

If the rabbits also swim, so much the better.