Politicians are trying to fight crime by making it illegal to own various types of firearms. So far, the stumpers haven't tried banning turtles. But it's only a matter of time.

Consider the plight of Tony Brewer in Balch Springs, Texas. Brewer was in a phone booth when two men approached, shoved a snapping turtle in his face and said, "Don't move or you're gonna get bit."

No doubt Mr. Brewer was familiar with the adage, "When a snapper clamps down, it won't let go till it thunders."

He gave the scoundrels $50, and they made their getaway.

A man who was distraught because his girlfriend broke up with him, chased her around with a large snapping turtle. Fortunately, this turtle wasn't loaded. The man caught the woman, but the turtle wouldn't bite.

The lady called police. When officers arrived, they deturtled the guy and arrested him for  no kidding  "assault with a reptile."

When Don Lauver, a wildlife officer with the state Fish and Boat Commission, arrived at a West Goshen Township housing development to investigate a disturbance caused by a "trespassing" snapper, residents told him policemen left the scene when the turtle snapped at one officer and he used his pepper spray on it with no effect.

The assault-minded turtle could have been handed a death sentence.

"It was already peppered and ready for soup," Lauver said. Instead, the wildlife officer transported the turtle to a public lake and released it.

Catch-and-release shouldn't be practiced with snappers, however. Not according to police in Munich, Germany.

When a man showed them a photograph of a large snapping turtle he discovered in Dornach Lake there, the constabulary banned swimming in the lake and issued a warning.

Two weeks passed as police, firemen and fishermen frantically searched for the reptile, fearful, no doubt, it could fall into the hands of ne'er-do-wells.

The monster finally was wrestled ashore by a passer-by and handed over to Munich University's Zoological Institute. "His jaws could have severed a human's arm or leg," said a Munich police spokesman.

Nisi and his fiancée were skinny-dipping in a New York lake when  well, let's use Nisi's own words. "I felt this excruciating pain in my groin, and when I got my bearings, I realized a turtle had bitten my testicles and swam away with them. It's not a nice feeling; I'll tell you that."

Wildlife officers in Roseville, Minn., surely were unaware of this incident when they "saved" an 80-year-old snapper with a golf ball in its throat.

Was the turtle really after golf balls? I doubt it. And what evidence do we have that ball-eating turtles can be rehabilitated anyway?

And what of the two-headed snapping turtle that resided at the Science Museum of Minnesota? Had this snapper been allowed to roam free in public waters, no man could ever feel safe again. Snapping turtles reputedly live more than 100 years.

Such was not the case, however. The double-barreled turtle was turned over to museum officials shortly after it hatched. In a twist of irony, it became part of a popular display called "Nature's Accident," the same nickname some gave to the unfortunate Dayle Nisi.

Did anyone worry that some "gone-postal" man hater could spring the two-headed turtle and release it where it might wreak havoc on the male gender? Apparently not, and we needn't worry that snapper will threaten our manhood; it died July 7 and July 8, 1977.

I must confess that for several years I had in my possession a magnum turtle  an 87-pound alligator snapper that would have severed, well, anything it wanted had it bitten a skinny-dipper.

This was in the 1970s though, long before I was aware that snappers have a propensity for eating one's family jewels, and years before I knew a snapper in the wrong hands can traumatize hapless victims of turtle assaults.

This particular reptile went by the unimaginative name of Turtle. He came to me from a fisherman who caught him on a trotline.

I was a park naturalist, and the man was under the impression that such turtles were endangered and the creature should be turned over to the proper authorities. He gave it to me, nevertheless.

I knew alligator snappers weren't endangered. Eleven had been brought to me that summer alone. And being the naïve soul I was, I released them all in a nearby river. All except the few I turned into bowls of turtle soup.

Turtle was different, though. For one thing, he was much larger than the other turtles. So I decided to keep him.

When a visitor came, my friends and I found it sporting to send the unsuspecting newcomer to the fridge for a brew.

When the door opened, Turtle made an impromptu appearance, raising himself on his forelegs and hissing loudly at the intruder. Needless to say, we didn't make many new friends that way.

Turtle, like other snappers, thrived on a diet of carrion. Leftover Spaghettios. Ripened bologna. Potato skins. Fish heads. Chicken bones. No matter what you put before him, he ate it. He was a living garbage disposal, and loved the job.

"You could make a lot of money off that turtle," a friend told me. "The police use them to find drowning victims. They tie 'em on a line, and the turtle will lead 'em to the decomposing body every time.

"Only problem is, the embalmer has to figure out how to hide the chunks the turtle bites out of the corpse."

I never subjected Turtle to such humiliation. Two years after I acquired him, we had a beer bust down at the river to celebrate his release.

Turtle swam away, and, as far as I know, he's still living somewhere in Arkansas' St. Francis River. If you ever swim there, wear a steel jock strap.

I thought about Turtle while shooting photos recently in a tupelo swamp.

While there, I encountered a dozen common snappers, including one impressive specimen that weighed at least 30 pounds. He was a tyke compared to Turtle, but I couldn't resist setting the self-timer and snapping our portrait together. 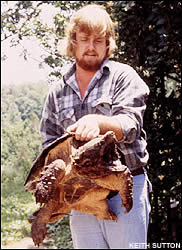 That snapper would have made a darn good soup, but when I held him up by the tail, he had his eyes on my crotch. I figured it was safer not to tote him back to my van.

I haven't told anyone where I found all those snappers. If I did, could any of us feel safe?

What if some depraved individual fenced a snapper for a few bucks to buy drugs? That reptile might find its way to some street gang that could use it in a drive-by snapping at a rival gang. Innocent people could get hurt.

Imagine the horror if some toddler got hold of Dad's assault turtle?

That's not to say I'm advocating the confiscation of all snapping turtles. No, indeed.

Crime is committed by the lawless, not the lawful. Law-abiding citizens should not be deprived of their right to keep and bear turtles.

They can take my snapper from me when they pry my cold, dead hands from around its shell.