LAS VEGAS  Although five cowboys had already clinched world titles heading into Saturday's 10th and final round of the Wrangler National Finals Rodeo, there was no shortage of drama as contestants in three events sweated it out until the very end.

A record crowd of 18,224 watched contestants win world titles in team roping, steer wrestling and barrel racing in the Thomas & Mack Center, the home of the Wrangler NFR since 1985.

Bach, along with partner Chad Masters (Clarksville, Tenn.) won the lucrative average title and a $41,088 payday. While that pushed Bach over the top for his fourth career world title and first since 1995, it left Masters just $848 behind. Masters began the 10-day event 15th in the world standings, but catapulted himself to second place with a top-notch Wrangler NFR.

Meanwhile, Sherwood, who reached his first Wrangler NFR with the help of heeler Walt Woodard, ended an unbelievable week by capping it off with a 4.1-second run on Saturday.

Although ecstatic, both had hoped to win titles with their partners.

"I wouldn't have had this type of success without Walt," Sherwood said. "It's disappointing that it ended up the way it did for Walt. Not taking anything away from Allen, but it's disappointing to start something and not end up winning together."

Added Bach, "Switching partners this year, I knew there was a good chance of ending the year with different champions in heading and heeling. I have mixed emotions. I wish Chad could be here now. He really roped great and showed so much maturity for his age."

Earlier, steer wrestler Dean Gorsuch (Gering, Neb.) clinched his first world title by throwing his final-round steer in 3.6 seconds, giving him the average title and enough money to rally past 2004 World Champion Luke Branquinho on the final night. Gorsuch ended the year with $194,268, about $14,000 more than Branquinho. 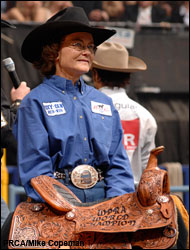 "This means the world to me," Gorsuch said. "Next to the birth of my son, this is the best. My little boy will have a dream one of these days to be a world champion. It's awesome to finally accomplish that dream."

Pozzi finished sixth in Round 10 with a time of 14.14 to win the Wrangler NFR average title, but a fourth-place finish  just .09 seconds away  would have given her the world title.

The rest of the events already had their titleists determined earlier in the week, but many of those same cowboys didn't let up Saturday as they set several event and season records. 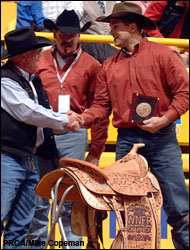 Tie-down roper Cody Ohl (Hico, Texas) won his fifth event gold buckle and sixth overall on Saturday. His 2006 season will go down in history as the best ever in his event as he earned $298,112, including a Wrangler NFR-best $132,652 among tie-down ropers.

The Wrangler NFR, an annual Las Vegas event since 1985, is the world's premier rodeo. Only the Top 15 contestants in each of rodeo's events qualified for the event.