Childress not in a happy mood

It had nothing to do with Dillon's chances to win the Camping World Truck Series championship, trailing James Buescher by 15 points with two races remaining.

It had everything to do with an ESPN.com report that Sprint Cup driver Kevin Harvick has signed a multi-year deal to begin driving for Stewart-Haas Racing in 2014.

"I've got a contract for 2013 and this is 2012," the owner of Richard Childress Racing said of his deal with Harvick. "I'm not talking to you about nothing [regarding that]. Too far out."

It has been 18 years since Childress won the last of his six Cup titles with the late Dale Earnhardt. Harvick was RCR's lone Chase competitor this season and has been the only legitimate title contender for the organization the past two seasons, finishing third each year.

Losing him was the last thing Childress needed.

Harvick's departure will be huge, particularly if he takes primary sponsor Budweiser with him. Remember, RCR lost Chaser Clint Bowyer to Michael Waltrip Racing after last season due to lack of sponsorship and had to shrink from four to three teams. 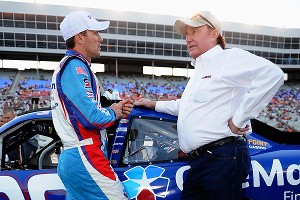 John Harrelson/Getty ImagesKevin Harvick has driven for Richard Childress at the Sprint Cup level since 2001. That relationship appears to be ending.

Some will say Harvick leaving only opens the door for Childress' other grandson, Nationwide Series driver Austin Dillon, to move to Cup in 2014.

But plans already were in place for Dillon to make the move then, either in the fourth car that is vacant or as a replacement for Jeff Burton, whose contract expires after 2013.

And by the way, while Dillon will make his Daytona 500 debut in the No. 33 next year, Childress left open the possibility the No. 3 Earnhardt drove remains a strong possibility for his grandson.

What isn't on the table, according to Marty Smith's report, is Harvick. Smith's sources say the deal has been signed.

Sources close to the situation told me Childress was blindsided by the news, which explains his mood. Replacing Harvick has to now be his No. 1 goal in order to remain relevant in the series.

As good as Dillon has been in the Nationwide Series, he remains an unknown in Cup. Burton appears past his prime and Paul Menard, beyond winning the Brickyard 400 last year, has done little to prove worthy of filling Harvick's shoes.

Convincing a sponsor to add 2004 Cup champion Kurt Busch to the mix may be the best solution. Busch already has a good relationship with Childress, often going to him for advice.

Busch already is driving a Furniture Row Racing car with a Childress engine the rest of this season and in 2013.

No matter what you think of Busch's off the track -- and sometimes on the track -- behavior, he would give RCR a legitimate threat to compete for the championship.

This is a pivotal time in the history of Childress' organization. It recently lost Earnhardt Ganassi Racing as an engine customer to Hendrick Motorsports for 2013. It apparently has lost Harvick to an SHR team that has HMS support.

By 2014, if it hasn't done so already, RCR could go from the second-best Chevy team to third behind HMS and SHR. It could even fall to fourth behind EGR.

So you can see why Childress would be visibly upset.