• Despite a lot of prerace complaints and predictions of doom from the drivers, double-wide restarts were a rousing success in the Indianapolis 500. The action was frantic and only one accident could really be blamed on the new procedure.

• I thought the crowd and the atmosphere were the best at the Indy 500 since 1995, the last year before the open-wheel split. Ten years ago, the 500 had fallen to number three status at IMS behind the Brickyard 400 and the F1 US Grand Prix; now the 500 is back to being the Speedway's unquestioned No. 1 event.

• This is the first Indy 500 in memory that still has people buzzing a week later. J.R. Hildebrand handled his loss with class and it will be interesting to see if a full-time ride develops for 500 winner Dan Wheldon -- or at least something for some of the remaining ovals on the schedule.

• What a heartbreaker for the National Guard to see both Hildebrand and Dale Earnhardt Jr. lose races in the last corner of the last lap on the same day.

• Anyone else out there think that the Indy 500 Victory Banquet is must-see TV? Entertaining for all the wrong reasons. 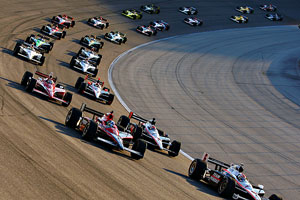 Donald Miralle/Getty ImagesDrivers are usually tense enough over running one race at super-fast Texas Motor Speedway. What will they think about two in one night?

• Gotta say I'm looking forward to this weekend's twin 275-kilometer races at Texas Motor Speedway. But I'm sure the drivers really aren't. The stress of one race a year at TMS is more than enough.

• Would Wheldon rather be in a race car instead of the TV booth at Texas on Saturday night? Would his answer be the same if he was hooked up to a polygraph?

• We've heard for a couple of months that the oval track surface at Twin Ring Motegi was damaged by the Japanese earthquake, so I think INDYCAR's decision to race on the TRM road course Sept. 18 is a good compromise. Meanwhile, Moto GP riders are lobbying to have the Oct. 9 Japanese Grand Prix canceled because they are concerned about radiation levels.

• Who's happiest that the crucial Japanese round of the IndyCar Series championship has been switched from an oval to a road course? Will Power, for sure. The 2011 IndyCar schedule now includes 10 road races and only seven ovals, and Power has dominated the series in road racing for the last year and a half.

• The Motegi event will mark the last appearance for the eight-year old Dallara IC03 chassis in road racing trim. I bet souvenir hunters will find some interesting stuff being scrapped after the Japanese round by teams that don't want to drag it all back home.

• Back at home, construction has finally started on the Dallara factory in Speedway, Indiana, that will assemble the 2012 Indy car. The first cars for testing this fall will be produced in Italy, and Indianapolis 500 winning team Bryan Herta Autosport has landed the contract to handle the initial development of the "Indy car of Tomorrow."