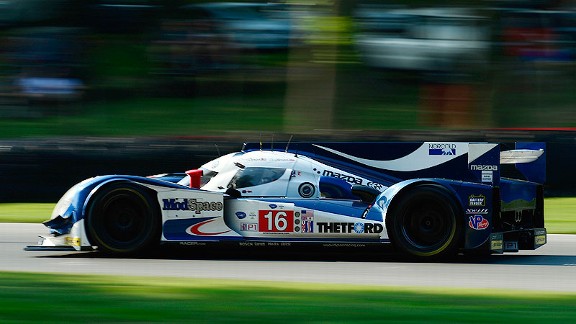 Rick Dole/Getty ImagesGuy Smith got it done when it counted for Dyson Racing on Saturday.

ELKHART LAKE, Wis. -- Sports car fans were treated to perhaps the most thrilling race in the history of the American Le Mans Series Saturday on a picture-perfect day at Road America.

Despite starting next to last on the 35-car grid, Dyson Racing's Chris Dyson and Guy Smith edged the pole-winning Muscle Milk Racing entry of Klaus Graf and Lucas Luhr by 0.083 seconds in the closest finish in ALMS history.

The Dyson team's triumph was even sweeter because last year at Road America, they came out on the opposite end of an almost equally dramatic finish, losing out by 0.112 seconds to Graf and Muscle Milk.

But there was far more to this race than an epic finish. Graf and Luhr overcame a four-lap deficit after their Honda-powered HPD prototype suffered a coolant leak just 38 minutes into the four-hour contest. The pole-winning German duo had appeared unbeatable in the early stages of the race, repeatedly extending their lead by 3-4 seconds a lap to build a cushion of almost a minute before they had to make a lengthy pit stop.

By that stage, the No. 16 Dyson car had charged from the back of the grid up to second place, and it inherited the lead when the Muscle Milk team ran into trouble.

Repeatedly running laps at qualifying pace and taking advantage of full course cautions, the Muscle Milk men put themselves back into contention. When the green flag waved after the final caution with 19 minutes remaining, Luhr carved through the field and passed the No. 20 Dyson car of Eric Lux to move into second place with nine minutes to go.

Luhr quickly eliminated the 8.7-second gap to leader Smith, but struggled with traffic over the last three laps. Luhr made a desperate move on the final corner of the last lap and his HPD briefly nosed ahead of the Dyson Lola/Mazda, but his front end washed out and Smith won the half-mile drag race to the finish line.

"It was too close for comfort," said Smith after his third career ALMS victory. "Last year was really close, and I never expected something to beat that.

"Going into the final corner, Lucas was all over me," the Englishman added. "I thought, 'Do I defend, or do I not?' I thought I had it covered, and to be honest he made a really good move, but I knew the way he got around me I could get back to him if I slingshot around him."

The last eight ALMS races at Road America have featured an average margin of victory of 1.198 seconds, the smallest of any circuit in the series.

"I've won close races, and I've lost close races, but I prefer winning them," remarked triumphant team owner Rob Dyson. "I knew when they were four laps down that there was plenty of time for them to make it back up.

"We had the reverse result last year, and hats off to Guy for battling it out like that and still gaining the win out of it. It was a tight race, but exciting as hell."

However, the GT class was much closer, with Bill Auberlen in a Rahal Letterman Lanigan Racing BMW M3 edging Jorg Bergmeister's Flying Lizard Porsche 911 by 2.631 seconds.

An even closer finish went down in the PC class, as Thomas Kimber-Smith eked out a 0.423-second victory over Colin Braun in identical Oreca prototypes.

But it was the top P1 class and the stunning overall finish that had everyone buzzing.

"At the end, when it went green, I think you just drive it on pure adrenaline," Smith said. "You have to take risks you usually wouldn't take.