CONCORD, N.C. -- Don King needs to give Jack Roush a call. Roush and Ford are ready for a showdown with Toyota.

Put it on pay-per-view. A splendiferous racing extravaganza, as the wild-haired master might say.

It's the woe-is-me Ford local boys against the money-mad Toyota foreigners coming to Nextel Cup.

King would love it. Call it the "Bumpzona in Daytona."

Outside the Lines: Made in America

While Toyota's garage is bustling with nervous energy and excitement for the arrival of the Camry in Nextel Cup, not everyone is thrilled to have the foreign manufacturer on board. Today on Outside the Lines, Made in America, the controversy surrounding Toyota's 2007 Nextel Cup debut.

• Watch the OTL segment
• Outside the Lines index page

Roush is ready to rumble, saying Wednesday he is "going to war" and he plans to "hand Toyota their heads."

Wow. Get a ringside seat while you can. Roush's paranoia with Toyota's move to Nextel Cup gets more acute by the day.

His trademark Panama hat almost started spinning every time a Toyota question was asked during the media tour festivities at Roush Racing.

Roush is convinced NASCAR is headed down the road to ruin because Toyota is the evil empire with endless cash.

"They will try to outspend everyone and place the rest of us in a catch-up scenario," Roush said. "They will upset the established equilibrium."

Last time I checked, this is how things work in a capitalist society. You go after the best people in hopes of producing a better product than your competitor. It's the American way.

But there continues to be this underlying feeling that supporting Toyota in NASCAR is an un-American thing to do.

For the record, Toyota employs nearly 150,000 people in the United States. But it is a Japanese company and one of the world's most successful corporations at a time when American auto manufacturers are suffering.

Maybe if the American automakers built better cars the last 20 years they wouldn't be in the financial turmoil they are today. That's another story. 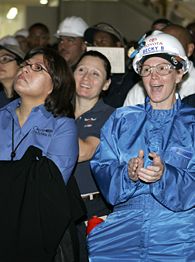 As for the NASCAR situation, GM and Dodge officials haven't followed Ford and Roush with the constant, angry diatribe about Toyota entering Cup.

Rick Hendrick, who has a four-car Chevy team, doesn't see what all the fuss is about.

"I think it's good for the sport to have another manufacturer involved," Hendrick said Wednesday. "I think it's NASCAR's job to maintain the equal playing field.

"But I'm not as worried about Toyota as I am Tony Stewart, Matt Kenseth and that 9 car [Kasey Kahne]. I'll worry about Toyota when the time comes. Right now that doesn't bother me. I think it's a positive."

Stewart drives a Chevy, Kahne's in a Dodge and Kenseth has a Ford for Roush Racing.

Not a Camry in the bunch, but some of the top dogs in NASCAR understand Roush's concerns. Speedway Motorsports Inc. mogul Bruton Smith owns Toyota dealerships and has a firsthand look at Toyota's money machine.

"Toyota is an extremely wealthy company," Smith said Wednesday. "I don't think it's bad, but it's something that is going to change the sport over a period of years. We live in a democracy and that's how it is. If they want to buy their way to a championship, they have the money to do it."

Buying a championship isn't as easy as it sounds. It is estimated Toyota is spending more than $400 million a year in Formula One, but has yet to win a race in five seasons.

But Cup teams point to Toyota's success in the NASCAR Craftsman Truck Series. In its third NCTS season, Toyota placed seven drivers in the top 10 last year and won the championship with Todd Bodine.

That success increased the fears of what Toyota could do in Cup. Toyota officials insist it's just hard work and good hires, but Roush said it's all about the money Toyota spends on its teams.

At one point Wednesday, Roush brought up Wood Brothers Racing and Petty Enterprises, pointing out how two of the oldest teams in NASCAR got it done in the past.

What he didn't say is that teams like Roush Racing and Hendrick Motorsports, multicar operations with hundreds of employees and enormous budgets, have made it impossible for the little guys like Wood Brothers and Petty to compete.

Roush and Hendrick changed the business model, something Roush now is accusing Toyota of doing.

Roush was stumped on one brilliant question by Charlotte Observer reporter David Poole when Poole asked Roush how he would do it today if he was coming into Cup.

Wouldn't he try to hire the best people? Wouldn't he use all his resources to try to be competitive?

Roush gave a convoluted response at first before getting to how he did it in 1988: "I identified people that I thought had the skill sets and judgment to help me make the right decisions in NASCAR racing."

Isn't that what Toyota is doing?