INDIANAPOLIS -- Pole Day for the Indy 500 had some breathtaking final minutes Saturday. Helio Castroneves grabbed the pole, and then watched Tony Kanaan fall just short of topping him on the final qualifying run of the afternoon.

The old Brickyard produced real excitement, but it came in front of mostly empty grandstands. IMS doesn't release attendance figures, but 20,000 is an optimistic estimate.

This wasn't a highly anticipated Saturday in front of a packed grandstand. That was Pole Days of long ago.

A generation of racing fans grew up wanting to see every dramatic moment on the Saturday in mid-May. I know. I was one of them. 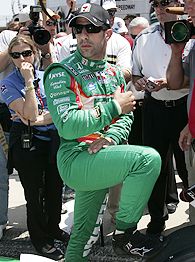 Millions watched from their TVs at home and more than 150,000 people came to Indianapolis Motor Speedway to see which driver turned the fastest four laps.

It was a glorious time for open-wheel racing. That time is gone. This day was special at the end, but the rest of this format needs revamping.

Maybe those of us who look back with nostalgic envy should quit complaining. It is what it is, thanks to more than a decade of two competing open-wheel leagues, among other things.

And this was the best Pole Day action, if not the best crowds, since the open-wheel feud began in 1996 when CART (now Champ Car) and the Indy Racing League went separate ways.

This Pole Day had its suspenseful moments. It just took too long to get there.

Qualifying at most racing events, including Nextel Cup, have few people in the stands. But IMS officials still treat Indy 500 qualifying as if those giant crowds were anxiously waiting to see it.

This was the first time for the new triple-11 format. Eleven drivers qualified on Saturday. Eleven more will qualify Sunday and the final 11 next Saturday.

Then we have the traditional Bump Day to try to earn a spot by bumping the slowest car out of the field.

The two weekends of qualifying over four days isn't new, but the 11-per-day system was introduced in 2005. It provides a bump spot each day. Rain the previous two years kept it from working as planned.

Saturday had clear skies and temperatures in the upper 70s -- as good as it gets for a spring day in Indiana. But it didn't bring in a big crowd.

When the Indy 500 was the toughest ticket in America, having a month of practice and qualifying leading up to the race made sense.

Not enough people care now to drag qualifying out over two weekends. Even one six-hour qualifying session Saturday, which includes practice sessions and dead time in between qualifying runs, is too much.

Most of the action happened in the last 75 minutes. Six hours is twice as long as it takes to run the race. The last hour was a blast as pole contenders battled for the top spot.

The rest was killing time.

Indy qualifying is a driver's average speed over four consecutive laps around the 2.5-mile rectangle. It's unique in all of motor sports.

Maintaining top speeds over four laps isn't easy. Hornish had one bad lap on both his qualifying attempts Saturday, which cost him a front-row spot.

Each driver has three attempts each day to make his four laps. That doesn't include practice laps before making an attempt.

If a larger crowd is the goal, how about two attempts on one day? Make the next day Bump Day, or Pole Day and Bump Day if it rains.

Under this system, Day 2 is qualifying for positions 12 to 22 only. It's tough to generate excitement for filling positions in the middle of the field.

Many people blame the reduced interest in Indy qualifying on the open-wheel split. It's a factor, but not the only one. Indy Pole Day attendance was dropping before the split happened.

The Pole Day crowd in 1996 (the last year everyone raced together) was estimated at 75,000, about half what it was in the mid-1970s. By the mid-1990s, NASCAR already was cutting into the open-wheel fan base.

"This city has changed dramatically," said IRL vice president John Griffin. "People have so many more options for sports. Indy has a Super Bowl champion NFL team and an NBA team. And there are three major racing events here each year now."

Indy has the U.S. Grand Prix Formula One race and the Allstate 400 Nextel Cup event each summer. Those races weren't around when Indy Pole Day was drawing six-figure crowds.

The month of May was it for racing at the Brickyard. Bump Day often brought high drama among the top drivers.

Al Unser Jr. won the race in 1994 for Roger Penske's team, but neither Penske driver qualified in 1995. Top teams sometimes went home. No chance of that now.

And these days, seeing someone set a qualifying record is out of the question.

For years, part of the allure for attending Pole Day was to see how fast the drivers could go.

It was the Star-Trek syndrome -- going where no man had gone before. Fans watched brave soles make history on the storied racetrack.

Speed records are a thing of the past. Racing today is about finding ways to keep teams from going too fast.

A month-long build-up to the race made it special. Now it's monotony.

Griffin said IMS owner Tony George, who founded the IRL and often gets blamed for the split, has good reasons for clinging to old ways.

"Tony gets criticized for changing too many things," Griffin said. "So he's trying to do what people want with some of the traditions of this race."

Most IRL teams would rather race somewhere else in early May to reduce the Indy 500 preparation and expenses. Actually, one weekend would work, but let's not ask for the impossible.

Traditions are slow to change for the Indianapolis 500, which is running for the 91st time on May 27. And Saturday proved that Pole Day still has memorable moments.

But it's time to change the rest of pre-race plan. Holding firm to a format that worked 30 years ago won't bring it back.

Terry Blount covers motorsports for ESPN.com. He can be reached at
terry@blountspeak.com.