On paper, Milka Duno has it all: She's a female racer with a successful résumé in sports car racing and an established relationship with a major sponsor -- not to mention good looks. 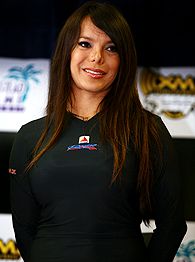 At a time when both sides of the American open-wheel split are struggling for entries, the arrival of an attractive, turnkey package -- like the one Duno is bringing to the IRL IndyCar Series with SAMAX Motorsport and CITGO -- should be a godsend.

It could be trouble in the making.

Why? Let me count the ways.

But first, some background. Duno, a 34-year-old Venezuelan, has a deal in place to run 10 IndyCar Series races in 2007, starting with the Kansas Lottery 300 on April 29. SAMAX, for whom Duno has driven Grand Am Daytona Prototypes since 2005, has hired John Cummiskey (ex-Newman/Haas Racing) to lead the team's IndyCar effort, with engineering by Steve Challis, who is famous for working with the late, great, Greg Moore and Forsythe Racing in Champ Car.

When Duno makes her first IndyCar start, she'll be the third female driver in the field. But the road she took to Indy is dramatically different than the ones traveled by Danica Patrick and Sarah Fisher.

Danica and Sarah started racing karts as kids and worked their way up to IndyCars on opposite sides of the world. Patrick raced Formula Fords in England before graduating to two years of Formula Atlantic back in the states. Fisher did it the old-fashioned American way (or the modern way to NASCAR, depending on how you look at it): oval racing, midgets and sprint cars.

After acquiring no fewer than four masters degrees, Duno made the decision relatively late in life to become a racer. She started out in Barber/Dodge Pro Series open-wheelers in 1999 at age 27, and since then she has concentrated mostly on sports cars.

But if you dig a little deeper into the gaudy sports car record Duno compiled (which includes three Grand-Am Daytona Prototype overall race wins and several LMP 675 class wins in the American Le Mans Series), you'll find that she didn't actually do much of the driving in those victorious runs. She has always been paired with more experienced (and, the record shows, much faster) drivers such as former Champ Car racer and current IndyCar star Dario Franchitti as well as former F1 drivers Stefan Johansson and Olivier Beretta. But credit where it's due: Her finishing record obviously shows she knows how to keep it clean and stay on the track.

That will serve her well in the IndyCar Series, where the action happens exponentially faster than it does in the lumbering Grand Am cars. Duno has competed in, by her own admission, "maybe two" oval races in her career, and those would have come back in 1999 in Barber/Dodge.

In short, not only is Duno starting from scratch in terms of learning oval racing, she's doing it in a car far more potent than anything she has ever driven before, and she's learning the ropes in conjunction with a rookie IndyCar team, no matter how much experience some of the key players may have.

Oddly, her proposed 10-race schedule is built around superspeedways, not the road courses she is more familiar with or the short ovals, which are less dangerous. Maybe SAMAX took a look at Patrick's IndyCar record, which would seem to indicate it's easier to post results on high-speed tracks where success is less dependent on driver input.

Problem is, tracks like Kansas and Texas may be easy to drive in modern high-downforce IndyCars, but they are also the most lethal venues in what many observers consider the most dangerous form of racing in the world. Why would anyone want to start out there?

In fact, why is Duno not being required to run a few Indy Pro Series races, to get her feel back for open-wheelers and learn a little bit about oval track racecraft?

"By the time she enters her first event and races, she'll have thousands of miles [of testing] under her belt," said Indy Racing League president of operations Brian Barnhart. "We'll do plenty of testing on track with her including start and restart practice and pit stop practice. We'll even consider putting other cars out there with her to replicate traffic and give her an opportunity to get accustomed to running in dirty air."

SAMAX principal Peter Baron, a former racer, believes doing the IPS would be a waste of time and resources for Duno.

"Oh, sure, it's a big challenge, but my dream is coming true. I was dreaming about the Indy 500 for many years, and now I can't believe that I am following this big chance I have in my life."
-- Milka Duno

"We felt the experience [IPS drivers] had is probably pretty equivalent to what she already has in the Daytona Prototypes," Baron commented. "If you're going to go drive an IndyCar and that's what you want to do, figure out how to get it done. If we were to go in the IPS, that might be a little bit of a sideline."

Unspoken is the need to get Duno up to speed so that she can be among the 33 drivers in the Indianapolis 500 field. Her SAMAX Grand Am co-driver Patrick Carpentier is set to coach her during testing -- and undoubtedly will serve as "Plan B" if Duno's efforts fall short of the mark.

"Oh, sure, it's a big challenge, but my dream is coming true," she said. "I was dreaming about the Indy 500 for many years, and now I can't believe that I am following this big chance I have in my life.

"I'm very ambitious. I want to be in front immediately, but I know that's not the reality because I need to learn everything. But I can be patient."

If Indy Racing League management will be watching Duno closely as she takes her rookie test, you can bet that IndyCar Series competitors will be keeping a close eye as well -- albeit not because they think she'll be a threat to win races.

"From what I've seen, she can't drive a nail," observed one leading IndyCar team owner.

Female racers always want gender taken out of the equation, so I'll oblige by saying my fears about Duno joining the IndyCar Series have nothing to do with her being a woman.

No, I think the driver she shares the most similarity with is Paul Dana, who was killed a year ago at Homestead-Miami Speedway while practicing for what would have been his fourth IndyCar Series race.

Like Dana, Duno is highly educated and articulate; they both started racing late in life as adults, well after their peers, and they both cultivated lucrative sponsorships, each coincidentally energy related.

Given her level of experience, putting Duno behind the wheel of an IndyCar is a dangerous proposition.