DAYTONA BEACH, Fla. -- Kevin Harvick survived 48 laps of a demolition derby at the end of the Daytona 500. He also ruined the fairy tale ending.

"This had to be the wildest Daytona 500 I've ever watched. I kept my eyes shut for a while there."
-- Richard Childress

Harvick stopped it by a blink -- two one-hundredths of a second to be exact.

It was the closest finish since electronic scoring started. Nothing against the first-time Daytona 500 winner, but almost everyone watching this race wanted to see one of NASCAR's favorite sons finally get the dream moment he deserved.

Mark Martin, a four-time runner-up to the Nextel Cup crown, was moments away from the biggest victory of his life, hoping to finally win NASCAR's premiere event in his 23rd try.

Harvick had other plans. He made a dramatic drive to the front in one of the wildest, most destructive finishes in the 49-year history of the event.

"I knew I was going to be the bad guy at the end with Mark leading," Harvick said. "But we kept the pedal down and hoped for the best."

In a green-white-checkered overtime finish, Harvick went outside in Turn 3 on the final lap and got side-by-side with Martin as they headed for the start-finish line.

Behind them, the wreck-fest was on. Several cars crashed behind them as they zoomed to the line together.

It was an explosion of bashing metal as a three-wide pack of cars got together. Clint Bowyer's car turned over on its roof, flipped back on its tires and burst into flames in the infield grass.

Had it not been the last lap, NASCAR surely would have thrown a caution flag immediately, which would have frozen the field at that moment. Martin felt he would have won had NASCAR turned on the yellow light. 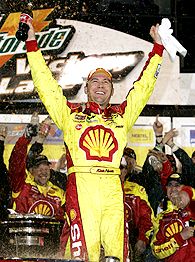 So a week of penalty controversy at Daytona ended with a controversial ruling. NASCAR didn't throw the yellow flag, allowing the two leaders to stay on the gas until the finish line.

NASCAR officials obviously wanted the leaders to decide it at the line. The wreck was behind them, so they let them race back to the green.

Or did they? NASCAR spokesman Ramsey Poston gave this official statement 90 minutes after the race ended:

"When the 07 [Bowyer's car] got sideways on track, the yellow came out at that time," Poston said. "The 29 [Harvick] was ahead of the 01 [Martin] at that time and declared the winner taking the checkered flag."

Huh? Officials later clarified that the race finished under green, but the caution light came out at almost the same time. Harvick insisted he didn't see the yellow light until after he crossed the line.

The final-lap car crunch was the last of four major accidents in the final 48 laps.

"The demons came out when it got dark," Harvick said. "The entire complexion of the race changed because everyone's car handled better. We were three-wide, beating and banging. It was survival of the fittest."

Harvick becomes the second Richard Childress Racing driver to win the Daytona 500. The man he replaced was the first. Dale Earnhardt won it in his 20th try in 1998.

Three years later, Earnhardt was killed in a crash on the final lap at Daytona. Harvick moved up from the Busch Series to replace Earnhardt in the next event. Sunday was the six-year anniversary of Earnhardt's death.

Childress has seen it all at Daytona, but Sunday was a new experience for him.

"This had to be the wildest Daytona 500 I've ever watched," Childress said. "I kept my eyes shut for a while there." 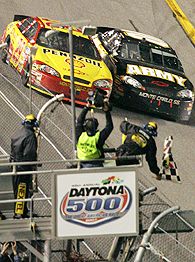 The first 150 laps Sunday won't be remembered for dripping drama. Most of the race was run single file with Tony Stewart or Kurt Busch in front.

Stewart made a masterful charge to the front. He fell to 40th on Lap 84 after pit road problems, but worked his way back to lead two laps before the accident.

Stewart and Busch were the two best cars in the field until they took each other out with 48 laps to go. Stewart was leading and Busch was second when they touched in Turn 4 and slammed into the wall.

The Stewart-Busch crash was an omen of things to come for some of the biggest names in Cup. Jimmie Johnson crashed on the backstretch with 27 laps to go. Dale Earnhardt Jr. couldn't avoid a backstretch mess of banging sheet metal with five laps left.

That brought a red flag and led to the overtime finish. Harvick was sixth on the restart, but zoomed forward with help from teammate Jeff Burton and Roush Fenway Racing driver Matt Kenseth.

"We had such a run back there that I was coming like a freight train," Harvick said. "We were up against the wall and it was take what we could take. There was no holding back at that point."

That meant joy for Harvick, disaster for those who couldn't avoid the carnage, and disappointment for the sentimental favorite.