BRISTOL, Tenn. -- Kyle Busch didn't like it, but the debut of the Car of Tomorrow looked a lot like the same old racing of today. 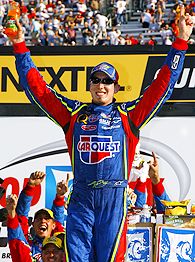 Busch earned the honor as the first winner in the new car, holding off Jeff Burton in a side-by-side overtime finish in the Food City 500.

If the 160,000 fans in the deafening Bristol Motor Speedway bowl were expecting a plethora of unusual happenings, they left disappointed.

The biggest surprise of the day was the drivers minding their manners for the most part, including the green-white-checkered finish.

Burton could have given Busch the usual Bristol bump-and-run in the two-lap shootout, but he elected to play fair.

"I wanted to win badly, but bumping him out of the way isn't winning in my opinion," Burton said. "I have a lot of respect for Kyle. He's always raced me clean, and I returned that. Half the grandstands will say it was wrong and half will say it's right, but that's how I chose to do it."

Busch earned the third consecutive win for Hendrick Motorsports, with Jimmie Johnson winning the previous two races. It was the 200th victory for a Rick Hendrick-owned car and the 600th for Chevrolet.

But the COT version of the new Chevy Impala is one Busch can do without. Busch went to Victory Lane and said he hates the COT, adding, "They suck."

OK. Be sure to inscribe that on Busch's winning trophy.

The cars are different, everyone agrees, but most of the racing didn't change.

"It was real similar to a normal Bristol race," Burton said. "I didn't think it was any different than the race we had last year."

Sunday's race had 15 cautions but few major incidents. Some drivers raced tentatively, but we still had a couple of the typical angry moments.

Matt Kenseth bumped Dale Jarrett from behind and caused Jarrett to slam into the wall. Jarrett climbed out of the car, walked up the apron and raised his arms at Kenseth as he went by.

"It's not the first time he's done something like this," Jarrett said of Kenseth. "Everybody has this great vision of Kenseth as a nice guy, but he's a rough driver on the racetrack."

Kenseth did the same thing last year to Jeff Gordon, but the bumping was an exception Sunday. Drivers seemed to fear damaging the new car before they really know how to race it.

Nevertheless, the drivers you usually see leading the pack still were up front. Tony Stewart had the best car, just as he did in the old model at Daytona.

Stewart dominated the first half of the race Sunday, leading 257 of the first 289 laps. But a fuel-pump problem caused him to pit while his crew made repairs, a mechanical malfunction that had nothing to do to the COT.

"He was class of the field," Busch said of Stewart. "We had nothing for him, but once he had the problem, we knew we had a chance."

Pole-winner Gordon didn't think he had a chance early in the race when his No. 24 Chevy handled like his grandmother's washing machine.

He fell to 25th after 175 laps, but his crew continued to make adjustments and figure out what the new car needed to race fast.

"What a fight this was for us, and a great fight," said Gordon, who finished third. "Considering where we were early and where we finished, I have to feel good about it."

Few winning drivers have felt worse than Busch, who spent most of his postrace interview in the media center complaining about how much he dislikes the COT.

Gordon agrees, but Busch is missing the point. The Car of Tomorrow wasn't built to make driving easier. Along with safety improvements, it was built to try to even the playing field and make the racing closer.

"It's not comfortable to drive like the old car," Gordon said. "We're taking a step backwards in a lot of ways. But if it makes for better racing, I'm all for it."

We didn't find out the answer to that Sunday. It was short-track racing at Bristol like we've seen so many times in the past on the half-mile oval.

The new car isn't the old one, not by a long shot. But put it on the track with talented drivers behind the wheel and it's still just racing.

That's a fact, even if the winner hates it.