NASCAR's next infusion of talent, it appears, is coming from the world of two-wheel racing.

Ricky Carmichael was the first to make the move from supercross/motocross motorcycle racing, a sport he dominated, and now Jeremy McGrath, another legendary motorcycle racer, has made the switch. 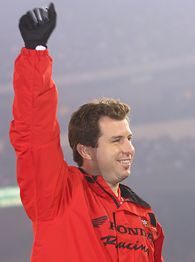 Perhaps it won't be long before James "Bubba" Stewart, the latest star on two wheels, will make the move.

"I think it's great for the sport," said Gibbs Racing president J.D. Gibbs, who said motocross is his second love behind football. "They are great athletes, and they have great hand-eye coordination. They're competitive, and they're really focused. They've got as good a chance as anybody to be successful [in stock cars]."

Carmichael is in his first season with Ginn Racing and gradually is being eased into four-wheel racing by competing in late models. That is the route McGrath is taking with JR Motorsports, with which he signed last week.

It is not an easy transition at all, but they believe they can succeed.

"I think I've learned a lot through my motocross career and supercross career to have patience," said Carmichael, who is being mentored by Nextel Cup veteran Mark Martin. "I know it's going to take awhile to get where we want to be and to get to our goal, and we have to do what we have to do.

"I think that I'm going to have a [target] on my back or the car, there's no doubt about it. But it seems that it's been that way for my whole career in motorcycle racing, so I'll be used to it; it won't bother me. I'm not out there to ruffle any feathers. I'm more interested in taking care of what I have to do and progressing and trying to make this whole deal happen."

McGrath is 35 and retired from motorcycle racing in 2003.

He believes it's simply a natural progression for motorcycle racers to move to stock cars. Although it might seem like a late-in-life career change, McGrath is banking on adjusting quickly.

"Supercross is one of the most aggressive sports in the world," McGrath said. "We have great hand-eye coordination, and we know how to compete. I really think this has been a talent pool that has been overlooked."

He is extremely confident in his ability, and he was able to impress Dale Earnhardt Jr. during a recent test. McGrath was fast from the get-go, and Earnhardt signed him on the spot to a driver-development contract.

"I like his approach, his mentality and the energy he brings to this shop," Earnhardt said. "I know this isn't just some fleeting interest on his part. He is as serious about this as anyone I've ever been around."

Like Carmichael, McGrath will compete in 10 late-model races, with the first scheduled to be Saturday at Southern National Raceway Park in Kenly, N.C.

"This is a big transition, but it's always been in my mind," McGrath said. "When I wasn't competing, I was racing go-karts, so I do have some seat time."

Gibbs -- whose brother, Coy, is starting a motocross team for 2008 -- said attracting riders like Carmichael and McGrath to Cup racing is nothing but a positive.

"I think it's great for the sport," Gibbs said. "It will allow NASCAR to attract fans from a different demographic."

The development process involving Carmichael and McGrath will be slow by intention.

"Not everyone that follows stock car racing realizes the kind of impact that Ricky Carmichael has had in his career and is a huge force in motorsports," Martin said. "This is the first step in converting from two wheels to four. And we're going to take it easy and not try to get in too deep here [early in the race development]."

Both motorcycle standouts believe their already-established racing instincts will make their transitions much smoother. It also doesn't hurt that they are in top physical condition, but they also are more than aware they are learning something almost completely foreign to them.

"The biggest thing for me has been just that I'm learning something every time I get in the car as opposed to a motorcycle," Carmichael said. "I've done it for so long, 22 years, that it was like putting on my shoes. For me, it takes a lot more mental concentration in the car than a motorcycle.

"But the thing that is easier for me in a car is the physical aspect of it. It's much easier. I'm not out of breath. So that's one good thing that I can turn over. And another thing is, you're always racing -- that's going to be the same no matter whether it's a motorcycle or a car. It's just learning what the car does and what the motorcycle does. The racing is always the same no matter what form of racing."

McGrath said he doesn't want to look too far ahead, but he is confident enough to believe that by next year he will be in a "bigger" car. He is not rushing himself, but this is a new career for him at 35, and he wants to make the most of it.

Meanwhile, could Stewart's arrival in Nextel Cup racing be far away?

Stewart is only 21, and he has said repeatedly that his current focus is squarely on motorcycle racing. That doesn't mean he hasn't been approached by representatives from the stock car world.

"We've talked to him on and off for a while," Gibbs said. "But right now, he's focused on what he's doing now."

Angelique S. Chengelis is a contributor to ESPN's NASCAR coverage.