He is moving on, and so is Dale Earnhardt Inc. 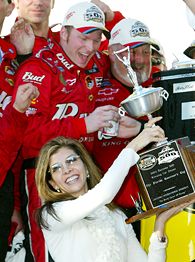 Earnhardt will finish the season with the team driving the familiar No. 8, and DEI and its 400 or so employees are soldiering on, but they already are working on life without Junior, clearly a huge piece of the puzzle but not one they believe is irreplaceable.

Morale is solid at DEI, the company Dale Earnhardt and his wife, Teresa, formed in February 1980. Some there believe that once the smoke clears, once things get settled, a more powerful company very well could emerge.

After all, this is a company that remained strong after Earnhardt's death at the 2001 Daytona 500.

"It's good, it's good," said Steve Hmiel, technical director at DEI, when asked about the morale at DEI since Dale Jr. made his announcement. "It's frustrating because ... I have to be careful, because I'm going to say something wrong.

"It's a shock that Dale Jr. would walk away. That's his decision. But there's a company there that lives and breathes and takes care of people and pays people every other Friday, and that has never changed even through our darkest hour."

In the days after Earnhardt's announcement of his departure, Richie Gilmore, director of competition at DEI, said the mood among employees was rather downcast.

But after a few days of wondering how things could possibly last without Earnhardt, things changed.

"I think that it's been a big test for the character of the employees at DEI, and I feel everybody has stepped up to the challenge, everybody is ready for the challenge," Gilmore said. "I can't be more proud of our employees. They are all behind Dale Earnhardt Inc.

"They all have something to prove. They all feel that we do have good equipment and our stuff has maybe been run down too much in the press. We have two cars pretty much every week running in the top 10. A lot of companies would trade for that. We have a lot to prove and a lot to improve, and every day that you don't try to improve, you're backing up, and that's what we try to do every day is get better."

I can't be more proud of our employees. They are all behind Dale Earnhardt Inc.

Earnhardt-Childress Racing Technologies will build a 300,000-square-foot facility, and the company hopes to have the first joint engine ready for competition by the July race at Daytona International Speedway.

And with Paul Menard and Martin Truex Jr. still committed as drivers with DEI, the company seems a far cry from what some have deemed as one that ultimately will collapse and fold without Earnhardt.

"It makes you feel bad that somebody would think another company could do a better job for Dale Jr. than we could, and if Dale Jr. believes that, that's cool, but we're still a racing company," Hmiel said. "Teresa is here to support us, and we'll support Teresa.

"I've raced since 1967, and we're not stupid, and we haven't forgotten how to race. We've lived a long time doing things on our own, and we will continue to do so. Our job is to make it a viable company, a place that drivers want to drive for and a place mechanics want to work at. And that's what we'll do. It's frustrating when people make that statement, 'Well, we know that whole thing was about Dale Earnhardt Jr.' We love Dale Earnhardt Jr., and we wish he had never gone away, but it's not all about Dale Earnhardt Jr."

If there is a chip on their collective shoulders at DEI, so be it. As Gilmore said, the attitude there now is about proving themselves in the post-Junior era.

And that already has begun.

"Dale Earnhardt Inc. has always been a company with strong people and a lot of will, and I think that's what people will see," Gilmore said.

Angelique S. Chengelis is a contributor to ESPN's NASCAR coverage.