BRISTOL, Tenn. -- Jeremy Mayfield was waiting for the final few cars to complete qualifying on Friday when his hauler driver, Jeff Miles, interrupted. 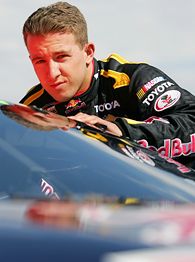 "Can you run me to Wal-Mart?" he asked. "I didn't bring enough underwear for the weekend."

He almost packed for one day on purpose in hopes of changing his luck after, like Mayfield, failing to make the field for the first four Nextel Cup races.

"Instead of planning on being here all three days, plan on one and that's when you make it," he said.

The only change of clothes Mayfield and Allmendinger will need for the rest of the weekend at Bristol Motor Speedway is a driver's suit.

Mayfield qualified 23rd for the inaugural Car of Tomorrow race, making the 43-car field for the first time since last year's finale at Homestead-Miami Speedway.

Allmendinger made a Cup field for the first time ever, qualifying 43rd despite a slight brush -- or two -- with the wall during the first lap of his two-lap run.

Their efforts gave Toyota five cars in the race, which is one more than the Japan-based manufacturer had in the first four events. All five also made it on speed, unlike the past weeks when Dale Jarrett used a past champion's provisional.

"So for the teams to go from where they tested four weeks ago at this track to put five of the cars in, and set a new mark for putting cars in the race, all of them qualifying on time, it's a step in the right direction," said an excited Lee White, the general manager of Toyota Racing Development.

But nobody was more excited than Mayfield and Allmendinger. Both were so happy they almost didn't know how to react to being at the track for a Saturday practice.

"It's pretty weird," Mayfield said. "I hope my car is still here."

It was. And his hauler was in the garage instead of with Allmendinger's far outside the confines of this half-mile track because there wasn't enough space to park all 49 teams that attempted to make Sunday's race.

"I think mine was in Johnson City," said Mayfield, jokingly referring to the town 18 miles away.

For the past month and a half, Mayfield and Allmendinger felt like they'd been banished to Siberia. They would come to the track on Fridays and be on their way home by Friday night.

"I didn't think I'd ever be this happy to be in a race," Allmendinger said. "Usually you're this happy when you win a race. Jeremy and I saw each other when we walked by [after qualifying]. We shook hands and both had this look of, 'Thank God! We don't have to answer that stupid question anymore about when are you going to get in a race.' "

Mayfield was so elated after qualifying that he asked for a trophy.

"I feel like I've been a small part of this sport for a long time. Then I felt like it was all gone. You feel like you're not a part of it. It's not a good feeling."
-- Jeremy Mayfield

The festive mood around both haulers on Friday carried over to Saturday. Allmendinger was chased around by a member of his crew when he arrived around 9:45 a.m.

"He's trying to mess up my hair again," said Allmendinger, running his hand over the gel in his hair. "He did it yesterday, too."

Mayfield seemingly had a permanent smile plastered to his face.

"The last four weeks have been worse than last year put together," he said.

Last year wasn't easy on Mayfield. He was released in August by owner Ray Evernham after a tumultuous season in which he fell out of the top 35 in points after making the 10-driver championship chase the first two seasons.

That led to a legal suit that was aired in the media.

"We needed this for sure," said Mayfield, who signed with Bill Davis Racing shortly after his release from Evernham Motorsports. "We had hit rock bottom. It don't get any lower. We sucked it pretty much.

"I never thought I'd say this, but to make our first race [here] is pretty cool."

Allmendinger hadn't sunk quite so low. He expected this season to be challenging with a new team and manufacturer in Toyota's Team Red Bull. He knew there would be a learning curve for him having taken the fast lane from Champ Car to Cup.

As gut-wrenching as it was for him to miss the first four races, his team remained positive and told him it wasn't a big deal.

"That was good to see," said Allmendinger, who finished third in the 2006 Champ Car World Series with five wins. "If those guys would have gotten down and I felt like they didn't believe in me it would probably have killed me.

"It was difficult. I've never had to worry about getting in a race."

The only thing worse for both drivers than leaving the track early was watching the race on Sundays. Mayfield spent as much time as possible working on his tractor and Sprint cars at his Catawba, N.C., farm.

"I feel like I've been a small part of this sport for a long time," he said. "Then I felt like it was all gone. You feel like you're not a part of it. It's not a good feeling."

Allmendinger did everything he could to escape the race, but everywhere he turned it was there.

"For the most part I do watch the races. It sucks. I hate watching races. I used to love it."

Mayfield and Allmendinger both feel they should have been in the field before this weekend. Mayfield had a fast car at Las Vegas, but never got a chance to show it in qualifying because of a loose spark-plug wire.

Allmendinger got only six practice laps in before qualifying at California because the inspection process was backed up and blew an engine last week at Atlanta leaving pit road for qualifying.

"You go, 'When is it going to change? When is something going to go my way?' " Allmendinger said.

Things started to go Allmendinger's way when he brushed the wall during his first qualifying lap and didn't crash.

"It was like magic to my ear when I heard [crew chief] Ricky Viers screaming at me, 'Save the car, we're in the race,' " Allmendinger said. "I spent four weeks doing my first lap hoping to hear that."

"I don't know how many more we could have missed before we went crazy," he said.

Now all he has to worry about is finding more underwear for Miles.

"That won't be a problem," team owner Bill Davis said. "We'll just turn what he has inside out."