BRISTOL, Tenn. -- Gary Nelson leaned against a stack of tires on Sunday at Bristol Motor Speedway as crew members for Dale Jarrett and David Gilliland worked feverishly to repair their heavily damaged cars.

He watched with great interest as Jarrett's crew reattached the rear wing that remained intact despite a vicious smack into the wall on Lap 42.

He surveyed the way the roll cage held up on the right side of the No. 44 Toyota after it was T-boned by Gilliland.

He then walked over and looked at the front-end splitter of Gilliland's car that crumpled -- but didn't shatter as some predicted.

"We'll have to take a closer look, but it appeared everything did what it was supposed to do," Nelson said.

Nelson once headed the team that designed the Car of Tomorrow, which made its debut Sunday. That project started seven years ago at NASCAR's Research and Development Center.

Although he resigned a little more than a year ago to start his own company that specializes in the safety aspects of motorsports, he remains a consultant on the COT.

As pleased as he was to see the controversial wing and splitter hold up under an extremely hard hit, he was more pleased to see Jarrett out on the track yelling at Matt Kenseth for starting the crash.

"Everybody has this great vision that Matt Kenseth is this nice guy on the racetrack," Jarrett said. "He is a nice guy away from the track, but he's a rough driver on the racetrack when he doesn't have to be. We'll have a discussion."

It wasn't that long ago, Nelson said, that a driver wouldn't have had the wherewithal to respond so quickly after such a hit.

"Somebody would have to tell them what happened," he said. "For a driver to keep his wits throughout the wreck, that both of these drivers were able to think through the whole thing, that makes this a success."

Safety was the main motivation behind the COT.

So from that perspective, it passed the first test.

Matt Borland, Jarrett's crew chief, never had seen a car come apart quite like this. And though the car wasn't safe enough to return to the track, he said it did its job.

"The car was good," he said. "It's fun racing, but it's not fun when somebody does something like that. It's not the first time, but it will be the last.

"But the car is very good and obviously does its job."

So did the parts.

Nelson said the damage to the wing would have been no different if Jarrett had had the traditional spoiler.

He'll be interested to see whether the damage to the right side of Jarrett's car is any less severe because of the new frame and foam design.

"You don't know until you analyze the data," Nelson said. "The car provides the driver with a lower G-strike. A lower G-strike is always better for the occupant. 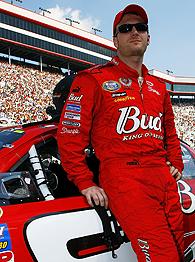 "We'll look at the data and compare it to data we've had from another wreck similar to that and see what the G-strike is."

But there were concerns. Drivers complained that passing was tougher than ever, although second-place finisher Jeff Burton and third-place Jeff Gordon said there was a second passing lane not normally found at this half-mile track.

Kyle Busch, who held off Burton for the win on a green-white-checkered finish, was the most critical.

Dale Earnhardt Jr., whose team admittedly was "terrible" in testing and practice, agreed the car was hard to handle. But he was smiling after a seventh-place finish and actually said it was a fun experience.

"Car of Tomorrow, man!" he said as he walked away from the track. "It wasn't a disaster like everybody anticipated. It worked out, I reckon. Racing was about the same."

In some ways, it was better. Because the front end is flatter than what drivers are used to, it was easier to bump somebody from behind without spinning them out.

"It was real funny," Earnhardt said. "When you hit them, it just throws them forward. It was kind of cool. I would have gotten spun out in that other car.

"I could lean on people real good. You could bounce off the wall. I think it's a good car."

Others were concerned they bent the frame, which means the car has to go back to NASCAR's R&D Center for recertification before it can be used again.

"I've got to get home and check this stuff out," said Robbie Loomis, the director of race operations at Petty Enterprises. "The car is lighter. It flexes a lot more."

Robin Pemberton, NASCAR's vice president for competition, was pleased with the initial run. He said there were more teams in the top 15 to 20 that don't normally run there, although most of the top 10 were the usual suspects.

He wasn't concerned with the splitter cutting tires, saying there were no more cut tires than at a normal Bristol race.

He didn't make a big deal out of Busch's comment, saying everybody is entitled to an opinion.

"We had a couple of hard impacts," Pemberton said. "The car did what it was supposed to do, absorb energy."

Perhaps that's why Nelson was in such a good mood.

"Everybody was safe," he said. "That was the goal."