As we await the end of the world, which could come as early as Sunday evening with Jeff Gordon riding into Victory Lane at Talladega on the late Dale Earnhardt's birthday, it's a good time to assess just exactly who Gordon is and who he isn't in the world of NASCAR. 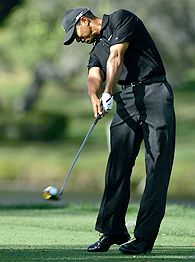 Or maybe it's a topic that just takes up space, but we've got loads of it here in the Cyber World, so as Gordon seeks Win No. 77, let's get to it.

He's not the Barry Bonds of NASCAR. A record breaker, yes, but there never have been any allegations that steroid use is responsible for Gordon's right foot hitting the accelerator faster than his rival drivers.

But he could be the Alex Rodriguez of NASCAR. A-Rod has hit 14 home runs this season, a figure that is subject to change between now and when I arrive at the bottom of the column. He is going to sail past the hallowed 500-home run mark in a season in which he turns all of 32.

In other words, A-Rod is an otherworldly talent and, until this ridiculously torrid April stretch, was unloved even in his home park.

Gordon, who will soon replace Earnhardt as the sixth most successful driver and by next year could surpass Darrell Waltrip as the driver with the most wins in the modern era, gets booed at every track he visits.

A too carefully polished public image has something to do with it.

We know that he isn't the Kobe Bryant of NASCAR. Gordon does not possess athletic gifts that are superior to those of his fellow drivers. And other than a fairly public divorce, Gordon does not bring a hint of scandal to NASCAR.

We know that he isn't the Peyton Manning of NASCAR. Manning has always been viewed as a quarterback who could do everything but win, both in his four years at Tennessee and in his first eight seasons with the Indianapolis Colts before his breakthrough in February.

By the time Gordon had been a full-time driver for eight years at Hendrick Motorsports, he had 52 victories and four Cup championships.

And yet he might be the Tom Brady of NASCAR. Both win all the time. Brady dates supermodels.

Gordon is married to one.

Ultimately, though, the best comparison isn't Rodriguez, Nash or Brady.

Stick with me here (heck, you've made it this far). Jeff Gordon is the Tiger Woods of NASCAR.

How do we know this?

In his 11th year, Woods has 56 victories. About five a year.

In his 15th year, Gordon has 76 victories. About five a year.

Woods was not greeted entirely with enthusiasm when he began to dominate golf. That has been true of Gordon his entire career.

When Woods fails to win a major championship, even if he wins three or four tournaments, he is said to be in a slump.

Gordon hasn't won a Cup championship in five years and those who cover the sport have ranked other drivers ahead of him as a result.

Yet since his last title, Gordon has won 18 races. Three of the drivers who won Cup titles have won fewer races in the same time frame -- Tony Stewart (17), Kurt Busch (15) and Matt Kenseth (14).

Only Jimmie Johnson, Gordon's teammate who has to benefit in many ways from his association with Gordon and Hendrick, has more wins (26).

And Woods' success has clearly elevated golf's ratings and brought new fans to the sport.

Woods will finish his spectacular career as the greatest golfer of all time.

Gordon almost certainly will be viewed as No. 2. But then Woods isn't trying to chase down a King.

Tim Cowlishaw is a columnist for the Dallas Morning News and a contributor to ESPN's NASCAR coverage.