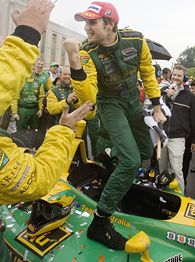 After the Champ Car teams roll out of Elkhart Lake, Wis., on Sunday night, they'll head back to base to prepare for a two-week trip to Europe for races at Zolder, Belgium (Aug. 26) and Assen, Netherlands (Sept. 2). Then the series looks set to totally drop out of the public consciousness, thanks to a seven-week gap in the schedule prior to an Oct. 21 event that's literally on the other side of the world in Surfers Paradise, Australia.

Three weeks after that, Champ Car races in Mexico City, and another three weeks will pass before the drawn-out championship draws to a close in Phoenix.

On top of all that, Champ Car continues to perpetrate the myth that the series will actually race in China -- maybe even this year. Officials say the oft-postponed Chinese round could happen Thanksgiving weekend, which doesn't sound realistic with Phoenix theoretically on the card a week later. And that's assuming that the trivial matter of the FIA refusing to grant Champ Car an approved date for the Chinese race can be overcome.

Fortunately, the Champ Car drivers and the fans who show up at Road America this weekend don't have to worry about the series' broader, pressing issues. They can focus on and enjoy America's fastest and most challenging natural road course on what's expected to be glorious summer weekend.

There is the added bonus for the fans of a four-hour, twilight American Le Mans Series sports-car race set to be flagged off late Saturday afternoon. The ALMS has provided a boost to open-wheel racing on both sides of the split this year, serving as co-headliner for both Champ Car and the Indy Racing League.

Thanks to massive corporate support from Honda, the IRL/ALMS twin-bill a couple of weeks ago at Mid-Ohio Sports Car Course was the road racing event of the Summer, and only a surprisingly large fan turnout this weekend will allow Elkhart Lake to steal away those honors.

It's unfortunate that even before it leaves the country for more than three months, Champ Car is struggling for media attention in the United States. The series, after all, is in the midst of its best championship battle in years.

Not surprisingly, Sebastien Bourdais tops the points standings as he attempts to wrap up his Champ Car career with a record fourth-consecutive title. But Robert Doornbos of the rebranded and rejuvenated Minardi Team USA has given Bourdais all he can handle and is just 10 points back. Team Australia has also emerged as one of Champ Car's top teams in the first year of the Panoz spec-car era, and, like Doornbos, Will Power has claimed two race wins this year and ranks a close third in the standings.

For all of his achievements in America over the last four-plus seasons, Bourdais has never won at Road America -- his favorite track in the states. He has always been fast on the wide-open 4.048-mile road course and has visited the podium three times, but never on the top step.

If the talk that Sebastien has already signed for the Scuderia Toro Rosso Formula One team is true, then this will be his last chance.

"It's an awesome feeling to do a qualifying lap right in Elkhart Lake," stated the 28-year-old Frenchman. "It's really, really enjoyable. It's pretty hard to put together the perfect lap, but when you feel confidence in the car and you feel good, it flows from one corner to another and before you even know it, the lap is over."

"We've had some pretty good showings at Road America but unfortunately for some reason we haven't been able to put it to together and win," Bourdais said. "It has been a little frustrating from time to time, especially last year when we seemed to be running away with it and every time there would be a yellow [flag], A.J. came out on top.

"But that's what racing is all about -- sometimes it just doesn't go your way."

Doornbos has never raced at Elkhart Lake, though he and most of the Champ Car field tested there in June. He admits he has been looking forward to this race all year.

Road America is a high-speed track, more what I'm used to in Europe. You sort of have to shift your mind-set, just as you'd change the setup on your car after racing on a street course.

"Road America is a high-speed track, more what I'm used to in Europe," said the Dutchman. "You sort of have to shift your mind-set, just as you'd change the setup on your car after racing on a street course.

"We did well at the test earlier this year (fourth fastest), and I can't wait to get back there."

After Power in the standings, Justin Wilson is still within striking range of Bourdais. He's 41 points back and could cut that gap in half with a good weekend for R-Sports. His teammate Alex Tagliani scored his only Champ Car race win at Road America in 2004.

Although former F1 driver Doornbos holds a commanding lead in the Champ Car rookie of the year battle, there is an interesting competition for second place between Simon Pagenaud and Graham Rahal, who both advanced from the Atlantic Championship feeder series this year. Team Australia's Pagenaud, the 2006 Atlantic champion, has scored nine more points than Rahal (Newman/Haas/Lanigan Racing) so far this year.

PKV Racing's Tristan Gommendy should be quick in qualifying at Road America, and his Swiss teammate Neel Jani has three podium finishes in the last five races.

Because of its long straights and high-speed corners that produce average lap speeds of around 140 mph, Road America's Champ Car races sometimes turn into endurance races. If there are not frequent cautions, drivers should complete around 50 laps over the course of the one-hour, 45-minute contest.

Forsythe Championship Racing's Paul Tracy claimed one of the best wins of his career at Elkhart Lake in 2000, driving from back to front without the benefit of a full-course yellow. Tracy also won there in 1993.