The Champ Car fan awoke with a shout and a start. He was soaked in cold sweat.

"I just has the scariest nightmare," the man croaked. 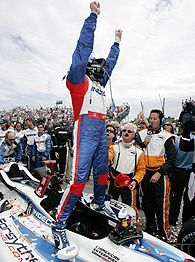 "I dreamed Paul Tracy will be racing in the IndyCar Series next year."

The man shifted restlessly under the covers and reached for a glass of water.

"I also used to think that the notion of Paul Tracy in the IRL was ridiculous," the man said. "After all, they robbed him of the 2002 Indianapolis 500 and he bears a grudge to this day. He treasures a model of the Borg-Warner Trophy with his face on it that a fan gave him. But this dream was so vivid -- so realistic -- it convinced me that it could really happen."

His wife, who is a bit of a Champ Car enthusiast herself, sat up. "Maybe you had better tell me the whole story," she said.

He paused for a moment before beginning. "You know, many of the things Champ Car has done over the past few years defy explanation," he said. "But the one rock-solid thing the series has going for it is Paul Tracy. The fans love him, the media loves him, and he's pretty much carried Champ Car's three Canadian races on his shoulders.

"Given Champ Car's record, I suppose it's only natural that they would try to sabotage themselves by forcing out their only recognizable star driver," he added.

"How -- and more importantly, why -- would they do that?" she queried.

"PT didn't win a race in 2006 and he was lucky to win one this year," her husband said. "Forsythe Championship Racing's form has slipped pretty dramatically from 2003, when Tracy won the Champ Car championship in his first year with the team. In fact, you could argue that Tracy hasn't been a serious championship contender since 2004. It's no great secret that a lot of notable open-wheel racers began losing pace in their late 30s, and Tracy will turn 39 this week.

"Anyway," he continued, "Gerald Forsythe blamed everybody over the last couple of seasons from mechanics to engineers to sponsor hunters for his team's demise, even though he was an absentee owner for much of the past year. Now I dreamed he finally turned his sights on Tracy. Forsythe has a new partner in his team, Dan Pettit, who has a reputation as a bit of a bean counter. Some people even call him the 'Kevin Savoree of Champ Car.'"

The man paused to chuckle at the comparison with Savoree, the co-owner of IndyCar Series team Andretti Green Racing.

"In my dream, Pettit convinced Forsythe that he should tear up the five-year contract that he gave Tracy to keep PT out of NASCAR," he said. "Pettit has Justin Wilson under contract, and I guess he figures that Wilson is a better bet to lead the team -- even if he doesn't put fans in the seats. It's pretty ironic that Tracy opted to stick it out with Champ Car, especially now that his old friend and teammate Dario Franchitti has jumped into stock cars.

"Forsythe wants Tracy to fly to Chicago this week for a meeting, where he will be given the option of having the remainder of his contract bought out, or to continue with Forsythe/Pettit Racing -- with something like a 70 percent pay cut."

"I think he did," replied her husband.

"Now here's where my dream got really strange," he continued. "Before Champ Car could react to what Forsythe had done -- maybe by putting a deal together for Tracy to return to Newman/Haas/Lanigan Racing, for whom he drove in 1995 -- the IRL swooped in. More specifically, Honda made a play to strengthen the IndyCar Series while at the same time dealing Champ Car a decisively crippling blow."

"What happened?" gasped his wife.

"Honda certainly knows how to strike when the enemy is at its weakest," he said. "Remember how stunned the American open-wheel racing community was when Honda made its famous Carb Day 2002 announcement that it was jumping from CART to the IRL?"

"It was like a nuclear bomb," the wife recalled.

"Absolutely," countered her husband. "And if Tracy were to jump from Champ Car to the IndyCar Series, it would have the same effect now. It would kill Champ Car's Canadian base and it would crush the series' race promoters in America and abroad. Justin Wilson and Will Power are great drivers, but they have vanilla personalities and no public profile in America.

"Here's the capper: In my dream, the guy who makes the whole 'Tracy to the IRL' deal happen is Tom Elliott, the retired executive vice president of American Honda, and the man who created Honda's ultra-successful U.S. racing program back in the early '90s.

"I know Tom Elliott is a kindly looking gentleman with white hair, but I never figured him for some sort of Ghost of Christmas Future. Elliott wasn't exactly delighted with Honda's move into the IRL, but he's smart enough to know that American open-wheel racing won't thrive again until there is just one series -- and it looks more and more like that's going to be the IndyCar Series. Honda has the power and the ability to dictate the terms."

The woman took a moment to soak it all in. "It's so far-fetched it could actually be true," she said. "But who would Tracy drive for?"

"Here's where the dream got a little bit fuzzy," the man said. "Once he got over the sheer shock, Tracy warmed up to the idea of switching to the IRL. But the initial offer was a ride with Vision Racing -- you know, Tony George's team. PT wasn't too excited about that and basically told them he won't do it unless he gets to drive for Team Penske or Target/Ganassi Racing. Their 2008 driver lineups are set, so that's unlikely to happen, but as of mid-December, there are still openings at Rahal Letterman Racing, Panther Racing and a couple of other teams that might be a solid enough option to satisfy him."

"Wow," exclaimed the wife, letting out a low whistle. "It could all really happen, and that would probably be the death blow for Champ Car. By the way, how did your dream end?"

"That's the strangest part," he said. "The last thing I remember was watching a racing news program where they are reporting on the 'Tracy to the IRL' story. Suddenly, that reporter, Robin Miller, started going crazy. He was shouting expletives at everybody and they finally had to send a fleet of security guys in to drag him off the set. He kept screaming, 'It's over! It's over!'"

"Well, honey, if Paul Tracy switches to the IndyCar Series, it is over for Champ Car," sighed the woman. "Now please go back to sleep."