Not Jeff Gordon. Not Tony Stewart. Not Robby Gordon.

All of them were beaten Sunday at Infineon Raceway by the rookie with three names and a funny accent.

Juan Pablo Montoya earned his first Nextel Cup victory in the Toyota/Save Mart 350, proving without a doubt that he knows how to get it done in a stock car on a road course.

The Colombian racer did it earlier this season at Mexico City, making a remarkable drive to the front to win in February.

But that was a Busch Series race. The Cup road-racing stars weren't there. Many people still doubted Montoya could outduel NASCAR's big boys in a similar situation.

How wrong they were. Watching Montoya steer a car on a road course is like watching Jimi Hendrix play a guitar while listening to Andrea Bocelli sing.

It's a virtuoso performance of skill and daring talent.

Montoya, 31, becomes only the third foreign-born driver to win a Cup event. He is the first to do so in 33 years.

Mario Andretti, who was born in Italy, was the first. The last before Montoya was Canadian Earl Ross, who won on the tiny half-mile oval at Martinsville, Va., in 1974. 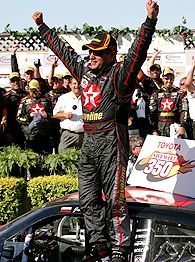 Montoya's victory also is a shot in the arm for NASCAR's diversity effort. It's comes on the heels of Formula One making international headlines with rookie Lewis Hamilton, the first black driver in series history, earning back-to-back victories in Montreal and Indianapolis.

"I think this [victory] is really good for all of NASCAR and its diversity plan," Montoya said. "It's good for the whole sport.

"But I'm more relieved than excited. I know we're a little behind on the ovals. But to get our first win in the first year is huge. It's a big boost to everyone on the team."

Ironically, it was Hamilton who replaced Montoya on the McLaren-Mercedes F1 team after Montoya opted to give NASCAR a try.

Montoya called his old boss, NASCAR team owner Chip Ganassi, to ask if Ganassi had a ride for him. Montoya won a Champ Car title for Ganassi, along with an Indy 500 in his first try.

"The reason I came back to Chip is he's just like me," Montoya said. "He wants to win as bad as I do."

Sunday was the first win for the Ganassi team since 2002 , when Jamie McMurray took the checkered flag at Lowe's Motor Speedway.

"We all knew we had it in us," Ganassi said. "We've all won races and know how to win. And we have a guy that pushed the pedal now. That sure helps."

Even in victory, some NASCAR followers will say Montoya caught a break this time. Jeff Gordon started 41st Sunday after his No. 24 Chevy failed an initial inspection Friday morning. He wasn't allowed to make a qualifying attempt.

Jeff Gordon, who has five Infineon victories, finished seventh. He had to pit off sequence to gain track position during the race.

Stewart started fifth, but slid off the course on the opening lap and fell back. He finished sixth.

Robby Gordon led 48 laps, but pitted under green with 40 laps to go and couldn't get back to the front. He finished 16th.

For the record, Montoya started 32nd after a disappointing qualifying lap Friday. So his team also had to take some chances to move forward and think about fuel strategy.

With 30 laps to go, Montoya was third. Jamie McMurray had the lead and Kevin Harvick was second.

A lap short for most drivers, not Montoya. He made it to the end doing something he rarely does -- showing patience.

He passed Harvick for second with 18 laps left, but Harvick didn't fight it. He thought Montoya would run out of gas before the end.

"It's really hard here to save a lot of fuel here," Montoya said. "I just had to be patient on the throttle. I was trying to save fuel by downshifting really late.

"I knew it was going to be close. I was saving a lot on the fast corners, letting the car roll for a long time before getting back in the gas."

He shifted his style in the final laps. Montoya often hit the rev limiter on the engine early in the race, going through the straights in third gear to make moves past other drivers.

He played it right at every moment, except one. With 12 laps left, Montoya got inside McMurray on the hairpin turn, but the move caused him to go up the track and McMurray got back by him.

Crew chief Donnie Wingo kept telling Montoya to be patient. Montoya was criticized after his Mexico City victory because he bumped teammate Scott Pruett to take the lead.

No controversial move was needed this time. He passed McMurray for good on Turn 2 with seven laps to go.

The only thing that could stop Montoya at that point was an empty fuel tank. But he had done enough to get the No. 42 Dodge to the checkered flag.

It was the first time a manufacturer other than Chevrolet won a race in the new Car of Tomorrow.

The win was perfect timing for Montoya's team. His sponsor is Texaco. Chevron, Texaco's parent company is located 45 miles from the Sonoma track in San Ramon, Calif.

So the people paying the bills were at the track Sunday, giving Ganassi a chance to say, "I told you so."

"We had our share of pundits criticize us lately," Ganassi said. "It was easy to let a little doubt creep in your mind.

"But this guy [looking at Montoya] never once flinched. That's what's great about him. The fire still burns in him to race at the front."

Terry Blount covers motorsports for ESPN.com. He can be reached at terry@blountspeak5.com.