"I'm still a mechanical guy. I can come up with ideas to beat money in certain cases. But when it becomes all about money, that you have to buy something to go faster, there's going to be a limit to how much I can buy."
-- Ray Evernham

Ray Evernham isn't running ads in newspapers or buying time on television and radio. He doesn't have a personal message board blogging for support that his manufacturer, Dodge, can't provide during a time in the automotive business when layoffs and quarterly losses are commonplace.

But the owner of Evernham Motorsports is looking for a financial partner to help keep up with rising costs, and he believes other owners will follow suit if they hope to survive.

"It's something I'm going to have to do if I want to stay in the sport," Evernham said on Thursday during the last day of the media tour. "A lot of what's happening right now is business-to-business relationships with sponsors. I'm a racer. I don't have that.

"When I look at where we are going to be two or three years from now, it's going to take more than just having a fast car to get sponsorship."

Evernham already is running into that to a degree with his Truck Series program. He lost Betty Crocker as the primary sponsor for Erin Crocker and has basically shut down that program.

He also has put most of his developmental driver program on hold, noting Erin Crocker doesn't have a sponsor for the 12 ARCA events and four Busch Series events she's scheduled to run.

"I need to concentrate on competition and find a partner that plays golf with billionaires so they can bet on shops and get us some money," said Evernham, who won a Nextel Cup Series-high six races last season with Kasey Kahne.

Roush has been working on a partnership that likely will result in a name change for his organization for more than a year. He said it was necessary to keep up with inflated costs as a result of Toyota entering the sport. 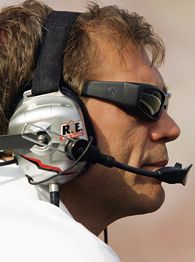 Roush contended Toyota is providing as much as 50 percent of the $15 million to $20 million it takes to field a top car while teams traditionally get 10 percent from the manufacturer and the other 90 percent from sponsors and winnings.

"Upsetting that balance could be immediate and catastrophic," he said.

Roush said Ford, which announced on Thursday a record $5.8 billion loss in the fourth quarter, has proposed upping its support to 12-14 percent next season. He also said that won't be enough if his fears about Toyota are correct.

Evernham doesn't blame Toyota as much as he does the direction of the sport.

"When something has grown this big, it was inevitable it was going to happen. It's no different than the NFL or Major League Baseball. Toyota  people look at it and say that is the catalyst, but it was coming anyway."

Evernham said Dodge has done a good job of moving money around to help in hard times, but he understands there is only so much it can do.

Mike Accavitti, the director of Dodge Motorsports operations, said Dodge's NASCAR commitment hasn't changed amid major budget cuts. He said the company sees the value in the sport where it pertains to marketing and selling cars.

But he agreed there is only so much Dodge can do financially.

"I've always contended if it's a money burning contest, you've got the wrong partner," he said, adding Dodge has no intention of leaving the sport. "Not saying we are cheap, but we've never had a lot of money we just throw at things.

"But we do have technologies, buying power, processes, manufacturing methods that we can give to the teams and share with the teams -- in lieu of the cash -- that they still get value out of."

Accavitti also agreed with Evernham that the climate is not Toyota-driven, saying research shows Dodge is competitive with the foreign manufacturer that enters the sport this year.

"From a Toyota standpoint and what you hear, it's like Bigfoot," he said. "They give this guy $10 million and free engines for the rest of his life for 20 cars? C'mon.

"Toyota, they have smart people working for their company. They're not going to want to overspend because you set the expectations."

Evernham believes the Car of Tomorrow, which will be used at 16 races this season, will eventually reduce costs and open more opportunities.

He's about three months from using robotics to build COT suspensions and would like to be in position to mass produce the car and sell them to other teams by the end of the season.

"In theory, we can start to make jigs and fixtures and use robotics to weld, which will stop me from having to increase the number of people I have [building cars] and put people on things like making the car go faster," Evernham said.

Evernham doesn't have a time frame for when he'll have a partner. He's interviewed several prospects, but none that fit his model.

Not everybody agrees a partner is necessary. Roger Penske of Penske Racing considers racing to be more of a hobby that is supported by all of his other businesses.

Rick Hendrick of Hendrick Motorsports has made his millions in the automobile dealership industry, not NASCAR. He puts everything earned in Cup and Busch back into the company.

"I feel we're as capable as anybody in the sport when it comes to the resources we have to go win races," said Hendrick, who has won six Cup titles with Terry Labonte (1), Jeff Gordon (4) and reigning champion Jimmie Johnson (1).

"Until something else happens, then maybe well have to adjust."

Hendrick said NASCAR isn't the place to be if you're a financial partner looking to make a profit. He didn't understand Roush's complaint that he made only 3-5 percent profit last year.

"If you've got somebody that wants to just say, 'I want a piece of a race team and I want to win,' that would be a good partner," Hendrick said.

Evernham simply is looking for a partner that will allow him to win championships like the Hendricks and Roushes.

"I'm still a mechanical guy," he said. "I can come up with ideas to beat money in certain cases. But when it becomes all about money, that you have to buy something to go faster, there's going to be a limit to how much I can buy."