LONDON -- McLaren boss Ron Dennis is no fan
of NASCAR, with its lines of growling stock cars rumbling
bumper-to-bumper around ovals for hours on end.

"You know one single thing that really, really upsets me?,"
he said last month when the talk turned to Formula One's
commercial future.

"It's every time that I read about NASCAR. It's just
amazing. I mean they are just full up. Every race is full up,
they've got more income, more television revenue and it's boring
as hell. 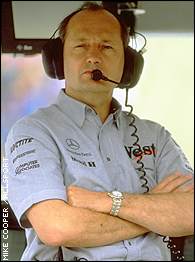 "That machine is working and yet we've got a much better
show," he added.

Sunday's Daytona 500, the 'Great American Race', will have
given him more to chew on.

Set aside the stereotypes of beer-swigging, good ol'boys
revving their Chevys. NASCAR is what Formula One, despite its
mass appeal elsewhere, can only dream of being in America. Just
look at the figures:

Some 200,000 fans bursting with brand loyalty packed the
Speedway on Sunday.

That was a drop in the ocean compared to the 75 million
Americans who follow a series that, while remaining true to its
southern roots, has a $2.4 billion television deal and ratings
second only to the NFL.

Seventeen of the 20 largest sporting events in America are
NASCAR-run and when the president of the United States turns up,
as George Bush did on Sunday, you know it's big.

It could teach Formula One a thing or two.

"If something is as successful as that then you are a fool
if you don't go and try and understand what the ingredients
are," said Dennis, who intends to attend some NASCAR races with
McLaren managing director Martin Whitmarsh to see for
themselves.

"Maybe we can bring some of them to our team. I think we'll
go and be pretty dismissive of the technology but I don't think
we'll be dismissive of all the things they do and how they've
managed to ramp it into such a success."

Formula One, with just one race a year in the United States
and no American team or drivers, may have the glamour but it
remains a mystery to many locals.

Although 200,000 turned up to watch Formula One at
Indianapolis in 2000, it is only 13 years since an ostrich race
in Phoenix drew a bigger crowd than the U.S. grand prix in
another part of town.

Ferrari's six times world champion Michael Schumacher,
unable to escape the fans' attention in Europe, checked in to
his Indianapolis hotel last year without a flicker of
recognition from the receptionist.

Formula One would love a slice of NASCAR's sponsorship --
prestige multinational household-name brands ranging from
breakfast cereals to fast food, confectionary and underwear.

NASCAR is also proof that motorsport does not need
cigarettes to thrive.

Some in Formula One, with half the 10 teams including
McLaren and Ferrari heavily sponsored by tobacco money, think
that is another lesson to be learnt.

"We don't want Formula One to be known around the world as a
tobacco-driven industry. That is bad for the non-tobacco teams,"
says Frank Williams, whose team ditched all cigarette
sponsorship in 2000 after years of dependance.

Entertaining the fans and giving them the value for money is
another issue that must be addressed by a sport that is as
exclusive as NASCAR is inclusive.

However that can only happen once the banks that control
Formula One's commercial rights and the carmakers have agreed a
deal mapping out the sport's long-term strategy.

"The truth is that every single team... wants Formula One to
be bigger by having more things at the circuit, more things to
entertain the public," said Dennis.

"We have talked about the whole Formula One village which
isn't just about merchandise, it's about simulators and having
the drivers attending.

"It's about a much bigger circus-oriented approach.

"The problem is that 75 percent of the commercial aspects
are owned by banks who do not want to put any money in
whatsoever and are only looking for a way to get their money
out," added Dennis.