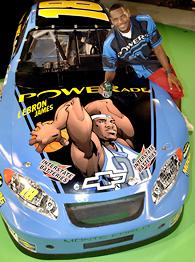 A comic book character resembling the 20-year-old NBA marketing icon will be plastered on the hood of the No. 18 car for the Sharpie 500 at the Bristol Motor Speedway to promote POWERade's new James-inspired flavor, SourMelon.

Coca-Cola will be flying in James to see his first live NASCAR race.

"I really like the look of the race car," James said in a statement. "But I'm thinking we need to add some new rims."

Coca-Cola will hand out commemorative comic books, with James and Labonte as characters, to fans at the track.

The flavor, which is scheduled to hit shelves in 32-ounce bottles on Oct. 1, is the second in the line called FLAVA23. Sourberry, which matched the colors of his Cleveland Cavaliers jersey, hit supermarket and convenience store shelves last September. James helped chose the flavor, which is colored an emerald green, the color of his jersey at St. Vincent-St. Mary High School.

Coca-Cola signed James two years ago to a six-year deal worth $2 million annually. Per the contract, James endorses both the POWERade and Sprite brands. Sources with knowledge of the contract told ESPN.com that James receives a bonus if POWERade's market share grows. La Kier would not confirm details of the contract.

For every four Gatorade bottles sold in the United States, one POWERade bottle is sold, but the Coca-Cola sports drink brand is doing extremely well. La Kier said that total volume sold has increased 23 percent year-to-date.

POWERade is an official sponsor of NASCAR, but in recent years has battled for placement with Gatorade, which owns victory lane at some tracks and has individual deals with drivers.

James isn't the first person to appear on a race car. Arnold Palmer, James Dean, Muhammad Ali, the Harlem Globetrotters, Carrot Top and the Allman Brothers have all appeared on cars. In 2001, Bobby Labonte's car featured the image of Cal Ripken Jr.