By the time they get to Dover, it's a good bet that Dale Earnhardt Jr. and Michael Waltrip will be singing a happier tune.

Only the drivers  and possibly their crews at Dale Earnhardt Inc.  will know whether or not any differences between them  real or perceived  have been ironed out. Still, it's doubtful they'll air any more dirty laundry in public, or continue to stoke a fire that flared up after Junior got into the back of Waltrip's Chevrolet during the Coca-Cola 600.

As Tony Eury Sr., Earnhardt's uncle and the team's director of competition, pointed out, there are enough things going on at DEI that the organization doesn't need a rift between its drivers as well.

And Eury knows the team needs to focus on finding more consistent race cars  and not wrecking them  if the team is to get its drivers into the 10-man Chase for the Nextel Cup in September.

DEI has struggled this year and it's uncertain as to whether last week's crew-chief change for Earnhardt will be enough to turn things around. 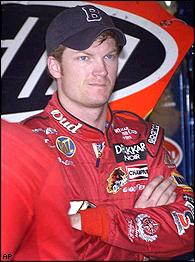 For whatever reason  be it a failure to communicate or simply growing pains that would have been smoothed out with time  things never clicked between Earnhardt and Pete Rondeau.

That, though, was only part of the problem. The team's cars haven't been quite right aerodynamically at a number of the 1.5-mile speedways, though that problem doesn't appear to be nearly as severe this year.

But in a season dominated by drivers from Hendrick Motorsports and Roush Racing, it's obvious something has been missing. Steve Hmiel, Earnhardt's interim crew chief, thinks the problem is that DEI hasn't run its operation the way those other teams have.

Hendrick Motorsports has the teams of Jeff Gordon and Jimmie Johnson in one shop and moved the teams of Brian Vickers and Kyle Busch into a new shop, along with Terry Labonte's part-time team, before this season. Roush Racing has a similar setup with its five full-time teams sharing two buildings.

That leads to a better sharing of information between the teams, something that apparently has not been happening between the teams of Earnhardt and Waltrip. Hmiel aims to fix that problem.

"Richie [Gilmore, the team's vice president] and myself and Tony Sr. and Tony [Eury] Jr. [Waltrip's crew chief] and all the other crew chiefs have talked a lot this week and we're going to a strictly open-book policy where we'll use engineering unilaterally," Hmiel said last week.

"We'll bounce aerodynamic things off each other. Our tire guys will work together. It'll be more similar to what the teams that are winning all the races are doing. That's talking amongst themselves and using all the assets that are available to them to become a better race team.

"Pete wasn't against that. We just weren't at that point in our company's history. The thing that needs to be said about all this is that if it failed [now that Hmiel's working with Earnhardt], it's because I didn't use the people that are there. And if it succeeds, it's because all the people that were there did it  not because it had anything to do with me. It's just a matter of taking the personal face off the crew chief and making DEI an entity that can win races regardless of who's sitting on top of the pit box."