DAYTONA BEACH, Fla. -- Dale Earnhardt Jr. made it clear on Monday that the tumultuous relationship with his stepmother would be a factor in negotiations to return to the Nextel Cup organization his father built after the 2007 season.

He also made it clear he wants to return. 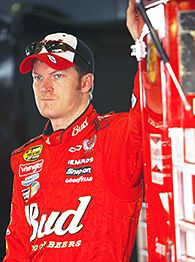 Ownership appears to be the biggest stumbling block.

"That's the obvious," Earnhardt said during the first day of preseason testing at Daytona International Speedway. "I want to be very involved in the company.

"Aside from [DEI], I have no interest in ownership."

To own a part of DEI, Teresa Earnhardt would have to relinquish at least partial control of an organization she has run since Dale Earnhardt was killed on the last lap of the 2001 Daytona 500.

That means comments such as the one she made in the Dec. 14 Wall Street Journal about how Earnhardt needs to decide whether he wants to be a driver or a celebrity will make negotiations more emotional than most.

She already has stepped aside in hopes of speeding up negotiations that DEI director of motorsports Richie Gilmore anticipates will be completed by May if not sooner.

"My relationship with the car owner is definitely going to be a factor in my decision to drive there," Earnhardt said. "I haven't talked to Teresa about what she said in [the Journal]. I figured if anything needed to be said she'd call me up and say it.

"But you know, my and her relationship definitely factor into my decision."

Earnhardt became increasingly pointed in remarks about the contract and his stepmother during a break between practices, at one point saying the relationship with Teresa "ain't a bed [of] roses." He took several shots at her, indirectly referring to her absence from the track.

He admitted the uncertainty of having the contract issue settled is the most frustrating part about approaching this season.

He also said it is the goal of him and his sister, JR Motorsports executive Kelley Earnhardt Elledge, to get a deal done.

"I like driving the red Bud car with the No. 8 on it," said Earnhardt, whose deal with Budweiser also expires after the season. "To drive that car I guess I have to drive for DEI. I don't know really what to tell you other than we're going to get through the contract and finish up a new deal.

"We've hit a few roadblocks with things they're willing to do and not willing to do. To get this deal done is going to be very difficult, but I feel we can get it done."

Gilmore said negotiations are on the fast track and that he hopes to have a deal sooner rather than later to avoid weekly press conferences such as Monday's.

"Before we come back here in February [for the Daytona 500] would be my wish [to get a deal done] so we wouldn't have the distraction of that every week," he said. "I would say realistically probably May."

Gilmore said losing the most popular driver in NASCAR never has been a consideration for anybody at DEI, including Teresa.

"He's just like Derek Jeter to the Yankees," Gilmore said. "He's our star player. It would be fair when you compare Junior to other famous athletes like Michael Jordan with the Bulls. He's a franchise player.

"We feel confident we're going to get it all worked out and we'll have an announcement shortly."

"I'm around Teresa pretty much every day and I've never heard her comment that way," he said. "Teresa doesn't get out there a lot to the media, but when I talk to her it's never negative against Junior that way."

Earnhardt didn't sound convinced, noting his popularity should be an owner's dream rather than a hindrance.

"I don't know, she might have just been having a bad day or something when she said that," he said. "I really don't know where that was coming from. I didn't want to comment to the press.

"I really didn't appreciate it whether she was taken out of context or not."

Earnhardt said his relationship with his stepmother hasn't changed since he was 6 and moved in with her and his father.

"I don't want to get too personal," Earnhardt said. "Teresa is my stepmother. I have a mother at home I have a very good relationship with. Mine and Teresa's relationship has always been very black and white, very strict and in your face.

Earnhardt didn't expand on those feelings, but at no time was there an outpouring of affection.

He also made it clear that Kelley, not Teresa, was the most influential female relative in his life.

"Kelley is a big part of my contract negotiation," he said. "In no way, shape or form will she not be a part of that."

Gilmore said Teresa has tried to remove herself from negotiations as much as possible "because she thinks it will happen faster maybe if she takes the personal side out of it."

He said Earnhardt has become DEI and he can't imagine the company without him, although Earnhardt does talk of driving his father's black No. 3 for Richard Childress Racing late in his career.

"I've never even thought that far down the road," Gilmore said. "Being in the circle with [Earnhardt] and Teresa I don't believe any of us have thought that way.

On that Earnhardt had no dispute.

"Unless we can't get a contract," he said with a smile, "And then I might take a year off."