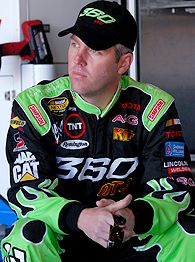 "By no means are we slowing down with that team," Baldwin said. "But reality is reality. You don't make races, you're going to be out of business. Any team. Not just the 36. We're certainly not in that position right now."

Driver Jeremy Mayfield has yet to qualify for a race this season, spawning speculation that the team was in peril.

"The reality of it is we've missed the first four races," Baldwin said. "It's been a hard thing to swallow as a race team. We've just got to keep working with the 36, figure out what Jeremy really wants [in the car]."

Baldwin explained that Mayfield's driving style is vastly different than that employed by Dave Blaney, driver of BDR's No. 22 Toyota. As a result, what he wants to feel at the wheel is also quite different.

"Jeremy's a finesse driver," Baldwin said. "He feels a lot of things in the steering wheel. Some things he doesn't like compared to Dave -- Dave can just drive through the situation where Jeremy is feeling a lot of things and it's making him uncomfortable.

"The team is close. The people working on it are doing a really good job. The car is prepared really well. The car is built right. But I don't know if it's being built to Jeremy's liking. Being associated with Jeremy in the past [at Evernham Motorsports], there were some differences we had to do back then between the two drivers. It's pretty much the same here, we're finding out."

"By no means are we slowing down with that team. But reality is reality. You don't make races, you're going to be out of business. Any team. Not just the 36. We're certainly not in that position right now."
-- Team manager Tommy Baldwin.

To combat the situation, Baldwin said cars dedicated to Mayfield are being cut up and rebuilt. He said they went to the wind tunnel Thursday and will go twice more in the coming two weeks.

"If we made the races and could run a race we'd learn a lot more, but we haven't," Baldwin said. "We've gone to work and will hopefully bring out a whole new [car] for Texas. Car of Tomorrow is a whole different beast. But for Texas, we'll bring out a new car and see what we got."

Will the Car of Tomorrow help BDR catch up to the pack? Baldwin says no.

"I wish we were all in the same box," he said. "Some teams with big pocket books have been testing these [Cars of Tomorrow] for a long time. You're going to see a big curve between teams, the way they run, the next two weeks. The amount of money they're pouring into this project, you'll see a lot of guys playing catch-up the next two or three months, for sure."

Baldwin explained that COT will separate the current haves and have-nots even further.

"It will for a while until we all get a hold of it, and get the cars tested a lot more," he said. "The teams that have been running well for a very long time had the opportunity to jump on this project and worry about the future.

"The teams that have been struggling, like Bill Davis racing the past few years, had to worry about right now. Not the future.

"The Hendrick guys, they've tested that Car of Tomorrow probably over 35 times. We've tested it six or seven. There's a huge learning gap between the teams that have been successful and could test these cars from its inception."

Baldwin said Toyota is doing everything it can to assist BDR's development, and that Mayfield is fully engaged and handling it well.

What about him? Is it time for a full-time return to crew chief?

"I don't want to," Baldwin said. "I want to keep working on the future of Bill Davis Racing as well as what's going on today. I've had to stop a lot of things, change my focus because of this role.

"But until we get into making the races and the direction we need to go there's no sense in bringing someone else into the company just yet."

Baldwin also noted that BDR development driver Bobby Santos will make his first ARCA start this weekend in Lakeland, Fla., and will run up to 12 ARCA races and up to 10 Busch Series events in 2007.

He feels the company is progressing positively. Now they just need to get the No. 36 in the field.

"If not I'm going to be getting old and cranky a lot quicker," he said. "It's hard on everybody. But we got a lot of good things going on. The focus is there. If we get in these races our learning curve will pick up vastly."