Robin Pemberton, NASCAR's vice president for competition, said the car was too low.

Pemberton would not speculate on the penalty, which could include a fine and points deduction, saying inspectors wanted to go over the car completely at the R&D Center in Concord, N.C., before a ruling is made.

Biffle's car, as well as the No. 5 of winner Kyle Busch, were taken to Concord as a part of what will be a routine process as NASCAR implements the Car of Tomorrow this season.

Pemberton said Busch would have the car back in time for Martinsville. That was good news to crew chief Alan Gustafson, who plans to use the car as a backup next week.

Dodge execs repeat commitment
Dodge will remain committed to the NASCAR Nextel Cup series regardless of whether Chrysler is sold, the director of Dodge motorsports said Sunday. 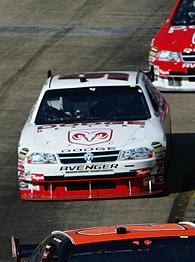 "Yeah, there are some things going on, things we're looking at, but it's not going to affect our racing program," Mike Accavitti said during the Car of Tomorrow's debut at Bristol Motor Speedway.

Accavitti and Tom LaSorda, the chairman of DaimlerChrysler, visited with the owners of three of Dodge's top teams -- Evernham Motorsports, Chip Ganassi Racing with Felix Sabates and Penske Racing -- before Sunday's race.

"We talked to everybody today," Accavitti said. "The message is pretty consistent. We don't intend on going anywhere."

"This is being handled by people at a much higher level than I am," Accavitti said. "As far as they're concerned, they'd like to bring a quicker resolution to it than a slower resolution.

"Every indication I have is it'll be sooner rather than later."

There have been reports that the sale could happen within the next week or so.

"Under any scenario, as far as we're concerned, we see us remaining involved in NASCAR," said Accavitti, noting Dodge's contracts with its NASCAR teams range from one to five more years.

"It's a great way to reach those fans and tell them about the performance brand of Dodge."

Martin's weekend 'off'
Mark Martin, who said he planned to barbecue at home Sunday, spent part of his first Cup-free race weekend of 2007 as a crew chief for Ricky Carmichael.

The motocross champion was making his stock car debut in a late-model stocks event at Columbia Motorsports Park in Ellisville, Fla. Carmichael finished third in his heat race, but had a flat tire in the main event that sent his car into the wall and ended his night.

"Ricky had to learn the lay of the land, and he did well," Martin told reporters after Carmichael's race. "He does know how to get up to speed quickly. We learned a ton tonight. I think we got the car working well for him by the feature, and he was really fast.

"He just had a couple of unfortunate incidents. Part of it is racing and part of it will be more avoidable as he gets more experience and a better feel for what the cars around him will do."

Martin was the Cup points leader after the first four events this year, but he skipped Bristol, missing his first Cup race in 20 years. Martin elected to stick to his plan of running a partial schedule this season.

The weekend off also gave Martin a chance to watch his son compete. Matt Martin, 15, finished fourth in his heat and seventh in the main event.

Cup rookie Regan Smith, who replaced Martin in the No. 01 Chevy at Bristol, finished 25th, three laps down.

Martin also plans to skip the Cup race at Martinsville next weekend.

Top 35 update
Dale Jarrett finished 42nd on Sunday to fall out of the top 35 in points to 37th.

That left Dave Blaney as the highest Toyota driver at 36th, meaning none of the seven Toyota teams are guaranteed a spot in next week's race.

Kasey Kahne didn't have a particularly good day, finishing 19th, but he moved up two spots to 34th to secure his position.

Notables that must qualify on speed next week include: Brian Vickers, Scott Riggs and Ward Burton.