BRISTOL, Tenn -- Richard Childress, in his first public reaction to lawsuit proceedings between NASCAR and AT&T, told ESPN.com Saturday that he has no current plans to take personal legal action against NASCAR in an effort to retain AT&T as sponsor of his No. 31 Chevrolet. 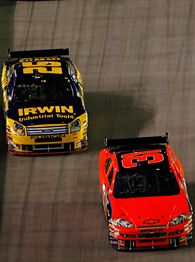 "I don't really have any plans to do that right now," said Childress, owner of three Nextel Cup Series teams.

The No. 31 showed up this weekend at Bristol Motor Speedway devoid of sponsor logos, and driver Jeff Burton has only small associate sponsor logos on his driving suit. AT&T claims NASCAR left them no choice but to bring a blank car. They said NASCAR would not okay alternate paint schemes submitted for approval following the 11th Circuit Court of Appeals' decision to overrule a temporary injunction that allowed AT&T logos under NASCAR's grandfather clause for telecommunication sponsors.

In response to AT&T's claim, NASCAR spokesman Ramsey Poston said Friday that AT&T has been "dishonest with the fans and with NASCAR, and it's time for that to stop."

Ultimately, the appellate court ruling left AT&T two options: either move the case to the Supreme Court or ask RCR to sue NASCAR.

Childress hopes cooler heads can prevail and a resolution can be reached between NASCAR and AT&T that would enable him to retain AT&T as a sponsor. He said all four parties -- NASCAR, Sprint, RCR and AT&T -- share responsibility in making that happen.

"There's got to be some give and take," he said. "You sit back and look -- at the end of the day it has to be a case of Sprint and AT&T trying to figure a way that they can both live in the same world."

He feels they've already proven it can happen.

"Let me give you an example: AT&T has been on the car for 14 weeks, and all the media [attention] has been on the Chase. That's Sprint's deal. They're getting plenty of value out of the Chase," he said. "And AT&T is over here marketing Jeff Burton. The world didn't stop when we put it on the car the first week.

"There's room for all of us. It isn't like AT&T bought Cingular. They owned Cingular anyway. They're just re-branding it. To find a way where all of us can survive in this world it would be good for RCR, good for the sport."

Childress wouldn't specify how this development affects his company financially, but did stress that RCR is financially stable.

"The main thing is you want to keep a company in the sport like AT&T," he said. "They're really good for the whole sport -- not just for RCR and Jeff Burton. The activation dollars they spend with the media and television -- they spend more in media than they do with us."

Addressing NASCAR's claim that they are fighting AT&T on behalf of the entire industry, Childress said, "I don't buy that," and he also questioned whether Sprint/Nextel ever had exclusivity in the first place.

"No matter what the name is, [NASCAR] was already competing against two telecommunications companies, two good sponsors that activated in the media and everything else," he said. "It wasn't exclusive.

"There was already two companies grandfathered in. To me that's where they're missing the boat. Those same 40 million [Cingular- customers that were out there before are still out there today. All they did was change the name. It's not like we're trying to bring a brand new [sponsor] in right now against an exclusivity right.

"They have two companies involved in the sport today, so exclusivity doesn't work with me because they were already in the sport. It may matter to them that the branding changed, but at the end of the day it wasn't exclusive to start with."

Childress admits the proceedings have strained some longtime personal relationships with NASCAR officials.

"It's been very hard, but all of us have tried to look at this as business and then have a personal relationship," he said. "It has tried all sides of a 40-year friendship. But I think true friends, at the end of the day, like they are and like I am with them, we're going to keep this as business here, and our friendship over here."

All said, he is ready to move on toward a resolution.

"I'm hoping there's a way to get it out of the courts and out of the public eye," Childress said. "It'd be great if there's no losers, if we can figure a way that thing could work its way out so nobody's happy with the outcome but we all live with the decision to move forward.

"That's where I'd like to see it go. But it may end up staying in the courts and going back and forth for the next two years. Right now, hopefully there's some way, some how, that we can all live with this thing. We lived for 14 races with it. I'm sure Nextel got their value.

"I'm no different than AT&T and NASCAR and Sprint. We're making a lot of attorneys rich, and uniform companies and decal companies. That's where the cost is. Attorney's fees are very expensive. It's very frustrating, but it's part of the business. I've been the sport 40 years or more, and I've been through a whole lot, but this isn't the worst thing I've ever been through in the sport."

Marty Smith is a contributor to ESPN's NASCAR coverage. He can be reached at ESPNsider@aol.com.