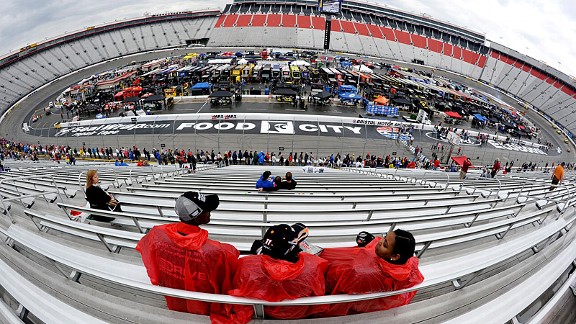 Do fans miss the old Bristol so much that they refuse to go to the new Bristol?

It sure looked that way Sunday, when almost half the seats appeared empty as Brad Keselowski won his second consecutive event on the half-mile oval.

What is going on here? It's not Keselowski, who simply proved he doesn't need any timing-lines manipulation to win at Bristol.

But where is everybody? This place was NASCAR's shining example of success, the Rose Bowl of racing.

It wasn't long ago that 160,000 people packed the house. You had to will your tickets to family members or give a scalper your first born just to get a seat for the show.

A lot has changed since those days. The economy nosedived, and the part of the Southeast where Bristol Motor Speedway sits was particularly hard hit. The area has limited hotel space, and those room rates skyrocket for a race weekend to prices you would expect to pay on New Year's Eve in New York City.

But based on what fans say on our chats and comments section, it isn't the economy or the prices. It's the reconfigured track. The old banging and bashing days of Bristol are gone, the days where drivers often wanted to punch each other after a typical wreck every 40 or 50 laps.

Since the track was repaved with progressive banking, it's more about actual racing with side-by-side action. Drivers love it and fans seem to hate it.

Just not enough wrecks now, although Sunday's race had a big one early that ruined the day for Kasey Kahne, Carl Edwards and Marcos Ambrose.

But it was shocking and sad to see so many empty seats at a facility that was NASCAR's showcase for years.

Let's be fair and note that Bristol has close to 160,000 seats. So half full still is 80,000, which is more than a full house at other NASCAR tracks and more than most NFL stadiums hold.

It's the fact that Bristol was packed with people for so long that makes Sunday's crowd seem comparatively sparse.

"I just think you're seeing a shift to where it's harder to sell tickets, but there's still a lot of interest in the sport," Keselowski said. "I think you have to be very careful of how you read into that because, obviously, each person is different. But I still think the sport is very strong and very healthy."

And he's right. This isn't about the health of the sport. It's about Bristol.

Attendance was outstanding at Phoenix and Las Vegas in the two races before Bristol. Not sellouts, but big crowds with the grandstands close to full. So Bristol's poor attendance Sunday seemed out of line with the trend.

No doubt the economy has something to do with it. And the forecast called for rain. It rained a little Sunday morning before the race. Maybe some people stayed home to watch the NCAA tournament.

But those are secondary reasons. It's the track and how it has changed, along with its perceived new reputation for less exciting racing, that likely is keeping people away. And that's not something that easily can be changed.

That would be never, until now.

Sadler's victory at Bristol continued the best start of his career. He has yet to finish worse than third.

And his win Saturday continued the most surprising trend in NASCAR this season -- a winless showing by the Cup stars in Nationwide events. The Cup boys haven't gone 0-for-4 in the Triple-A league in 17 years.

Four Cup regulars finished in the top five spots at Bristol. But Sadler beat them to the finish line, partially because crew chief Luke Lambert had him stay on the track during the last caution and partially because Sadler just had a darn fast car.

The Nationwide regulars are outrunning the Cup guys. This is no fluke, except possibly the season opener at Daytona where James Buescher (who is a Camping World Truck Series regular) went from 11th to first by avoiding all the last-lap carnage.

Whatever the reason for the Cup regulars' slump, let's hope it continues. This is what the Nationwide Series has needed for years. It gives the developmental league its own identity and helps make stars out of the guys who aren't in Cup.

As for Sadler, who raced 12 seasons in Cup, a return to the top series full time could come his way if he continues to win races (and possibly a championship) in the Nationwide Series.

Another thing that could give the Nationwide Series a boost is a victory by Danica Patrick, or at least some competitive runs by her. That hasn't happened in the first four races this year. She finished 19th Saturday, two laps down.

Two rookies rank in the top five in the standings -- Cole Whitt (Patrick's teammate at JR Motorsports) is fifth and Austin Dillon (the 2011 CWTS champ) is fourth.

The Camping World Truck Series is off until March 31 at Martinsville.

Terry Blount is a senior writer for ESPN.com. He is the author of "The Blount Report: NASCAR's Most Overrated and Underrated Drivers, Cars, Teams, and Tracks." He can be reached at terry@blountspeak.com.