Besides the strange pail, besides the fact that he was missing all but two of his front teeth, the Tampa native stood out because screwed into the top of his navy blue baseball helmet was an authentic Miller Lite beer tap.

"People love it," he said. "They always come up and want to pump it. Everybody wants to meet me and be friends."

This week has been no different. Except that the people who have wanted to shake his hand and get on his good side have been representatives of the Republican National Committee.

It has nothing to do with the grout. Even less to do with the tapper. Instead, Cappell has been targeted because he's the poster boy for a critically sought-after voting demographic seen by some as capable of tipping this fall's presidential election.

At every turn this week, there have been Democrats, Republicans, even independents, urging Cappell, and other middle-aged white, male NASCAR fans like him to vote.

"This is a group of people that may have felt neglected in the past," said Noe Garcia III, a Republican volunteer dressed in non-NASCAR-like khakis and T-shirt. "We want to speak directly to them. We want them to know that we share many of the same values."

It's here in the heart of NASCAR land, a place where mullets, beer bellies and camouflage are cool, where Cappell is a god for having a beer tap growing out of his head, that some of the biggest political wars are being fought for the 2004 presidential election. Remember "Soccer Moms"? The middle-aged suburban female demographic that Bill Clinton's political pundits used to carry Clinton to the White House?

The hot group in 2004 is "NASCAR Dads," a term given to typically small-town middle-aged white men, typically from the South, who consider themselves Democrats but lean Republican when it comes to the president. NASCAR Dad, coined by Washington-based Democratic adviser Celinda Laker, is a blue-collar family man who worries about escalating taxes, paying his bills and labor jobs moving overseas. 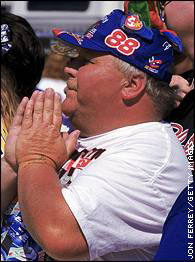 The group consists of an estimated 45 million people -- many of whom, Lake believes, are getting disenchanted with President Bush.

It has made guys such as Cappell, chugging his cold Miller Lite while wearing a faded Rusty Wallace T-shirt, the hottest demographic in politics.

"If they want the NASCAR Dads, I guess that's what I am," said Cappell, who brags that his daughter was born the exact minute Bobby Labonte crossed the start-finish line to win the 2000 Southern 500. "Come and get me."

It should be of no surprise, then, that President Bush will be in attendance Sunday at the 47th running of the Great American Race. While Democratic front-runner John Kerry rides motorcycles, rarely wears a tie and talks about his love for hunting and fishing, Bush's aides are spreading word that their boss is a NASCAR fan.

It's not an entirely new political ploy. During the 2000 campaign, President Bush was Grand Marshal for the Pepsi 400. Eight years earlier, George Bush Sr. came to the 400 during an unsuccessful reelection bid. And in 1984, President Ronald Reagan gave the starting command for the 400 from Air Force One.

But this is the 500. Supposedly the biggest race in sports. And all week long, hundreds of college-aged volunteers have combed Daytona's grounds, using stickers, buttons, deluxe buses, even NASCAR drivers themselves, to get attention and urge fans to vote.

In NASCAR's corporate village, where everything from beer to chocolate to corn to the U.S. Army is pitched, Republican volunteers have set up shop with their grass-roots bus, calling on the help of Chip Ganassi, Wallace and Bill Elliott to spread the word. It was the first time the committee came to Daytona.

"Obviously, they've targeted a good area of the demographic," Elliott said. "It's a great marketing strategy. I mean, where else are you going to find this many people, for an entire week, who you can reach? That place doesn't exist.

"I think President Bush has done a great job -- especially with all he's had to deal with after 9-11."

On Saturday, there was Cappell, standing atop his bucket, listening to Elliott, who was standing in front of the Republican bus urging fans to re-elect President Bush.

Standing next to Cappell was 31-year-old Marcus Ranning, who stopped to see what all the commotion was while balancing two 30-packs of Coors Light on each shoulder.

"Is that Bill Elliott?" Ranning asked. "What's this all about?"

"They think that we're just a bunch of dirty rednecks, whatever they want to call it," Ranning said. "It's like all these guys in ties suddenly telling us what we want to hear so they can win."

One fan shouted that Elliott should replace Vice President Dick Cheney as Bush's running mate. "Heck, he don't do nothing anyway," the fan said.

"Well, let's not go there quite yet," Elliott responded.

George Pyne, NASCAR's chief operating officer, recently wrote an editorial in several newspapers about the political buzz surrounding the core of his fan base. He wasn't overly excited about the stereotypes being conveyed.

"The term NASCAR Dad acknowledges that our fan base constitutes a large and growing segment of the electorate worth wooing. But the term has also been used to convey a narrow stereotype -- middle to lower-middle class people, living in rural areas. NASCAR embraces these fans, but its fan base is much broader than many political scientists may think."

Which, in a way, is all the better. NASCAR is perceived as a Republican stronghold. And the fact that its racetracks are becoming a political battleground is fascinating. And unprecedented. But will it actually work come November?

Most of the fans who listened to Elliott walked away without registering to vote or signing up as a volunteer. Cappell said he doesn't plan on voting. And Ranning doesn't see any way a handshake and a button will sway him from voting for whoever he thinks the best candidate is.

"When I go out to vote that morning, I'll figure out who the best guy is and that will be my guy," Ranning said. "The rest of this is nonsense."

Wayne Drehs is a staff writer at ESPN.com. He can be reached at Wayne.Drehs@espn3.com.