INDIANAPOLIS -- The Indy Racing League's most popular driver
was almost stuck in neutral.

Less than a month before the start of the season, things weren't
going well for Sarah Fisher. The only woman in the IndyCar series,
the only one ever to start from the pole in a major open-wheel
race, was without a ride.

Then, unexpectedly, she got word that Kelley Racing general
manager Jim Freudenberg might have something in the works for her.

"The next thing you know, here we are," Fisher said Wednesday.

The deal with Kelley, which did not re-sign Al Unser Jr. after
his contract ended in October, teams Fisher with former IRL
champion Scott Sharp. But it's not a full-time ride.

Fisher won't race in the opener Feb. 29 at Homestead, Fla., and
isn't sure how many races she will do. How much sponsorship money
they can raise -- the "bottom line," as she puts it -- will
determine that.

"It's more or less the fact I have a home that makes it so much
more comfortable," said Fisher, who was 18th in the IRL points
last year with Dreyer & Reinbold Racing.

"Jim and I can now go into a meeting together and say, `Here's
our team, here's our car, here's what we're doing,' and it's very
legit that way. If he's trying to sell a second program without a
driver, that's very difficult." 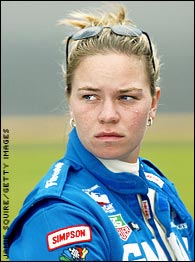 Fisher, 23, who began racing quarter-midgets in 1986, was the
youngest driver to compete in an IRL race in her series debut in
1999. She became the third woman to drive in the Indianapolis 500
the next year, had a career-best finish of second at Homestead in
2001 and started from the pole at Kentucky Speedway in 2002.

Last year, her best start was second at Richmond and her best
finish was eighth at Phoenix. For the third straight year, however,
she was voted the IRL's most popular driver by race crews and fans.

She also remains a valuable selling point for the IRL.

"Sarah brings a whole new segment of fans to the IndyCar
series, primarily female and primarily pre-teens and mothers," IRL
spokesman Fred Nation said. "Those are important segments for us
to reach to broaden our base. She's also a sentimental favorite
with many people.

"At any race, the longest line for autographs is for her,"
Nation said.

Even with no assurance how many races she'll be in this year,
Fisher said her prospects are "more positive" than in the past.

"Working with Kelley is a privilege in itself, and to go to
Homestead ... at least I'm going to be with Scott and watching
what's going on," she said.

The team returned to its Indianapolis headquarters after Sharp
tested in Phoenix last week. Even if sponsorship were secured now,
it's too late to get a car ready for Fisher in time for the opener,
she said.

"We're trying to get everything put together. Kelley Racing
believes in me. ... They're helping out with marketing and trying
to make sure it happens. It's just so exciting because they're such
a big team and have such a great reputation for doing good
things."

"It's going to be real tough to win," Fisher said. "The IRL
is certainly growing and gaining a lot more interest from all
fronts -- from fans, from sponsors -- and the more teams that join
us, the higher-level caliber teams, the better it's going to get
for everyone."