A fascinating story came to light while researching a recently-published book I co-wrote about Honda's successful CART engine program. It seems that Newman/Haas Racing came very close to signing as Honda's works team for 1996 and beyond, only for the deal to be scuppered at the eleventh hour because Carl Haas refused to leave adequate space on the car for a Honda logo. Honda instead joined forces with Chip Ganassi racing and the rest, as they say, is history.

In 2001, American Honda executive vice president Tom Elliott related the tale. "We were going to go with Newman/Haas in '96," Elliott said. "Robert (Clarke, general manager of Honda Performance Developement) and I made many trips to Chicago to meet Carl. It was going to be a factory team with two drivers and it came down to where we were talking about where the Honda logo would go on his cars. We told him where we wanted it and he said he didn't have the room. He said he could give us a tiny little space behind the popoff valve.

"We said, 'If you don't have room, we don't have engines for you.' And the whole thing went away, just because he could not find room for the Honda logo!"

In response, Haas said it didn't really happen like that. "That's not the whole story," he said. "We had a negotiation in good faith and I think we were very close. We did argue a little bit over some space, but that was not really the deal breaker. I think it probably came down to my having some loyalty to Ford more than anything."

Given Haas' penchant for loyalty, it was somewhat surprising to learn Monday that Newman/Haas Racing's return to the Indianapolis 500 for the first time since 1995 will be powered by Honda. After all, the team ran Toyota Champ Car engines in 2001 and 2002, and the team has participated in two IRL IndyCar Series tests using a Toyota-powered car. Most people took for granted that the NHR Indy effort would happen with Toyota.

Instead, the Newman/Haas hookup is another example of how seriously Honda is taking its participation in the IndyCar Series. Some Honda associates were not particularly thrilled about the company's switch from Champ Cars to IndyCars in 2003, but American Honda president Koichi Amemiya has been a big proponent of the IRL program, fueled by a desire to beat arch-rival Toyota both on and off the race track. The Newman/Haas entry brings the number of cars Honda will service at Indy to 11, backing up Clarke's pledge to supply enough engines for one-third of the field.

The rest of the Newman/Haas Indy assault consists of the team's regular Champ Car driver Bruno Junqueira and sponsor PacifiCare. The Brazilian, who claimed pole position at Indy in 2002 for Target/Ganassi Racing, will pilot the No. 36 Panoz G Force for a team managed by racing legend Jim McGee. Tim Wardrop will engineer the car, which will be prepared by a crew newly-recruited by McGee. Junqueira's regular Champ Car crew will service the car during race day pit stops.

Junqueira excels at high-speed corners and is eager to return to Indianapolis, where he finished fifth as a rookie in 2001. "It's going to be good," he said. "I like this track a lot and I'm glad that PacifiCare will be with us. The last time I was here the car was good and I put it on the pole. I think we had a chance to win the race before the car had a problem." 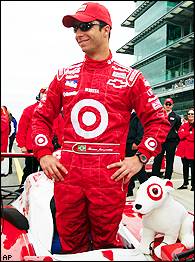 Working with Emerson Fittipaldi, McGee tried and ultimately failed to take over Pat Patrick's Champ Car team. American open-wheel racing's most successful team manager (with 89 CART and USAC race wins, including four at Indianapolis) decided to take some time off to evaluate his options and he believes the one-off run at Indianapolis comes at a perfect time for him.

"It's basically a favor for Carl," McGee said. "Carl has been awful good for racing over the years and he's added a lot to the sport. This is a good opportunity. Bruno is a capable driver, we have a good package and an adequate budget. Getting up to speed with the car will be the challenge.

"Our biggest test will be to get the car race ready before qualifying," he added. "Because of the Champ Car race in Monterrey (Mexico), Bruno will be gone after pole weekend. We'll have to do all of our full-tank testing before qualifying and things will have to happen pretty quickly for us. But I think we have a good group of guys."

Like many, McGee was deeply affected by the formation of the IRL and its effect on American open-wheel racing. But the ingredients Haas proposed were good enough for the 68-year-old to take a vacation from his vacation by going back to work for a month. Newman/Haas has no plans to race its IndyCar after Indianapolis.

"I have some mixed emotions," McGee said. "Things are different, let's just put it that way. It's another race and we'll see what we can do. I'm staying out of the politics -- all I was asked to do was put together a crew and a car for this race. But I'm not ready to retire. If a good deal comes up, I'm out there."

Haas has won Indy before -- he was co-owner of Haas/Hall Racing for Al Unser's 1978 triumph -- but Newman/Haas has never won the Memorial Day classic in 13 tries. There have been some classic near-misses -- Mario Andretti dominated in 1987 but broke late, as did Michael Andretti in 1992. NHR drivers have led 773 laps at IMS.

"Bruno has had some success in his two previous Indy 500s and we believe that the Honda/G-Force/Firestone combination is capable of putting Bruno and PacifiCare in the winner's circle," Haas stated. "Newman/Haas Racing has led many laps at Indianapolis and hopefully this year will be no different -- except that we hope to lead the final lap."