Three of its quit-smoking products -- the gum, the NicoDerm CQ
patch and Commit lozenges -- will be advertised on the rear decklid
of Casey Mears' car for the entire season. Nicorette will also be
the primary sponsor on the No. 41 Dodge for one race in a deal
estimated to cost the company $3 million annually. 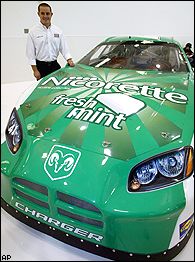 The anti-smoking products enter the sport one year after R.J.
Reynolds Tobacco's Winston brand ended its 33-year run as title
sponsor of NASCAR's top race series. With wireless company Nextel
replacing Winston, NASCAR has made an effort to distance itself
from its tobacco chewing, cigarette smoking image.

"They were appropriately loyal to their sponsor,'' Kapur said.
"We understood and moved our efforts to other areas. But when the
opportunity came for us to get back in, we were thrilled.''

GSK Consumer Healthcare has a long relationship with NASCAR,
positioning its Goodys Headache Powder as the "Official Pain
Reliever'' of NASCAR since 1977.

Now NASCAR is allowing the company to bring a traveling exhibit
to 23 races this season with counselors on hand to help NASCAR fans
quit smoking. GSK has also signed Richard and Kyle Petty to make
track-side appearances on behalf of Nicorette.

"It's long proven that many NASCAR fans are smokers and they
are heavy smokers,'' Kapur said. "We've also found that many of
them would like to quit smoking. So for us, this was the perfect
place for us to be, especially because of how supportive NASCAR
fans are of the sponsors.''

Just one tobacco product will be a Nextel Cup sponsor this year:
Victory Brands will back driver John Andretti.