He has followed the plan of his Richard Childress Racing crew all season, and there's certainly no reason to deviate from it now that he's atop the points standings with just nine races left. Harvick's ascent took another step at New Hampshire, where he won the Sylvania 300, the first race of the Chase for the Nextel Cup.

"At the beginning of the year, nobody would have expected us to be sitting in this spot, so we have kind of run from the underdog role from day one. It has kind of been nice to fly under the radar and just have fun with it."
-- Kevin Harvick

"Right now, we are doing what we have done all year, which is race week to week -- at least I do. I know [the crew members] have a lot of planning and work to do at the shop, and I feel like they have laid out their plan with the cars and how we want to race them," Harvick said. "We have stuck to our plan pretty much through everything. We are looking forward to going wherever it is we have to go and see where it falls. We are just going to race as hard as we can and take the most out of the weekend."

The veteran has certainly done that of late, with wins at Watkins Glen, Richmond and New Hampshire to go along with April's triumph at Phoenix. No matter how the Chase ends up, this is by far Harvick's most successful Cup season.

Although the Busch Series title appears a formality for Harvick, the Cup championship would be the Holy Grail. For now, he said the year has been phenomenal.

"If it ended right now, I think we would be happy and know we have really improved upon where we were in the past. Right now, we are having fun and trying to race to win," said Harvick, who was third at Dover in June. "At the beginning of the year, nobody would have expected us to be sitting in this spot, so we have kind of run from the underdog role from day one. It has kind of been nice to fly under the radar and just have fun with it."

Harvick holds a 35-point margin over Denny Hamlin, something that can vanish in the blink of an eye at the high-banked 1-mile concrete oval. That's just one reason Harvick's doing his best not to get too excited.

Admittedly cocky in the past, the Bakersfield, Calif., native is trying to let his racing do the talking.

"You don't want to stick your foot in your mouth. Maybe at the end of the year, you can become a little bit proud of what you have done, but right now, we just want to keep doing what we are doing," Harvick said. "We don't want to fall on our face. We want to stay competitive and contend for the championship. Sure, we are confident in our cars. I am confident, [crew chief] Todd [Berrier] is confident, everybody is confident, but we aren't going to get cocky about it." 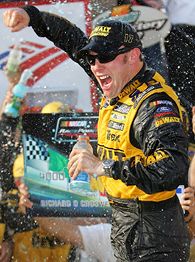 Hamlin, the first rookie to make the Chase, finished 11th at Dover in June after pit-road contact with another car left him a lap down for a time. Once back on the lead lap, he couldn't crack the top 10 but still salvaged a strong finish.

Fourth at New Hampshire, Hamlin is taking things as they come.

"I feel like, short of winning last weekend at New Hampshire, we came out and did exactly what we needed and wanted to do," he said. "We ran in the top 10 most of the day, managed to avoid trouble out there and we were able to race for positions at the end. That is what we felt we had to be able to do to contend. Looking around us, it was all Chase guys running for position, and if we wanted to leave New Hampshire in good shape, we couldn't get beat by many of those guys."

Third in points and the favorite of many entering the Chase based on his strong runs all season, Matt Kenseth said Dover's one of the most physically demanding tracks drivers face each season.

The thing is, it's a place that always will be special to him. And that has only a little bit to do with the fact that he won at the track back in June.

"It was the site of my first Cup start back in '98 when I replaced Bill Elliott, whose dad had passed away. No one knew who I was, and we got a sixth-place finish that day," Kenseth said. "It seems we've been real hit or miss at Dover. Sometimes we're real good and finish in the top 10, other times something freak will happen and ruin our day.

"Hopefully, we can hit on the setup again this weekend, with the same car we won with in June, and maybe pull out another top-five finish. Maybe, with a little luck, even challenge for the win."

While Harvick has been busy winning races of late, Jeff Gordon has been plugging away. He once was dominant at Dover, but it hasn't been one of his best tracks lately.

But having crunched the numbers, Gordon's not focusing solely on wins. Consistency can win the championship, and from that perspective, he's doing just fine sitting fourth in points.

"A win would be great for us, but we know we don't have to win a single race to win the championship," Gordon said. "The average finish of the champion last year was 8.7, and our goal during these final 10 races is to do better than that."

The Chase understandably will be the focal point this weekend, but Tony Stewart once again will be looking to crash the party. It can be argued that the defending series champion, who missed the Chase this time around, would have been there if he hadn't been forced to yield to relief driver Ricky Rudd at Dover in June.

A broken collarbone kept him from attacking a track where he has won twice.

"That was one of the hardest days of my life -- having to watch my car go around the racetrack without me in it," Stewart said. "I'm really looking forward to going back. We've typically run well at Dover, and I feel like it's a great opportunity for us to go back and try to get a win."

Mark Ashenfelter is an associate editor at NASCAR Scene magazine, which has a Web site at www.scenedaily.com.