Danica Patrick has been thinking about Anna Kournikova.

One season after she burst onto the auto racing scene as a rookie, Patrick has yet to win a race; and that has caused some to draw a comparison between the attractive driver and the Russian tennis beauty who failed to win a WTA singles title during her eight-year career but became a modeling and marketing sensation.

She placed eighth at this year's Indianapolis 500. She was fourth last year, and coming into this 500, the extremely media-savvy Patrick apparently came to interview sessions prepared to address the comparison.

The 24-year-old driver had at the ready the fact that Kournikova was once ranked second in the world in doubles. (Kournikova actually was ranked No. 1 at one point, but Patrick's research is very impressive, nonetheless.)

"Who can say they were No. 2 in the world at anything?" Patrick said. "Not very many people. You have to respect that. If she was just a girl in Russia, maybe she would have been pretty enough to be a model. But you wouldn't have seen her in any advertising." 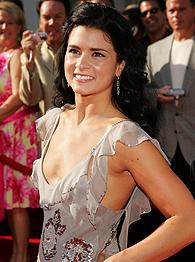 We know that Anna was 0-for-122 in singles tournaments and that Sunday's Indy 500 will be only Patrick's 20th race, so perhaps it isn't fair to associate her IndyCar record with Kournikova's inability to win. But Patrick was ready this week with another statistic that clearly took someone some time to research.

The researcher could have been her public relations manager, Brent Maurer, who is known to shake his head and crack a smile when Patrick has something smart to say.

"Of the drivers in the [Indy 500] field last year, it took the average driver 33 races to win their first race," Patrick said. "And there are some darn good drivers in the field, and so that's next year for me already. So it's not like I'm behind schedule or anything."

While it might be too early to worry that Patrick's record might parallel Kournikova's career, the similarities between the driver and the tennis player are clearly there.

Like Kournikova, Patrick has pulled in millions of dollars in endorsements, to the point that she out-earns everyone with whom she competes on the circuit. And as in Anna's case, the range of her endorsements indicates that she appeals to a broad demographic.

Patrick is on Hostess boxes to appeal to kids, and in Secret deodorant advertising to appeal to teenage girls. Her deal with Peak antifreeze is aimed at the attention of the 35-year-old man, and the executives who signed her to endorsement contracts with Tissot watches and Argent Mortgage obviously think Patrick's presence can reach both sexes.

"She's such a compelling story that we've seen that she appeals to everybody," said her team owner, Bobby Rahal. "I've been approached by 70-year-old men who have told me that they love how Danica is taking it to the boys. That same attitude has been verbalized by women and mothers."

And like Kournikova, who helped double the sales of a particular tennis string thanks to her photo on its packaging, Patrick sells. This year, she's the only IRL driver with her own merchandise trailer, and more Danica-related items have been sold on eBay this year than for any other driver. Her popularity even challenges that of top NASCAR drivers.

According to a Sports Business Journal poll, Patrick is almost as well known as Nextel Cup champion Tony Stewart; and she is more liked than Dale Earnhardt Jr. and Jeff Gordon.

When a reporter mentioned that Kournikova seems to have faded from the marketing scene recently, Patrick was ready with a response once again.

"She got injured," Patrick said, implying that if Kournikova could continue to play competitively, she would remain relevant. 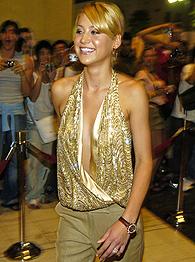 Perhaps the most refreshing thing about Patrick is her blunt honesty. Asked if she -- or Kournikova, for that matter -- deserves to be making millions in endorsements, Patrick replied with a big Why not?

"There are plenty of people who are more famous or popular and earn more money in endorsements because they can, and they should," Patrick said. "If they don't, they're just silly."

And despite her failure to get the checkered flag so far, her sponsors don't seem to be complaining.

"We all wish that she will win in the future, but we look more to her personality and the attraction that she has become on a global level," said Olivier Cosandier, brand manager for Tissot. "And so whether she wins or not, she's still very good for us,"

Patrick estimates that only about 30 percent of the questions she gets from reporters are about her racing, anyway.

"For the most part, [the sponsors] like coverage; and I'm fortunate enough that I'm a driver who gets coverage," she said.

Although Patrick hasn't been winning, her peers almost unanimously call her the best woman driver ever to hit the track. That figures to help keep her in the spotlight, which didn't happen for Sarah Fisher, one of her recent female predecessors in open-wheel racing.

Fisher, who was voted the most popular driver in the IRL from 2001 through 2003, won a pole position and came in second in one race in 2001, but has since faded into irrelevancy on the big-time racing scene. She is currently attempting to get sponsorship for a car to run in the NASCAR Truck series.

One of the reasons for Fisher's fall, fellow IRL driver Bryan Herta said, is that she tried to make the jump from midget cars directly to the Indy Cars, which created a developmental gap. Patrick took the more traditional route of driving karts and racing in lower circuits before she advanced to the top level of open wheel racing.

"Sarah came right into Indy cars, and you can't learn all the fundamentals if you don't go through each step in the training ladders," said Herta, who finished third in the Indy 500 last year and fourth in 2004. "Danica has done all that."

Said Rahal: "I didn't hire her as just some sideshow, a way to create some quick return in some way. Because I felt if we did that, it would be hugely unfair to her and we wouldn't be successful."

Unlike Kournikova, whose love life has been the subject of numerous rumors and whose relationships with celebrities such as Sergei Fedorov and Enrique Iglesias made headlines, Patrick has made little secret of her marriage in November to physical therapist Paul Hospenthal. And while some marketers have hinted that the huge ring on Patrick's finger might hurt her appeal with the male demographic, Rahal said he isn't concerned.

"I think it could disappoint a lot of young guys out there, but I don't think it's going to have an effect," Rahal said. "In fact, it may enhance her marketing. Racing is a pretty conservative world, and the fact that she's married might be a plus in a lot of people's minds. But I think that, in the end, they will follow and cheer for Danica for what she represents."