DETROIT -- The automotive industry of Detroit has been the heartbeat of many innovations in both passenger cars and auto racing.

Whether it's safety innovations with antilock brakes on the family car or electronic sensors that can monitor every function of a race car, Detroit has left its mark and enjoys its reputation at "Motor City."

But there's another innovation that began in Detroit:

That's right, long before Tony Stewart could take credit for climbing the fence after a NASCAR victory, the fence climb was born in Detroit, courtesy of Helio Castroneves.

When the popular Brazilian driver won his first race in CART at the 2000 Detroit Grand Prix, emotion took over. It wasn't a premeditated act, it just happened.

It was also the moment Castroneves burst onto the scene. He knew that he had earned his ride at Team Penske because of unusual -- even tragic -- circumstances.

Castroneves was actually the third choice for the two driving positions on the team in 2000. After the once-mighty team had fallen upon hard times in the 1990s, owner Roger Penske was determined to return the team to its glory days.

First, he hired Tim Cindric as team president. Cindric was a key member of Bobby Rahal's CART team, and Penske realized it was time for some fresh thinking to take charge of the operation.

Penske and Cindric chose two drivers to lead the team back to prominence and introduced them the day before the 1999 CART season finale at California Speedway.

Gil de Ferran was chosen for car No. 6 and Greg Moore would drive car No. 3 beginning in 2000. 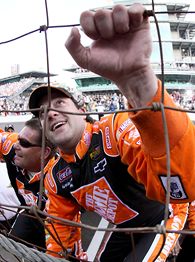 Moore never got that chance -- he was killed the next day when his car sped across the grass off the apron to the second turn, hit a service road, and slammed, top side first, into an infield retaining wall.

Moore would die from serious head injuries, and it dealt a stunning setback to the team's plans.

Meantime, Castroneves was another young Brazilian driver toiling in relative obscurity for Hogan Racing. Times were so bad that team owner Carl Hogan had announced he was leaving the series at the end of the year because he was unable to find a sponsor.

Penske and Cindric chose Castroneves to take over the car that was originally going to Moore.

All those thoughts went through Castroneves' mind after he took the checkered flag to win the 2000 Detroit Grand Prix.

"I have to say, the way I started on the team, with Greg Moore's death and the end of my season in 1999 with Team Hogan folding, I lost a lot of opportunities," Castroneves said. "But then everything came in the right direction. It was really bright. I was getting used to the team, I was getting used to my teammate, Gil de Ferran, and I was learning a lot of things."

He was learning how to win, and by the time he got to Detroit that June, Castroneves was ready to take the checkered flag.

"It was the slowest five laps that I can remember when they were counting five. It took forever. I saw Max Papis coming from behind and I said, 'No Max, this is my race.' I remembered it was so quick, but it was so cool.

"When I was crossing the finish line, I could not believe it. I was unbuckling my belt and the car was still running. I was crying and screaming. I wanted to get out of the car and start jumping, like when someone scores a goal in soccer. I wanted to run. So I went straight to the finish line. I don't know why.

"I saw the crowd go crazy; I ran to them and climbed the fence. It was a crazy move, but it turned out to be very good."

A signature celebration was born with the Detroit skyline in the background. The fans loved it, the media loved it and even the stuffed shirts who ran the CART organization loved it.

"When I did it the first time, Bobby Rahal was the CEO of CART at that time and asked, 'What did you do?' I said, 'I'm sorry, it wasn't intentional.' He said, 'No, it was the best thing ever,'" Castroneves recalled. "Then the next year, I got fined for doing it because it needed to be at a spot where the TV cameras could get it. Joe Heitzler, the other CEO of CART, fined me but ripped up the check in front of me.