When worn by a NASCAR driver, his uniform, also known as his firesuit, is a walking billboard for the many companies who sponsor the race team. But while advertising the sponsors is one function of the firesuit, its main purpose is safety. 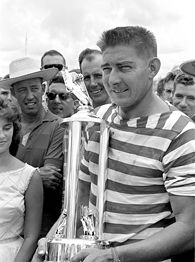 In the early days of the sport, drivers typically raced in whatever they felt comfortable wearing, which usually meant a short-sleeved shirt and dungarees. It wasn't until the mid-1960s that fire retardant clothing became the norm.

The change came after the ironically named Glenn "Fireball" Roberts was severely burned in a crash in the 1964 World 600 at Charlotte Motor Speedway. Roberts, a fan favorite, survived the crash but died of complications six weeks after the accident.

Although NASCAR had always recommended that competitors wear protective clothing while racing, it wasn't until 2002 that the NASCAR rule book required it. That was also the first year that any pit crew member going over the wall was also required to wear a firesuit.

When ESPN started covering NASCAR races in 1981, pit reporters wore street clothes. That changed in the mid-1980s when a fire erupted in Richard Petty's pits during a pit stop at Atlanta. Dr. Jerry Punch was covering the pit stop and was wearing an ABC Sports blazer (the race was on ABC). Jerry helped pat down the fire on Petty's gas man, but in the process, one of the sleeves on his blazer melted, the ABC flag on his microphone melted and his eyebrows and moustache were singed. Punch said Jeff Mason, who was the coordinating producer, decided on the spot that pit reporters would wear firesuits.

Dave Nelson is West Coast operations manager for Simpson Performance Products, which has been manufacturing racing firesuits since 1959. In Nelson's 22 years with the company, he's seen the evolution of today's firesuit.

"Our No. 1 goal has always been driver safety," Nelson said. "That's never changed. Nomex, a flame-resistant fiber made by DuPont, has been around for 40 years, and that's what we use to make the suits. But the performance of our fabrics has changed, and even the function of the suits has changed."

"NASCAR mandates that firesuits must have an SFI-approved rating. SFI is a nonprofit foundation that certifies that the product meets certain standards. SFI does several tests such as a flammability test, a thermal shrink test, and thermal protective performance tests. They set the standards and we apply them."

The thermal protective performance (TPP) measures the length of time the person wearing the garment can be exposed to a heat source before incurring a second degree burn. NASCAR requires drivers and any crew member handling fuel to wear a one-piece firesuit meeting SFI 3.2A/5. The TPP value of this category of protection is 19, which translates to a time of 10 seconds.

Over-the-wall pit crew members are required to wear fire resistant uniforms with an SFI rating of 3.2A/1, which has a TPP value of six and a protection time of 3 seconds.

But these standards are just the minimum. Nelson is quick to point out that he always recommends more.

"With SFI rating, we always try to exceed the minimums," he said. "Some brands just barely make the minimum. I compare it to car insurance. You have your minimum protection and minimum liability, and then you have full protection. I'd rather have the full protection when I need it and suffer with a little bit more weight so if there was a fire, I'd know I had the best protection possible." 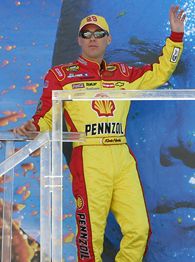 "We want to get the driver comfortable and make sure he's safe, and we always want to be above the minimum," Nelson said. "Nomex averages about 14 to 16 ounces per square yard, and to make a Cup suit, it takes around 3 yards, depending on the size of the person. But while weight is a factor, once you start to decorate it with embroidery and special trim, the weight difference goes out the door anyway."

That's because all of those sponsor logos embroidered onto the uniform add weight.

"In 1985, we were doing very little embroidery," Nelson said. "That was mostly just the driver's name and maybe some small little logos. Most of it was patches. Embroidery didn't start to take off until the mid-80s, early '90s when NASCAR really began to grow in popularity."

With the demand for custom firesuits at an all-time high, Simpson Performance Products employs about 130 people at its California plant dedicated only to the manufacture of firesuits and crew uniforms.

"About 60 percent of our business is NASCAR," Nelson said. "Our busy season starts from the end of December into March where we're just trying to fill NASCAR orders. A lot of teams run six races for this sponsor and eight races for that sponsor, so they need different uniforms for the different sponsors. We also can rise to the occasion when a driver is changed within a weekend and they put someone else in a car. There have been numerous times that they give us anywhere from just three to five days to get a uniform done. With us on West Coast time, there have even been times when our reps called us from North Carolina and we had suits done in one or two days for an emergency. We can turn that around, although there may be a premium cost for it."

The price for a custom-made firesuit meeting NASCAR specifications averages $900 to $2,000, depending on embroidery, trim styles, color, and design.

"The goal is to get a lightweight suit that is going to give maximum protection for the SFI rating," Nelson said. "And always remember that safety is the bottom line."