MONTREAL -- When you're surrounded on all sides by people, by noise, by confusion, you take whatever quiet moments you can get, even if you have to create them yourself. 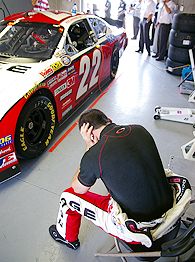 That's the only way Patrick Carpentier is able to find peace during what can arguably be considered the most hectic professional weekend of his life.

To find one of these moments of solitude on Friday, as the pressure intensifies and the attention increases around him, Carpentier picks the most chaotic spot he can find -- inside the Busch Series garage of the No. 22, a cinderblock box that measures roughly 15-BY-30 feet and contains, at this moment, 15 people -- and closes his eyes. He leans back in a folding chair as comfortable as a rock, his upper body slumping, left leg bobbing slowly. He folds his arms across his chest. His glasses rest atop his short black hair. The action continues around the car at his feet. He leans forward, putting his hands over his ears, eyes still closed. A photographer standing three feet to his right with a lens two feet long snaps off a series of photos, flash popping repeatedly. A TV cameraman six feet to his left films his every snooze. Crew members whiz inches past his head while carrying brake rotors, engine parts, bottles of water. But inside his head, isolation.

Suddenly, he stirs and rises from his chair. Despite everything going on around him, it looks like he was actually sleeping while in that awkward pose. Makes sense that a guy who makes his living harnessing horsepower would sleep the way a horse does.

He had earned the rest. Earlier in the day, he had sat for a harried 10 minutes signing 75 autographs, one after the other, a smiling assembly line. He signs hats. He signs T-shirts. He signs lots and lots of ticket stubs.

"You raced with my son," one man says in French. "Your brother gave me these tickets," says another. "We're so proud of you," adds a third. Carpentier reacts the same to each, including them in his inner circle for a brief moment before the line moves and they are gone, replaced by a new, temporary friend. To everyone, he is "Pat."

His scheduled time lapsed, he leaves the
tent and many unsigned autographs behind, signing a few as he walks and apologizing to others. Mere steps out of the tent, the sky evacuates, the rain causing him and his two-man crew to dash to the nearest shelter, a media dining tent. He sits at a table, foam plate bearing a ham sandwich, a slice of watermelon and two curves of canteloupe. Behind him, a TV plays a promo he filmed for the race on RDS, the French-Canadian version of ESPN. He takes one bite of his sandwich before a photographer introduces himself. Carpentier shakes the man's hand like he's an old friend.

None of this activity slowed him down when it counted, either. He navigated the track in the fastest practice speed of the afternoon session, getting around the circuit in 101.948 seconds, ahead of Marcos Ambrose, Max Papis, Ron Fellows and fellow Canadian Michael Valiante.

"If I'm in the top five, top eight, I'll be very happy," he said of what he hopes to accomplish on Saturday.

When he briefly steps out of the garage for an interview, the fans in the grandstand across the track cheer loudly. "Pat! Pat!" they shout. He quietly acknowledges them, waving and smiling.

During the downtime, while the track is drying and the Busch car is being tweaked, he has time to answer some rapid-fire questions.

Driver influences? "The first was Gilles Villeneuve. After that, nobody, really."

He then chats with Las Vegas neighbor and fellow Quebecer Alex Tagliani, who's sitting in his NASCAR Canadian Tire Series car, waiting to qualify. That done, he poses with track officials and firemen for a photo, then eats what's left of his makeshift lunch of chicken and sausage shish kebob, and green and yellow beans, at one point gesturing with his fork to crew chief Paul Wolfe while talking about the track.

Not long after, Carpentier's wife, Anick, arrives. The two embrace briefly but warmly, and soon Carpentier is called away to do a TV interview, then another, then another, alternating between French and English. 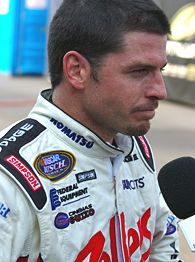 Fans gathered outside his garage hoot at him as he talks, and he smiles, waving to them below the camera's lens. The gathering here is the larger than any other in the garage, by far. He meets and greets officials from Dodge Canada, smiling and appreciative of the ever-valuable support they've provided. He moves on and autographs photos of himself while eating one of two buns given to him.

When you move as fast and as often as Patrick Carpentier, you always need fuel.

His time on two feet draws short, and soon he's in the Grand Am car, jockeying it around the track to third spot before giving it up to co-driver Kris Szekeres.

More driving is to come: He's got Busch Series qualifying at noon on Saturday before the race gets the green flag at 3:30 p.m. ET (ESPN2). It's a given that there will be much eating between now and then.

Paul Grant is a senior coordinator at ESPN.com.