JOLIET, Ill. -- Danica Patrick's father is exploring the possibility of the popular Indy Racing League driver moving to NASCAR as soon as next year, the Chicago Tribune reported Monday. 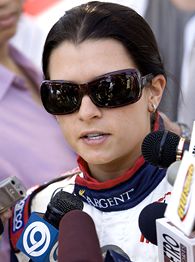 The Tribune reported that T.J. Patrick, who has managed Danica Patrick's career since childhood, was in exploratory talks with some NASCAR teams at Chicagoland Speedway on Sunday.

"I'm trying to get her here [into NASCAR]," T.J. Patrick told the Tribune.

The Tribune reported the couple was in the Nextel Cup garage area as guests of Roush Racing, which fields drivers Mark Martin, Matt Kenseth, Carl Edwards, Greg Biffle and Jamie McMurray and runs Fords on the Nextel Cup circuit.

Roush team president Geoff Smith said the team gave Patrick's family members passes as a favor but had not had serious discussions about adding Patrick to the team.

"If she's interested, all they have to do is pick up the phone," Smith told The Associated Press. "But they haven't picked up the phone."

Danica Patrick's contract with Rahal-Letterman Racing team ends after this season and the Patricks are negotiating with other IRL teams as well as NASCAR teams, the Tribune reported.

Team spokesman Brent Mauer declined to comment on the report Monday but confirmed that the Rahal team has been discussing a contract extension with Patrick.

Patrick, who became IRL's most recognizable driver by leading part of the 2005 Indianapolis 500 and finishing fourth, has yet to enjoy similar success in 2006, as Rahal-Letterman has endured a frustrating season.

Rahal-Letterman, which enjoyed a power advantage by running Honda engines in 2005, lost that advantage when the entire league shifted to Hondas for 2006. It was the last team to use a Panoz chassis and struggled to adjust when it finally switched to a Dallara, used by every other team in IRL, after the Indy 500. And the team lost one of its drivers when Paul Dana was killed during practice before the IRL's season-opening race in Homestead, Fla.

T.J. Patrick said he didn't think his daughter would have trouble making the transition from IndyCars to much-heavier Nextel Cup cars, but he said the longer NASCAR schedule could be a concern.

"There's just so many races," he told the Tribune. "That's what scares her more than anything. It's 38 weekends."

Would Patrick be welcome in NASCAR?

Stock-car icon Richard Petty said in May that women had no business getting behind the wheel, but today's drivers seem more receptive to welcoming Patrick.

"That would be another huge one for sure," Martin said. "I think it would be great, absolutely fantastic. She is definitely a major, major, major draw. It would be fantastic to see her getting involved at this stage in her career, which is in the early stages. It would give her enough time to really adapt to the cars and everything and make a go of it."