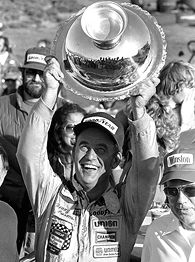 Parsons, the 1973 Cup champion was diagnosed two weeks ago after he had
trouble breathing. Parsons, a former ESPN NASCAR analyst, currently is a commentator for NBC and TNT.

"Needless to say this was a huge shock," Parsons said. "The
first thing everyone asks me is, 'Are you a smoker?' The answer is
that I smoked my last cigarette way back in 1978, and since then
I've hated being around smoking.

"I don't even allow anyone in my foursome to smoke on the golf
course."

"I'm determined to pull through this and I appreciate
everyone's concerns and prayers during this time," Parsons said.
"Everyone I work with has been gracious and accommodating. I plan
to keep on talking about racing for as long as I can."

Parsons plans to remain in the booth during his treatments.

"One of Benny's greatest qualities is how unconditionally
supportive he is to the racing community," said Dick Ebersol,
chairman of NBC Sports. "Now it's our turn to provide that support
to him. I ask all of his friends and fans to put him in their
prayers tonight."

Parsons was born at his parents' rural home in Wilkes County and eventually moved to Detroit, where he worked at a gas station and a cab company owned by his father. After winning back-to-back ARCA titles in 1968-69, he returned to North Carolina in Ellerbe to become a full-time racer, often listing "taxicab driver" as his occupation on entry forms.

Parsons began his broadcasting career in the 1980s as a pit
reporter for ESPN and TBS, when he was still racing a partial
schedule. He moved into the booth for good in 1989 for ESPN and won
a Cable ACE Award for best sports analyst.