RICHMOND, Va. -- Robert Yates will retire at the end of the season and hand control of his race team to his son.

Doug Yates will own and operate Yates Racing beginning Dec. 1. The team will use the car numbers and owner points from Robert
Yates Racing and will field cars for David Gilliland and Travis Kvapil. 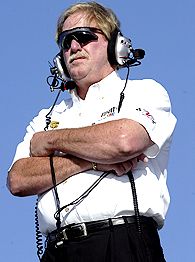 Sources told ESPN.com's Marty Smith that Kvapil, current driver of Roush Fenway Racing's No. 6 Ford in the Craftsman Truck Series, will replace Ricky Rudd in the No. 88 Ford for the 2008 Sprint Cup season.

The Friday night announcement erased the merger announced last month between RYR and the Newman/Haas/Lanigan Racing team from the Champ Car Series.

"The goal of the [merger] was to build a team to contend for the championship," Robert Yates said in a statement. "The more I
thought about it, the more I realized instead this was the perfect opportunity for me to pass the torch to the next generation.

"I'm closing this chapter of my life, and I cannot wait to see what is in store for me next."

RYR won 57 races, 48 poles and the 1999 Cup championship with Dale Jarrett since its inception in 1989. The team fielded cars for Dave Allison, Ernie Irvan, Rudd, Kenny Irwin and Elliott Sadler.

The team currently fields Cup cars for Rudd and David Gilliland, and the two started on the front row for this year's season-opening Daytona 500. RYR also fields a Busch Series car for Stephen Leicht.

The team has fallen on hard times of late. Gilliland is 28th in points, Rudd is 30th and neither has won a race this season. Rudd is retiring at the end of the season.

"There's no question Robert has struggled with this decision," said Dan Davis, director of Ford Racing. "Although this will allow him a chance to step back from the day-to-day pressures of running a championship race team, I'm sure he will always be available to
provide input and advice when asked.

"He's a legend in this sport, and we at Ford Racing are grateful for everything he has done over the years with us. A guy who has 57 wins and a championship in this sport has earned his rightful place among the best in this sport."

Doug Yates said his team will continue its alliance with Roush Fenway Racing, which helps with chassis and engineering support.
The two teams share an engine department.

"I am very excited to carry the Yates Racing heritage into the future, [and] I believe I have the experience and understanding of
the competition and business requirements that are necessary to be an effective team owner," Doug Yates said.

"My first order of business is to revamp our infrastructure into one that can field race teams that can compete successfully
with the pre-eminent teams in the sport. I personally think the best business and competitive model in the sport to emulate for long-term success is that of Jack Roush and Roush Fenway Racing."

Information from The Associated Press and ESPN.com NASCAR analyst Marty Smith was used in this report.