NHRA Funny Car driver Eric Medlen remained in critical condition Tuesday after he was seriously injured in a testing accident at Gainesville, Fla., on Monday. 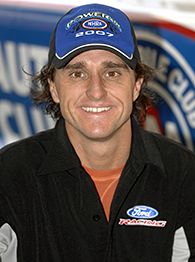 Doctors placed Medlen in a medically-induced coma at the surgical intensive care unit of Shands Hospital at the University of Florida Medical Center, where he is listed in critical condition. John Medlen, Eric's father, said doctors are trying to reduce the pressure and swelling from what has been described as a severe closed head injury.

Medlen's Mustang Funny Car dragster crashed head on into the right guard rail after it blew a tire on a test run the day after the Gatornationals at Gainesville Raceway.

"We would ask everyone to keep Eric and his family in their prayers while at the same time respecting their need for privacy in this very difficult time," said John Force Racing spokeswoman Kelly Antonelli.

Medlen, 33, is one of four drivers for John Force's team. All four JFR drivers -- Force, Robert Hight, Ashley Force and Medlen -- stayed in Florida an extra day for the test session.

Medlen is competing in his fourth season as a driver. He won six NHRA events in his first three seasons and finished a career-best fourth in the 2006 Funny Car standings.

Medlen spent eight years as a crew member for Force's Funny Car, learning the mechanical side of the sport from his father, John Medlen.

John Medlen, who is Eric's crew chief in the Castrol/Syntec Mustang, was the crew chief for Tony Pedregon when Pedregon won the NHRA Funny Car title for John Force Racing in 2003.