OUARZAZATE, Morocco -- South African motorcyclist Elmer
Symons died Tuesday in a crash during the Dakar Rally, a grueling
race that has been marked for years by deaths in the African
desert. 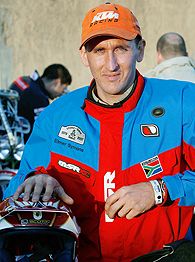 The 29-year-old rider was killed during the fourth stage from Er
Rachidia to Ouarzazate in Morocco, when he crashed about 88 miles
into the 251-mile leg, race organizers said. A medical team rushed
to his aid by helicopter, but he was pronounced dead. No further
details were immediately given.

Symons was competing in his first Dakar Rally after assisting on
previous races and had been in 18th place overnight.

Jean-Louis Schlesser of France won the stage, and Carlos Sainz
of Spain retained the overall lead. Schlesser and his
Schles-Ford-Raid car finished in 3 hours, 59 minutes, 54 seconds
for his 14th career stage win.

This year's Dakar Rally covers 4,918 miles through Europe and
Africa. The race finishes in Dakar, Senegal, on Jan. 20.

Two years ago, 2001 and 2002 champion Fabrizio Meoni of Italy
and Juan Manuel Perez of Spain, both motorcyclists with KTM, were
killed.